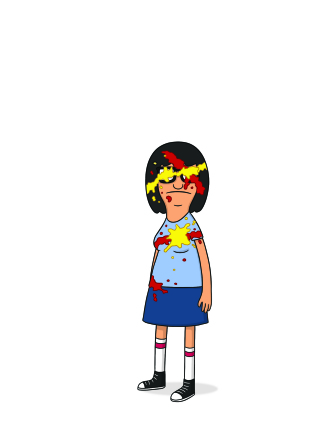 The third season of BOB’S BURGERS made its way to Netflix Instant last week. The show sharpens its already solid mix of sincerity and irreverence, but this third season is most interesting in how it twists the theme of growing up, displayed by eldest daughter Tina Belcher (Dan Mintz), into something less resembling the problems of an early adolescent girl and more like what the currently adrift postgrad generation experiences.

That’s right, Tina belongs to the Millennials, if only by the thinnest of margins – she’s 13, which would put her at the tail end of the generational divide. BOB’S BURGERS has recognized this and spends the third season exploring what this means.

Previously, Tina had been a hilarious weapon for the series’ writers to use sparingly, whenever they had funny memories of growing up gangly and baffled around the opposite sex. As funny as those moments are – her unending devotion to butts is of particular amusement – they still represent a fairly limited well of storytelling. The Tina who writes erotic friend fiction, obsesses over Jimmy Jr.’s derriere, and loves her horses – although the show has always done it exceedingly well, these remain evergreen tropes for a certain type of lonely character – remains, but in season three, series creator Loren Bouchard and his staff have shifted the Tina focus into a grander narrative of being confused not only with boys, but with the world as a whole.

Take, for instance, her driving lesson at the start of the season’s seventh episode, “Tina-rannasaurus Wrecks.” Tina’s father, Bob, gets the bright idea to let her drive his car in a mostly empty parking lot as a treat for helping him run errands. Tina’s unsure and antsy, but she hops in the driver’s seat and says with faux confidence (re: terrified trepidation), “Let’s make this kitty purr.”

What follows is perhaps the greatest slow-burn visual gag in years. Despite Bob’s initially reassuring tone, Tina starts groaning in the way only she can as voiced by Mintz (“Uuuuuuunnnnnnngggggh.”). She knows exactly what needs to be done, but it’s scary. She’s paralyzed. She’s also not moving beyond idle speed, which builds the comedic value exponentially the closer she gets to the only other parked car in the lot. Increasingly frustrated and later panicked, Bob tells her all she needs to do is turn the wheel slightly in either direction, and later to brake, but this goes about as well as you would expect.

I cannot think of a better visual depiction of my generation’s march to adulthood. For a certain subset of squeaky wheels who get the oil (nice to meet you), we Millennials are known to procrastinate, complain (“Uuuuunnnnnnggggghhh.”), and otherwise meet our obligations as slowly as we possibly can because our dream jobs aren’t exactly available to us anytime soon (Thanks, economy). Our parents, older siblings, the media, the occasional mentally ill homeless person on the street, give us roadmaps (“Go ahead, turn one way or the other.”) to success that we ignore as we barrel headlong into avoidable problems.

We are easily roped into things we’d rather not do in order to please others. BOB’S BURGERS has an episode dedicated to that, too, with a surprisingly dark undertone. When Tina’s sister, Louise (Kristen Schaal) goes on a spite rampage to upset her new science teacher, she enlists Tina to play Topsy the elephant, infamously known for being electrocuted in public by Thomas Edison, in her science fair project. Louise utilizes unauthorized adult help to construct an electrocution pad that may or may not have protection safeguards. She has Tina, decked out with a trunk of Scotch taped toilet paper rolls, step aboard. Tina’s verbal nervousness takes a different tack (“Ah! Ah! Ah! Ah!” in hilarious perpetuity) but the heart of the matter remains the same: she’d rather do something else to get by.

Rob Samuelson is a freelance writer and blogger interested in narratives of all kinds – film, TV, songs, politics, sports. You can read him at defeatingboredom.com and see the names of Chicago sports players in all CAPS when they score on his Twitter account, @Rob_Samuelson.