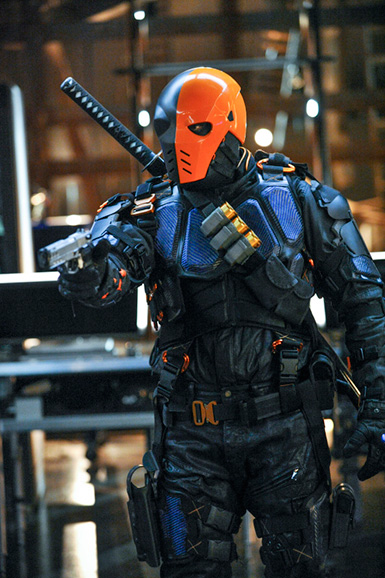 Gotta give props to ARROW for the spectacular use of the character Slade Wilson (Manu Bennett). You don’t just bring in a character like that and use him sparingly. ARROW has gone full tilt towards the Oliver Queen/Slade Wilson ultimate face-off — and with each new battle, we are reminded that Slade Wilson is not in this to win on just one front, but all fronts. He has preplanned his battle strategy down to the finest nuance. He does not just want to kill Oliver (Stephen Amell) — he wants to destroy him; destroy Oliver from the inside so that he is in as much emotional agonizing pain as Slade is every day of his life, and to isolate Oliver so that he has no friends or allies left to turn to. It is a brutal, ruthless and efficient battle strategy and, to our horror, it is working.

As ARROW is working towards its big Season 2 finale, with five more episodes left to air, Slade’s diabolical plan is being revealed piece by piece and each more terrifying than the last. So do not be fooled into a sense of security or in thinking you know what Slade will do next. The man is legitimately insane, his mind warped irrevocably by the Mirakuru, and Slade’s reign of terror has only just begun.

In this week’s new episode, we see the fall out from Thea (Willa Holland) finding who her biological father is and the ramifications that has on her relationships with Oliver and Moira (Susanna Thompson).

There is also the aftermath of Slade’s bombshell that he dropped on Laurel (Katie Cassidy) — that Oliver is the Arrow. Interestingly, these two young women have very different ways of reacting to unexpected news, and it will lead both to examine their relationships with those closest to them in a new light.

As previewed, this episode also takes the time to introduce two key new characters Caitlin Snow (Danielle Panabaker) and Cisco Ramon (Carlos Valdez), who play a large part in the new spinoff series THE FLASH. It is a lot of fun seeing them interact with the ARROW heroes and they also shed some light on what has been going on in Barry Allen’s world since we last saw him.

Also back and probably up to no good is Isabel Rochev (Summer Glau). As if it were not enough that she betrayed Oliver and stole Queen Industries, Isabel has revealed that she is aligned with Slade Wilson — and any friend of Slade’s is someone to keep a very close eye on.

So in an effort to take an offensive approach with Slade, Oliver and his team try to anticipate what Slade needs to build his Mirakuru-enhanced army. It will be a race to stop Slade from using Queen Industries equipment and from getting his hands on any from outside suppliers.

But suffice it to say, there are more than a few bumps and bruises that come out of the next Arrow/Deathstroke face-off. In fact, someone ends up in the hospital with a cast. ARROW is not messing around with heroes that can literally bounce off walls forever. In the next few episodes, there will be real injuries and each hero will come face-to-face with the realization they are not superhuman and can be hurt and killed. The good news is that Slade can be too — it’s just going to be a lot harder than they thought.

This week’s episode “The Man Under the Hood” delves deeply into the lengths that everyone is willing to go to in order to protect Oliver’s secret identity as the Arrow and the pros and cons of knowing that tremendous secrets. With Detective Lance (Paul Blackthorne) sitting in a jail cell because of his alleged involvement with the Arrow’s activities and now that Laurel knows or thinks she knows the identity of the Arrow, the ball is in her court to determine how to best use that information. Is it a question of who she loves more or who she needs to protect more?

Hint: Two key elements to keep an eye out for in this episode: the skeleton key and scars.

“The Man Under the Hood” is a thrill-ride of an episode with all the action and snappy one-liners that fans have come to expect and love. So be sure to tune in for this week’s all new episode of ARROW on Wednesday, April 16th at 8:00 p.m. on the CW (CTV in Canada). What is the cost of knowing who the man under the hood is?