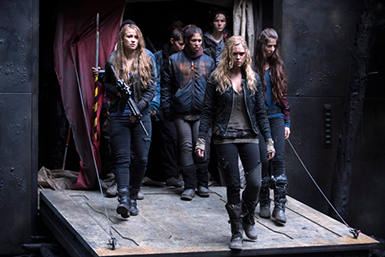 It has been teased, heightening anxiety to unbearable levels, but only one thing is for sure: the Season 1 finale of THE 100 is guaranteed to be mind-blowing. The final episode has no less than six scenes where everyone is going to think it is the end. But count each and every one of them. Anything less than six possible ending points and you have not reach the end yet.

Also teased, no one is safe and not everyone makes it out alive. This is true. THE 100 is a post-apocalyptic story of survival. Humanity struggled to survive for 97 years on the Ark and only in its final days did it attempt to ascertain if returning to Earth was a viable option. So the hundred were sent ahead and, to their surprise, found Earth was habitable. But unbeknownst to them, there also was a hostile indigenous population intent on eradicating the hundred, viewing them as invading aliens from space. So the return home to Earth was not easy and the Season 1 finale is perhaps the hundred’s last stand.

In a recent exclusive interview, creator and executive producer Jason Rothenberg talked about Clarke-Bellamy struggle for leadership and how each of the hundred rose to the challenge to become heroes in the face of adversity.

This season we saw a tug-of-war for leadership between Bellamy (Bob Morley) and Clarke (Eliza Taylor), yet in the finale, that seems to be finally resolved. Why now? What’s changed so that one of them concedes their power to the other?
JASON: I wouldn’t agree fully that they conceded their power. In my mind, Bellamy and Clarke have reached an understanding, which is Clarke obviously recognizes that there are certain things that Bellamy does well that she may not do as well, and certainly Bellamy has realized what a real leader Clarke is and the real importance of Clarke to the group. I feel like in Episode 12 when she was missing, Bellamy was spinning a little bit. He was losing it. We hadn’t really seen him like that. It wasn’t a romantic loss, it was more of “we lost our figurehead” or “our queen is gone,” and when she came back, she brought with her the hope of survival on many levels. Then, of course, Clarke and Bellamy do disagree hugely at the beginning of the finale on how to proceed. Bellamy hasn’t accept her edict that they are leaving. But he is left with no choice and she pleads with him in the beginning to come because she knows how much the group needs him as well. It’s more a story of both of them realizing the importance of the other to the group.

The other curious thing I took away from this season was how these were kids that were thrown away as juvenile delinquents, thrown away to be on this poisoned planet, yet as we watched their journey through the first season, they all ultimately became leaders and heroes in their own right — which was interesting.
JASON: In a lot of ways, they go through the crucible — “what doesn’t kill you, makes you stronger.” They were fuck-ups, many of them coming into the season, and this adventure, this stress that they lived under constantly really turns them into almost a military unit. Certainly by the end that’s true. I think that’s what happens. We send kids off to die in wars and fight in wars when they are 18 years old. That’s how old most of the hundred are. So someone signs up for the military and when they’re done, they are usually mature. It changes them in many ways and I think that’s what happened. I think it’s a good analogy for what the hundred go through. We throw them into the fire. Baptism by fire.

It shapes them and really quite quickly. It was interesting to see them willing to step up and be that way. To decide that they wanted to contribute and wanted to help each other that way.
JASON: Realistically, I think that is what happens. If you’re put in a dangerous situation, you will either take it seriously or you will die. And they realized pretty quickly that is what they had to do, and that’s what they did. That’s one of the things we sort of had planned all along that these juvenile delinquents were going to come together and they were going to survive. It’s a story about survival. It’s not a story about who’s romantically interested in who. It’s not a soap in this world. It’s a story of survival that has some romantic storylines. That’s certainly not what the show is about or should be about.

It also struck me that there were so many deaths and they happened so quickly in each episode. Who would you like to reflect back upon as deserving a “hero’s death” that didn’t get one?
JASON: The obvious answer for me is Wells (Eli Goree). I love how we did it, but it was not a hero’s death. I mean, he had just earned our respect. He had just, in some senses, cleared his name and *boom* he got killed in the most awful, unusual, surprising way. I think, in and of itself, that made that death land even more powerfully. That’s the one. Also we get a lot of credit for killing characters, but we really didn’t kill that many characters — main characters anyway, that we knew and loved. That’s not to say we won’t, but I feel we get a little more credit for that than we actually deserve.