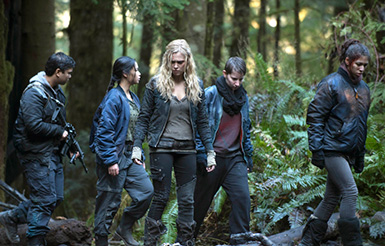 There was probably not a dry eye amongst all the fans after the Season 1 finale of THE 100. Everyone knew the second Clarke (Eliza Taylor) made the decision to close the drop-ship door with Bellamy (Bob Morley) and Finn (Thomas McDonell) stuck outside with the Grounders, that they were doomed — for the drop-ship rocket fuel disintegrated anyone within its blast radius.

So in an exclusive interview, creator and executive producer Jason Rothenberg talked about that last pivotal power-shift between Bellamy and Clarke and who might have survived in the end.

In that eternal struggle for power between Bellamy and Clarke, it felt in the beginning of episode the Bellamy was deferring to Clarke, but then when things didn’t quite go her way, Clarke conceded it back to Bellamy. Then towards the end, there was a more defining moment where it seemed like the power shifted more definitively, and that was kind of curious.
JASON: The moment when Clarke shuts the door, she had no choice but to do that. She realized in that moment, and it was kind of the end of the season long arc, that she cannot protect everybody. She’s unfortunately sacrificing the boy she loves — Finn, not Bellamy, in that moment and the boy that she’s really come to respect and realized his importance to the group, Bellamy — in order to save as many as she could. Had she not shut the door at that moment, they all would have died. It is something that will haunt her into Season 2, for sure.

In the end it seemed like Bellamy acknowledged that Clarke was in charge was was finally willing to follow her orders; like, “Okay, you tell us what to do and we’re doing it.”
JASON: To me, the season for them is about accepting the importance of the each of them. Clarke is the leader of that group and Bellamy is the rah-rah motivator. But Clarke is the brains of the operation. Bellamy is the heart and Clarke is the brain. I’m not sure how I’d quite put it, but they need each other. Without a brain, you die and without a heart you die. One without the other wouldn’t have survived; and the group wouldn’t have survived. It really needed both of them and for both of them to come together in the finale it was so they all could make it.

It was incredibly powerful. That was the one thing that really struck me the strongest when I was watching it, just watching them both concede their control to the other as needed and how they did it respectfully.
JASON: I was going to ask you: do you feel like there was any disappointment in either of them accepting of the other, control or power?

No, I thought they showed deference and respect for each other, which had been earned.
JASON: Exactly. It wasn’t like, “Oh my god, I can’t believe I’m giving power up.” Basically she says to him, “Alright, you’ve got your fight. We’ve got no choice. Now don’t fuck it up.”

And just because everyone is going to be dying to know, is there anything you can share about the fate of those who may have actually survived? Everything was just happening so quickly at the end of the finale it was hard to keep track.
JASON: Season 2 will certainly explain fairly quickly what happened. When Abby and Kane arrive at that drop-ship, they find nobody. Well, that’s not true. But they don’t very many people. I don’t even think you can talk about what their fate is until the Season 2 premiere. But they are not unlike Clarke, let’s put it like that.

It just happened so quickly in those finale minutes: the gas attack and then Clarke waking up in the white room in the hospital. So our brains are like: “What?! Where is everybody? What’s going on?”
JASON: It was by design. We didn’t want people to know where the ending was. There was another ending, by the way. There was another “holy shit!” moment that I pulled out and am saving for Season 2. There’s “mind-blowing” and then there’s just people being overwhelmed. We wanted to end with just blowing minds and not get make them feel overwhelmed.

So on that final ambiguous teaser, and while many fans are still likely screaming at their television sets in frustration over not knowing who lived or died in the Season 1 finale of THE 100, it does guarantee that they will be tuning in for the Season 2 premiere this Fall. So be sure to tune back in for THE 100 when it returns from its summer hiatus. Here is to hoping we get some more scoop and teasers at San Diego Comic-Con next month!