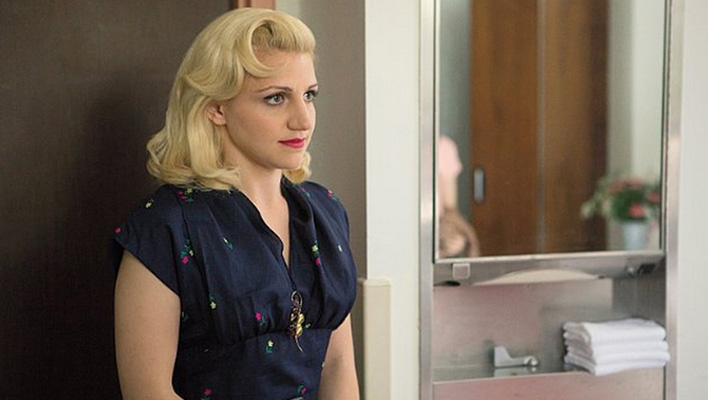 Most Needed Integration: Just when we were thinking that MASTERS OF SEX’s Betty — played by the awesome Annaleigh Ashford — had become completely disconnected from the main story, she landed a job as Masters and Johnson’s secretary!

Scariest Performance: Billy Magnussen was downright terrifying as alter ego Eric went on a killing spree in the finale of the underappreciated WE series THE DIVIDE.

Most Needed Break: The wildly bleak THE LEFTOVERS gave us an episode in which all of the characters were happy — relatively speaking — until the final moments.

Best Match: After being dissed by the various women he asked out on a date, BACHELOR IN PARADISE’s Kalon proved to be both a loser and loner by taking himself out on the town. “Welcome to the first one on none date,” he told cameras.

Most Efficient Use Of Time: When not shooting his literal partner-in-crime or being harangued by the ladies he’d kidnapped, GENERAL HOSPITAL’s Levi found time to dash out to a Supercuts and ditch his long, flowing locks for a stylish new ’do!

Smartest Decision: Viewers voted not to reward BIG BROTHER’s Team America for the lame play they put on as part of a self-created challenge. “We decided to do something very entertaining,” said mastermind Frankie, proving not to understand the meaning of that word.

Best Send-Up: Bob Barker played himself on THE BOLD & THE BEAUTIFUL, recreating the infamous Happy Gilmore scene in which he beat up Adam Sandler. This time, he beat the heck out of Wyatt (Darin Brooks)… which pleased a whole lot of fans ticked at the character for marrying his brother’s almost-wife, Hope!

Slickest Set-Up: Unaware that baddie Nicholas had tampered with her birth control in hopes of getting her pregnant, DALLAS’ Elena bedded John Ross as part of her own plot to unearth a secret. Something tells the biggest question Elena will be facing this season is, “Who’s The Daddy?”

Worst Addition: Remember how happy we were when AMERICA’S NEXT TOP MODEL last week brought back Miss J? We’re exactly that disappointed that Yu Tsai will be the season’s shutterbug. Sorry, dude, but you’re no Nigel Barker.

Most Highly-Anticipated (By Me, Anyway) Return: David Hyde Pierce — best known to many as FRASIER’s fussbudget brother, Niles — will have a recurring role on THE GOOD WIFE this season.

Best Response: After being criticized for literally standing on a pedestal to, as The Wrap put it, “serve as deliberate eye candy for the world as a powerful man speaks” during an Emmy sketch, Sofia Vergara struck back. She declared it was “the opposite” of sexism, adding that, “it means that somebody can be hot and also be funny and make fun of herself.” It’s true, and not only of women. I mean, look at me!

Most Self-Serving: Even in doing something good like the ALS Ice Bucket Challenge, Donald Trump proved himself to be the world’s most narcissistic man by having Miss Universe and Miss USA (“I own it!”) pour Trump water (yes, it really exists) over his head atop the Trump tower. Oh, and then he of course tweeted that his ice bucket challenge was the one that “Trumps them all.”

Most Annoying News: Kim Kardashian is guesting on 2 BROKE GIRLS, because apparently, she is determined to ruin absolutely everything that I love.

Silliest, Most Pointless, Never-Ending Debate: As the week began, Vox ran a story saying that SOPRANOS creator David Chase had finally declared Tony really, most sincerely dead. Chase’s publicists then released a statement saying his words had been “misconstrued,” adding, “To continue to search for this answer is fruitless. The final scene of THE SOPRANOS raises a spiritual question that has no right or wrong answer.” Breaking out our Decoder ring, we translated that statement as: “I will never say Tony Soprano is dead as long as there is a hope that someday, HBO might wanna bring him back.”