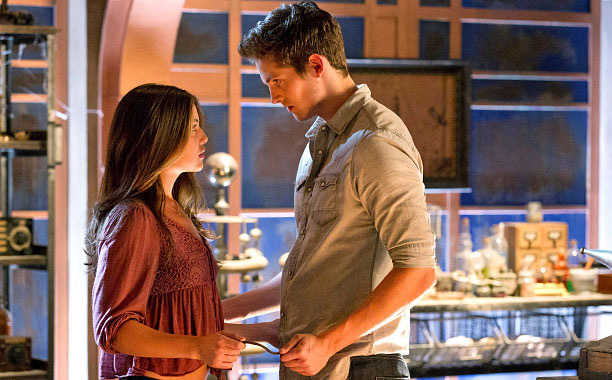 While this week’s episode of THE ORIGINALS was a down tick from last week but that’s to be expected since last week was the best of the season so far. This doesn’t mean that this episode was bad by any means; I enjoyed the hour. Plus there were multiple Mikaelson brother bonding moments which make any episode 100 times better. Let’s dig in!

The episode opens with Klaus and Hayley looking over Elijah as he’s sleeping. Klaus knows that Esther has done something to Elijah and that he’s probably suffering so Klaus wants to wake him immediately. Hayley notices something on Elijah’s neck and Klaus recognizes it as something Esther use to do to them when they were children. He needs a flower to wake Elijah up so Klaus heads to the woods. But before he leaves, he makes Hayley promise to not go after Esther. Hayley promises but says that she will go after everyone Esther loves.

Hayley wants to take out Finn and a plan delevops that involves Cami distracting Finn (because in case you don’t remember, everyone loves Cami). Cami uses her magical powers of getting every man to fall for her to get Finn to ask her out. On their date, Cami pretends to get bit by a werewolf and get taken. Finn presumes to fall for it, thinking the werewolves were unreliable he asks only Aiden to show up to help him rescue Cami. However, Finn didn’t fall for it and throws Aiden through the church doors, Josh runs to his rescue and Finn then snaps Josh’s neck. Hayley tries to fight Finn but he uses his witchy powers to rip out her heart. But Jackson comes out of nowhere and saves Hayley and Cami is able to put these magical shackles on Finn that prevents him wielding magic.

While this is happening, Klaus is searching for the flower and bumps into his dad. Ansel tries to bond with Klaus and it seems like Ansel is breaking through. Ansel says he knows Hope is alive and that he will help Klaus protect her. Klaus can’t take the chance of anyone knowing about Hope so he kills Ansel. Yes, he kills his father and Klaus cried one single tear.

**We interrupt this recap for an ode to the single tear that the men of both The Vampire Diaries and THE ORIGINALS seem to love. Oh, how the Mikaelson and Salvatore men love the single tear cry. We viewers love it as well as it lets us know that these strong and sometimes murderous men are still softies on the inside. They feel but they don’t feel too much which is why one tear is the perfect amount to shed when their feelings overwhelm them. I challenge you TV Addicts to show me one scene where any man on these two shows cried more than one tear in any scene. Now back your regularly scheduled recap.**

After killing Ansel, Klaus returns home to help wake up Elijah. Klaus talks him out of his struggle by saying that he needs him and they are better together. Klaus and Elijah bonding is the best thing about this show. Klaus tells Elijah that he killed his father to protect Hope. Elijah can tell Klaus is hurting and tells him that Klaus did the right thing and that nothing is more important than Hope. Seriously, I can’t handle all the Mikaelson bro bonding! Then Hayley returns with Marcel to tell the brothers that there are two gifts waiting for them downstairs. Those gifts being Finn and Kol.

Did I mention that Klaus left Ansel’s dead body for Esther to find? No, well then I also didn’t mention that she didn’t take it. She went after Cami and appears to have kidnapped her! I. Can’t. Wait. For. Next. Week. Here is the rundown of other developments and my comments:

• There was a whole other plot revolving around Davina and Kol. I just don’t care about it. I love Kaleb/Kol but Davina does nothing for me and her storyline seems pointless.
• Davina lost the white oak stake but it appears that Marcel has it now, could that be leverage to get Cami back?
• Esther wants the stake back to use it against Mikael, btw
• There was also a story around Jackson but it isn’t interesting either. Will he regain his title as Alpha of the wolves? Does anyone care..?
• Best line of the episode: “I thought having a woman’s mouth on my neck would be more erotic.” – Cami says to Hayley
• Second best line: “I think I would have liked being your son.” – Klaus says to Ansel