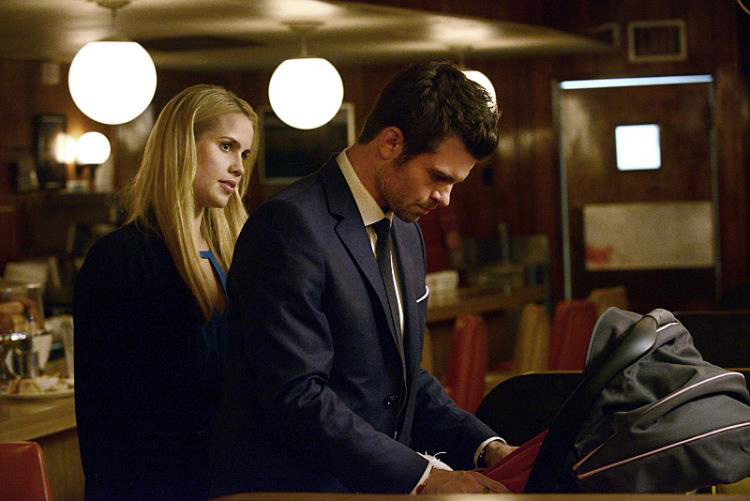 This episode of THE ORIGINALS started in the best way possible with a Rebekah and baby Hope sighting. We also got a great Hayley/Cami bonding moment, Mikaelson sibling drama and Davina be annoying to the nth degree.  Let’s dig in.

Rebekah and Hope are playing in a park when Rebekah notices a crow watching them.  And if that wasn’t creepy enough when she looked back a second time, she saw about 15 crows watching them.  At the same time, Elijah and Klaus are having a family meal with Finn and Kol (who are still in shackles) during which Klaus tries to convince them to join his side.  Finn isn’t very persuadable and tells his brothers that Esther is looking for Rebekah.  The threat to Rebekah and Hope is too much for Elijah and he takes a bite out Finn’s neck.  Rebekah calls Elijah to tell him that Esther has found her.  Klaus says to head west and Elijah will meet her.

Meanwhile, Hayley is still dealing with a depressed and a little intoxicated Jackson.  Hayley wants him to take the wolves back from Esther but Jackson knows that he can’t offer the pack anything better than moonlight rings.  Hayley points out an ancient ceremony that Ansel told Jackson about called Unification.  What is Unification you ask?  Well, its a ceremony where the Alphas of two different packs marry so that the strengths of each pack will be pass along to both packs.  In this case, Hayley would give the gift of being able to decide when she changes.  The only problem being that the Unification requires a declaration of love and a real marriage to take place afterwards.  Later in the episode, Hayley decides to put her pack above her own feelings and promises to marry Jackson.  How will Elijah take this?

Hayley heads off to talk this over with Cami.  After their chat (which was awesome and we need more female bonding between these two ASAP), Hayley discovers weird puncture wounds on Cami’s back.  Um, what did Esther do to Cami?  Finn informs everyone that Esther is preparing Cami’s body to be a vessel, a vessel for Rebekah.

Around this time Finn spills the beans about Dilah to Klaus and explains why their mother attacked Hope.  This is when we get to the most important thing that happened in this episode, Elijah holding baby Hope.  Elijah holding a baby will melt any heart, what won’t melt your heart is the fact that Elijah killed everyone that was in the diner where he was meeting Rebekah.  Rebekah knew this was very un-Elijah like so she snaps his neck.  She calls Klaus and tells him something is wrong with Elijah.  Klaus obviously doesn’t take the news that Esther has done something to Elijah or the potential threat to Hope.  He puts Finn a box (with air holes) for punishment for using Cami and leaves Kol (who has decided to join Team Klaus) in the hands of Marcel because Marcel, Davina, Kol and Cami are to come up with a plan to end Esther.

The episode ends on this exchange between Hayley and Klaus, which was just fantastic: “Where are we going?” – Hayley “To see our daughter.” – Klaus.  And now for the rundown:

• Once again there was a B plot involving Davina which was her going after Klaus.  I really hope the writers can move on from this nutty vendetta Davina has against Klaus because it is pointless and nothing will ever come of it.  This show is not going to kill off Klaus so can we just stop already!
• Josh and Aiden had their first on screen kiss!
• Anyone else get the feeling that if the wedding between Jackson and Hayley happens, Jackson isn’t going to be alive very long after that
• The anticipation of Hayley seeing Hope again is killing me