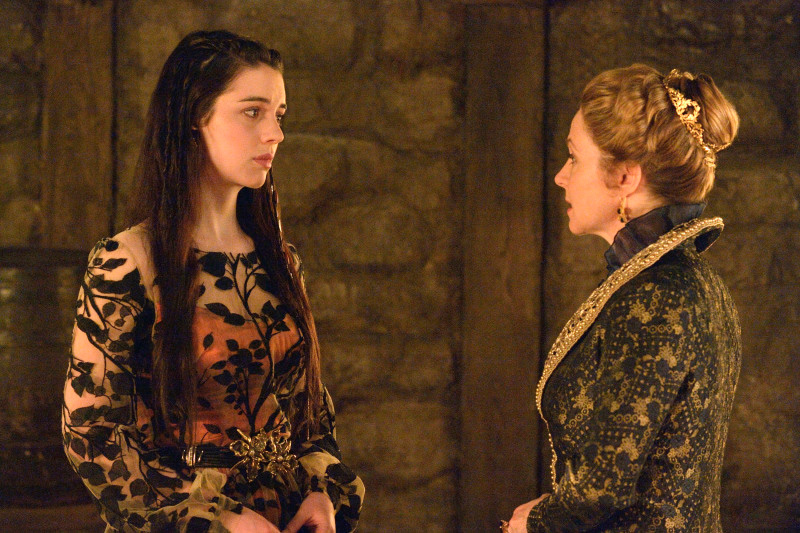 A storyline involving rape will always bring attention and for whatever reason causes controversy. Rape is obviously a topic that people don’t want to talk about or witness on a TV show (unless that show is Law and Order: SVU). Yet, this thinking makes no sense because rape, like all crimes, happens in real life. So why when a plot on Reign leaked that Mary the Queen of Scots was going to be raped, did fans go crazy and start a petition to stop the story? Was it the fear that the story wouldn’t be handled properly or was it that fans didn’t want a character they liked to suffer through this act or did they think it was just another plot device?

If its the first thought, I think we can all agree that the story (so far) has been handled perfectly and as an avid tv watcher, one of the best shows to deal with the immediate aftermath. The entire scene that lead up to the rape wasn’t cheap, it was just honest. A group of men storm the castle looking to kill the king and all they find is his wife alone. Rape will always be a crime of power and these men wanted to prove that they held power over Mary and Francis. Rape has been used during war times as far back as anyone can remember so it shouldn’t be a shock that in a time of panic during this show (which is loosely based on history) would use rape as a way for the Protestants to show their power to the King of France.

Everything that lead up to the rape was handled great as well as the filming of the rape itself and the interaction between Mary and Katherine after the rape. Adelaide Kane and Megan Follows were so emotionally invested in their scene together that it was almost uncomfortable to watch. The fact that Mary had to walk out in front of her people and still be a strong face of a country proves that its not just the act of rape that is difficult for a woman but it is also everything after. Women must live with it everyday and women must find the strength to not let a complete act of violence break them. Kane as Mary stood strong in front of her people but when she was back in the privacy of her quarters, she was able to let go and allow the sadness and weakness and everything else she felt about herself go. I love that she told Francis the truth and didn’t attempt to hide it from him because now we are able to see how this crime also affects the loved ones of rape victims and how they feel just as helpless.

The scene and story appear to be handled with the respect that it should, so could it be that the fans just didn’t want a character they loved to have to go through this. While that is sweet and innocent but its not realty. Rape and other violent acts happen to friends and loved ones all the time. The fact that this point shouldn’t be the reason for not wanting the plot, could it be the fans didn’t want rape to just be a plot device? I agree completely that something like rape should never be used as a plot device or a cheap way to get viewers but traumatic things like this are used for plot devices all the time. No one creates a petition when a character is murdered off or when some other horrible thing happens on a television show they love.

Experiences like rape shouldn’t be something the television community should run away from because fans don’t want a character to go through it or that it’s too horrible to happen to a character. Horrible things happen everyday and those horrible things should be allowed to happen on our favorite television shows. I for one am so pleased with Reign and the fact that Mary told people and didn’t try to hide it and is dealing with it out in the open even though it will be one the most difficult situations she will go through as a woman. We need stories like this on television because women need to know that it isn’t their fault they were raped, that they should tell people they were raped and men need to know that they will be punished for such a crime. I’m excited to see how this changes Mary and Francis and how this will impact their relationship. We should all be applauding Reign for sticking to their guns and portraying a very hard subject in a great way. I can’t wait for the next episode and I hope all Reign fans can say the same thing.