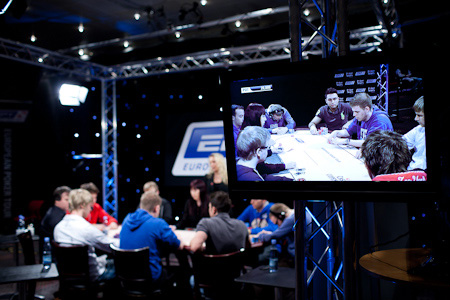 Poker first hit the airwaves back in the seventies when American TV station CBS created a one hour highlights show of the World Series of Poker (WSOP). Although the early broadcasts were a million miles from the visual spectacles of today, the action was enough to captivate a national audience.

In fact, what the WSOP highlights lacked in critical poker analysis, they made up for in colour and excitement. In a time  when Doyle Brunson, Puggy Pearson and Amarillo Slim were dominating the game, the external antics were as entertaining as the action at the felt.

Since those pioneering days back in the seventies, poker on TV has evolved massively to the point where feature shows on major TV stations are now common. However, how did we get from simple highlight shows to the full-blown extravaganzas we see today?

To form some sort of answers, let’s run through a brief timeline of poker on TV.

The 1980s
It was a case of “as you were” in the 80s as poker on TV remained largely the same. CBS continued to air their regular WSOP shows but without hole cards exposed for the viewer. One change that did occur was the programme’s switch from CBS to  ESPN. However, overall, what was started in the 70s continued through the 80s until a shift in the nineties.

The 1990s
The birth of modern poker viewing took place in the nineties, most notably when WSOP bracelet winner  Henry Orenstein  patented the first hole card cams. The under table cameras were first used in the British poker show Late Night Poker, and allowed viewers to see each player’s cards.

This innovation allowed the audience greater access to the game and caused a shift from casual commentary to more critical analysis of the game. A greater insight into the game allowed a proliferation of personalities to emerge based on their style of play.

The 2000s
After Orenstein laid the foundations for a new era of TV poker, Steve Lipscomb, along with Mike Sexton and Linda Johnson, created the first televised poker tour: the World Poker Tour.

Hole card cams now came into their element thanks to the Hollywood production quality of the shows. Indeed, each episode came complete with a TV set, commentary by Mike Sexton and Vince van Patten and life changing amounts of money. This shift from a  cult show on UK television  to a mainstream spectacle helped accelerate poker’s popularity like few other things.

Following the boom of the WPT, the WSOP also invested more money into the production of its shows, gradually adding coverage of more and more events. Eventually, more poker operators began to see the value of TV shows and that brings us to today’s best shows.

Today’s TV climate is one of high production costs, in-depth analysis and immediate data. Live online streams by the likes of the European Poker Tour now give instant access to the best poker tournaments. Complementing these shows are specially produced “made for TV” tournaments  such as PokerStars’ Shark Cage.

Offering a top prize of $1 million and some interesting rules, these tournaments are crafted with TV audiences in mind. That means a number of twists and turns, including an audition phase for potential players, a time limit (30 seconds) on the action and a bluff penalty which forces a player to go to the shark cage if they’re duped on the river.

If you look back at where poker on TV started and where it is today with show’s like Shark Cage, you’ll see some major progressions. From grainy highlights to full HD features complete with interactive elements and expert commentary, poker on TV is now a highly evolved commodity.