Podcasts are all the rage these days, and they’ve gotten particularly good for obsessive TV junkies. As everyone else is busy compiling their year-end best of lists, we thought it’d be a good time to reflect on the best podcasts available for the ultimate TV aficionado. The following list is in no particular order. 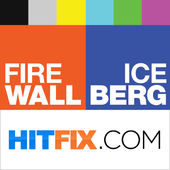 FIREWALL & ICEBERG PODCAST
HitFix’s Alan Sepinwall practically invented the episodic review, so it should come as no surprise that he, alongside HitFix’s Daniel Feinberg, have set the bar for what a weekly TV podcast should be. Each week, they discuss a wide range of TV-related topics, providing commentary on TV news, and reviewing the latest and greatest in television. On slower weeks, they fill the time by digging into the listener mailbag, and checking in on veteran shows. Their camaraderie lends itself to delightful banter throughout.

If you’re looking for the perfect drinking game, take a shot whenever Sepinwall yells “HIEROGLYPH!” (iTunes) 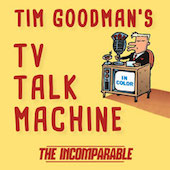 THE TV TALK MACHINE
Hosted by Jason Snell and The Hollywood Reporter’s Tim Goodman, this new-ish podcast doesn’t hold back. It’s a tad more industry focused than Firewall & Iceberg, and feels a bit looser. In its first 13 episodes, the guys have established their own unique language, with such inventive terminology as “sub-web” to allude to television content created for the web, “Gracepointed” for when a perfectly good British show gets an unnecessary U.S. remake, and “Asscension,” for describing the lower-body nudity in basic cable drab. New episodes drop every Friday, and it’s the perfect companion for your end of the week commute.

Ryan from the 7-1-8 gives this one his full endorsement. (iTunes) 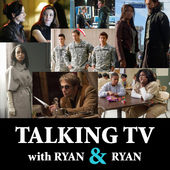 TALKING TV WITH RYAN & RYAN
The Huffington Post’s Maureen Ryan and ScreenCrush columnist Ryan McGee don’t have a set schedule for releasing new episodes of their podcast, but when they do, it’s always a treat. They focus in on shows they really care about and want their listeners to be watching. When they dislike a show (I’m looking at you, “Gotham”), the commentary lends itself to some gut-bustingly funny banter, and is always right to the point. (iTunes) 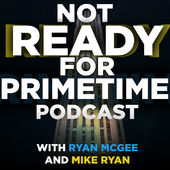 NOT READY FOR PRIMETIME PODCAST
This is the second podcast featuring Ryan McGee to make this list, and for good reason. His weekly chat with fellow ScreenCrush writer, Mike Ryan, breaks down the latest “Saturday Night Live” episode sketch-by-sketch to distinguish between the good, the bad, and the ugly. This is the perfect podcast to close out the weekend, or a great one to dial up on your Monday morning commute. (iTunes) 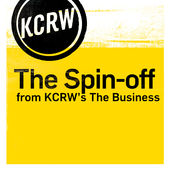