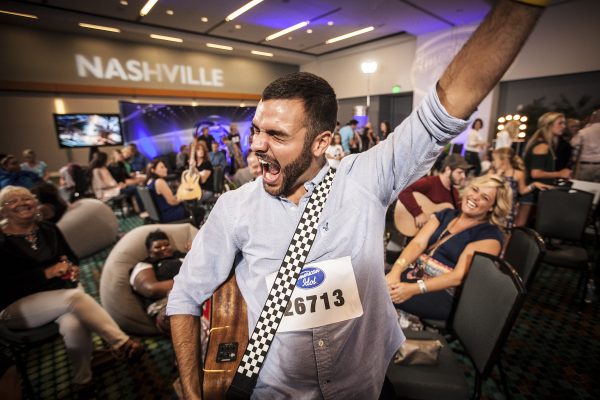 The positivity parade continued on last night’s ‘American Idol’, and I, for one, couldn’t be any more disappointed.

Not a one. Not a single auditioner to whom they gave the full-fledged audition package was what you’d consider “traditionally bad”. Only one, a girl named Jasmine toward the end of the show, actually didn’t get passed through to Hollywood. She wasn’t even all that bad.

There was some bad though. And by bad, it was more like below average, not the super-fun mockable performances of yesteryear. Pour some liquor on the curb for the girl who sounded like the cowardly lion, the like a virgin kid and the Chicken man from ‘X-Factor’.

Still, we’ll do the best (or worst) with what we have. Plus, there was some actual good stuff too!

The Three Worst Auditions
Andrew
This is the guy who led off the show with an energetic and insane personality that seemed ready for a ‘Mic’d Up’ section on NFL Films. He was basically doing an impression of a good singer. First he shouted, then he sang like a singer and then was given a second chance which he absolutely did not capitalize on as he sounded like he was singing a lullaby to Satan’s spawn. And by singing like a singer, I mean he sounded like what a good singer should sound like, without actually having a good voice – that type of person who knows how singers sing and tries to imitate it, but can’t do it himself.

I swear to God that makes sense. Just think about it.

Gina
This was the girl who went all one-man-band right down to wearing a 1940s chauffeur hat to top everything off. She had a cobbled together bass drum and a hand shaker as her accompaniment and actually managed to put together some decent rhythm from her humble instruments.

Despite this, she was unable to complete the musical puzzle with what is probably an essential on this show – a singing voice. She went bad busker with a flat tone that couldn’t find its pitch with a musical GPS and actually managed to get overwhelmed by a bunch of beans inside a plastic cup. There was really nothing interesting about her besides her makeshift instruments. Least of which in her voice.

Zack
This was the guy who made it a big point of the fact that he went to the same high school as David Cook and not enough of the fact that he looked like a part Tilda Swinton would play in a horror movie. He started off his audition pretty poorly by insisting the pianist play his note – as though the musical director of ‘American Idol’ wouldn’t know how to match his pitch.

He just got worse from there as he started the actual singing portion of his audition screaming like a banshee on helium until devolving into essentially no voice whatsoever, becoming as plane and forgettable as a guy with a fire-red high-top fade could be.

To be fair, that’s actually something of an accomplishment.

The Four Best Auditions
Garrett
This was the blind cowboy, which is incidentally the title of my favorite Gene Wilder Western parody film. Garrett is a true old-fashioned country/western artist. There’s a complete authenticity to the way he delivers his performance that sounds nothing like the typical attempted country we see on this show and so far off from the new wave of country that it’s actually refreshing in how much it’s like something we’ve seen a bunch of times before.

He also showed some solid range in singing a J-Lo song like a total Spanish Outlaw. I think this kid has real chops and is as much a finished product as you’ll normally see in the initial audition phase.

Hector
This was the master cosmetologist who, in case you didn’t know, according to Hector means that he’s, “The BOMB!” Just an FYI.

He sang one of my least favorite songs of all time (“Too Close” by Alex Clare) and actually made me kind of dig it. He sang it with a very smooth and effortless flow that was completely pure and very soulful despite how much he stripped the song to its bare bones.

I like a guy who can totally rework a lame song and make it into something I actually want to hear – that shows some true talent.

Savion
This was the guy who auditioned last year with braces and came back this year sans braces. Apparently that made all the difference because, well, you know, no braces.
His orthodontist better get a good accountant, because he’s about to print money if this did have any real effect on Savion – he turned the kid into a superstar. Savion’s already a total soul artist who’s heavy on the authenticity and light on the pretense – he’s just all the way there. Plus, the kid can actually play a pretty mean acoustic guitar.

He could be Joshua Ledet with a guitar. That notion should frighten everybody else in this competition.

Jess
This was the girl who closed the show.

No words required for her. Just watch the clip and prepare to be astonished at the fact she isn’t already famous.