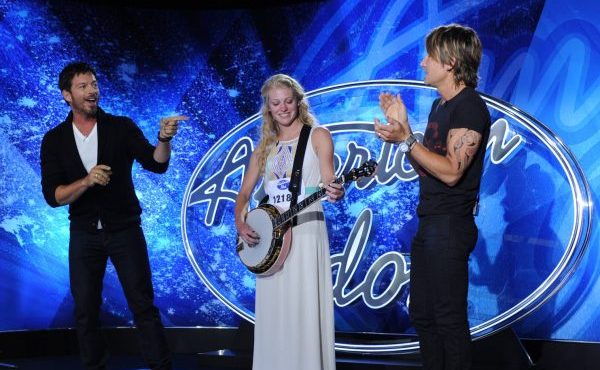 By now, you know the drill, ‘Idol’ has decided to become ‘The Voice’.

Despite its judges’ constant denigration of the NBC hit whenever they do press, it’s clear it’s the show they want to be. True judgment and actual auditions are being eschewed in favor of forced judge chemistry and an “everybody wins” mentality.

Get out your participation ribbons, America – that seems to be what they want to give out on this show this year.

The Three Best Auditions
Big Ron
This was the guy who looked like he should be playing left tackle for the Chiefs rather than auditioning for ‘American Idol’ and christened himself Big Sexy sooner than you could utter the phrase cliché nickname.

He sang what some may consider an extraordinarily creepy version of “Let’s Get It On” wherein he managed to change the song to be entirely about Jennifer Lopez. You could just picture him practicing that in his mirror for weeks like the guy on the preview for that HBO show “The Jinx”.

Clichés and stalker tendencies aside, Big Ron did manage to bring it quite nicely in his audition. He showcased an effortlessly smooth soul flow that seemed a contrast to his overwhelming energy. He’s a very nice singer, and a very entertaining guy. Emphasis on the second part.

Stephanie
This was the girl in the royal blue dress who sang an original song. She came off like a combination of Ingrid Michaelson and a country crooner. The song could certainly be on the radio. It had the easy melodies of a solid Sara Bareilles song and she delivered it like a pro who’s already sold out theaters with it. Her voice isn’t perfect, but there’s an authenticity there that trumps outrageous tone. She just seems like a true and honest singer/songwriter.
Crazily, Harry told her no. Maybe he’s jealous of her hit record.

She, of course, came equipped with a pink banjo, and man could she play the hell out of it. Like a blind old country singer sitting on a rocking chair in a small town without a single traffic light. She also had quite a voice. Beyond her 22-years, she sang like a veteran songbird who’s torn up the Adult Contemporary charts for years and years, and even through in some yodeling for good Branson measure.

I don’t know where exactly she appeals in the voting demographic of this show, but I’ll definitely enjoy watching her for as long as they keep her around.

The Two Worst Auditions
Ian
This is the guy who wore a shirt out of Sherman McCoy’s collection and listed his profession as a theater actor. He definitely showed his profession as he went about as far over-the-top as you can in singing a Bee Gees song and that’s really saying something. He might even get kicked out of a summer stock production of ‘Xanadu’ for bringing too much energy.

Despite his abundance of energy, he forgot to bring much in the way of a singing voice as he sounded like he most tone deaf singer in a local burlesque show. Worst was when Harry attempted to have him sing scales and I think the piano asked to be put down rather than have to attempt to match pitch with Ian for one second more. Despite this, I like his future as a performer.

Joey
This was the hipster girl who came complete with the sundress, bowler hat and blue hair. She, naturally, sang a song by The Tallest Man on Earth (this is a solo act, or so my SiriusXMU channel tells me) and played an accordion as her own accompaniment. She also talked a lot about being unique. Again, Joey is a hipster.

And here’s the befuddling thing about her. She has a terrific voice. She sounds like a 50-year-old soul singer ready to rip a blues record apart. Sadly, she undermined this by having absolutely no rhythm and struggling to poorly play her squeeze box at the same time that she sang.

Harry made a great point when he said that she was almost a novelty. I’d put her past almost and that’s why she’s in the worst, rather than best, category.