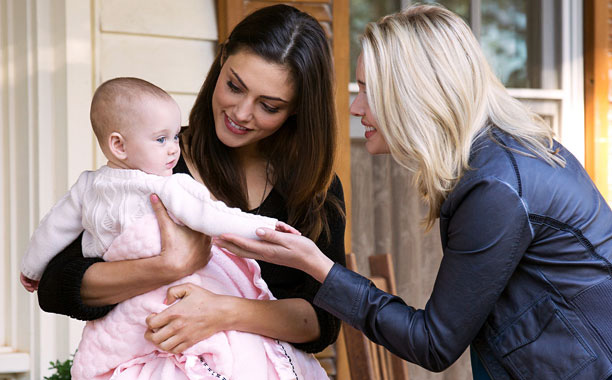 THE ORIGINALS is back!  While I wasn’t completely blown away by this episode as a whole, there were some fantastic moments and that ending, wow that ending.  How The Originals writers continue to blindside the audience I will never understand.  I’ve read numerous interviews with the cast and producers during the hiatus and everyone was asked about Dahlia, who everyone thought would be the big bad the second half of the season.  And while Dahlia may still be the one to watch out for, she was not the one we were introduced to, that would be Freya!

Let’s get into the other developments, shall we?  The episode begins with Klaus bringing Cami to the Mikaelson safe house and then introducing her to baby Hope.  You might remember Cami thinks Hope is dead and Klaus was quick to tell Cami that he will compel her to forget Hope for Hope’s safety once it is safe for her to return home.  Klaus then returns to the Quarter leaving Elijah behind with Cami so that he can watch Hope but more importantly so he can work through whatever the hell is going on with him.

In case you forgot (like I did) Mikael freed Finn from being placed in a coffin by Klaus.  Finn is determined to figure out where Esther is and when Klaus returns home, Finn is there is to demand Klaus tell him where Esther is.  Klaus of course says no and Finn doesn’t take it well.  While leaving the compound, he casts a little spell that prevents anyone from leaving or entering.  If you’re wondering why this matters, it’s because Hayley and Marcel planned a meeting of the werewolves and vampires at that exact same time.  Meaning the wolves and vamps are trapped together.  Finn then makes matters worse by magically making the vampires very hungry for blood.  Finn is able to use this much magical power because he is channeling Mikael for strength.

Klaus calls Finn to remove the spell but Finn demands that Klaus first tell him where their mother is.  Klaus does but he can’t wait for Finn to lift the spell so he enlist Kol and Davina to power down the spell for 60 seconds allowing the wolves to leave.  The vamps can’t leave because Kol’s spell removes all magic including daylight rings from the surrounding area.  After, the wolves leave, Kol starts to leave as well but Klaus throws him back in with the vamps.  Why you ask? Because Klaus found out that Kol put Rebekah in a different body then he was suppose to.  Davina convinces Marcel to let Kol run and hide from the vamps which just really annoys me but I’ll get to that in the rundown.

Speaking of Rebekah, she is the body of a witch trapped in the house from the midseason finale.  She wants to get word out to her brothers so they know where she is and enlists Cassie for help her.  Cassie was the original Esther vessel, the harvest girl.  While trying to perform a spell using letters, the letters move on their own.  Then some blonde, ghost witch appears.  Rebekah follows her to a coffin with said ghost witch in it.  Who is in the coffin, we’ll get to that in a minute.

Meanwhile, Hayley is feeling guilty about sleeping with Elijah and tells Jackson about it.  At first, he doesn’t take it well but then he tells Hayley that he appreciates her honesty and that he is in love with her.  He then makes a very beautiful speech that ends with him asking Hayley to marry him which she accepts.

Ok, so the blonde, ghost witch girl .. well it’s Freya.  You probably guessed that based on my opening paragraph, right?  Anyways, more Mikaelson siblings is always a good thing in my book but will Freya be on Team Klaus or Team Finn?  Oh, one last thing, Esther became a vampire!  Also, Finn didn’t take that very well either and paralyzed Esther just like he did Mikael.  Looks like Finn is going to be one powerful witch.

Now for the Rundown:
• Hayley and Elijah are sufficiently awkward with one another after their night together
• Jackson’s speech was so loving and all he got was a hand on the cheek?!? Come on Hayley, he deserved a kiss
• I loved that Jackson asked Hayley the question we all want her to admit: Is she in love with Elijah?  And by her silence it’s safe to say that she is but why won’t she just say it out loud?
• Marcel promises that the vamps will side with the wolves if they promise to help eliminate the witch problem
• I love the scenes we got between Cami and Elijah.  Cami could always hold her own against Mikaelson boys
• Klaus saying that the strongest foundations are built on the decency of the merciful lies makes me sad because that is kind of true but also Klaus has a horrible outlook on life
• Witch/Human Rebekah’s reaction to tasting blood was perfection.  Also even human Rebekah can kick some ass
• Marcel letting Kol run away from the hungry vamps really really made me mad.  First, Marcel needs to stop listening to Davina (I think we all know how I feel about her) and second, doesn’t Marcel love Rebekah?  He should be just as upset at Kol as Klaus if not more