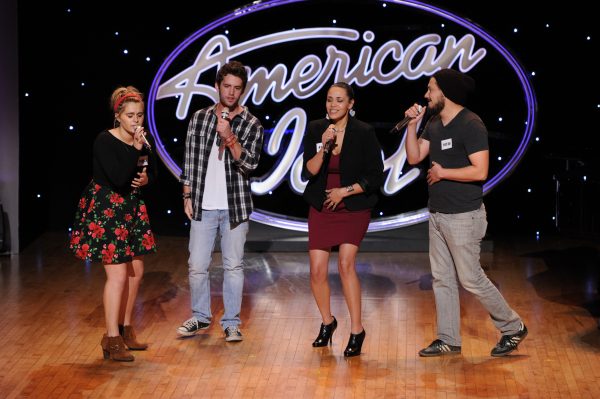 The brilliant glorious wreck that is the group round of Hollywood Week came to an end last night with no shortage of awkwardness, in-fighting and strange illnesses. But what were the best parts? Check out round two of our Hollywood Week Awards:

“Lost in Space” Award
Back in the day, long before Matt LeBlanc attempted to be a sci-fi action movie hero, “Lost in Space” was known for ending its episodes on a cliffhanger and then starting the next week to show an anti-climactic resolution to that situation. This week, ‘Idol’ did the same with Alexis’ panic attack. Guess what? She was fine and started singing immediately! Who saw that coming as she suffered from nothing that was caused by nothing? She got through despite an inability to sing. At least there may be some more panic attacks in our future.

“Don’t Let the Door Hit You on the Way Out” Award
Sal, the most detestable contestant in years finally went home after bombing his group session. He didn’t leave without one last chauvinistic shot, however, as he asked J-Lo about dinner again on his way out and then took credit for taking Alexis in as though he should be treated as a hero for shepherding her through to the next round. I’m not going to miss that Sinatra wannabe at all.

Best Accessory
Emily Brooke, suffering from food poisoning (an actual problem), rejoined her group for rehearsals with a bit of reassurance, saying, “If I throw up, I have a bag.”

“Ready for WWE” Award
This goes to the guy with the ridiculous One Direction haircut who cut a brilliant shoot promo on his way out the door. Basically saying that he was a solo artist and not part of a group and he doesn’t need people that he’s never going to see again holding him back from being a star. That’s solid stuff. I can’t wait for the rematch this Tuesday in Texas.

Most Confusing Group Name
LKYCO, a group consisting of a bunch of mid-pubescent boys took this odd name that sounds a bit like an outdated search engine. In actuality, it stands for Ladies Keep Your Clothes On. It’s unclear what exactly their endgame is with that statement. Are they assuming that ladies will love them so much that they actually have to insist they remain clothed? I imagine that they’re actually so intimidated by the prospect of sexual congress with a woman that they’d beg a lady to keep her clothes on lest they end up crying in a post-coital corner.

Adding to the confusion – nobody in the group could remember the name.

Captan Bligh Award
“Hollywood” Anderson didn’t make much of his namesake week as he spent his time as team captain of Team No Sleep hitting on various women, sleeping through rehearsal and ultimately causing a full-scale mutiny among his team. He managed to get through though and left a surprisingly optimistic and respectful group of cast-offs behind.

“No Pressure” Award
Rocky Peter essentially told his team not to screw up because he’s homeless and needed to do well so he won’t keep being homeless. Not really a pep talk that makes people feel relaxed and ready as they prepare for their performance. Surprise, surprise only one of the four contestants made it through and it wasn’t Rocky.

Progressively Worse Award
Mark Andrew, who seems like a contender in this competition, sang the Joe Cocker version of “With a Little Help from My Friends” with his group in one of the strangest starts to a performance we’ve ever seen in this round. After Andrew completely slayed his vocal, each successive group member picked up where he left off and sounded increasingly worse until the final contestant hit the “sang out of tune” portion and…sang out of tune. Not exactly Mount Rushmore.

Best Lyric of the Night
If I can quote Joey Cook singing Queen’s “Somebody to Love” – “I totally didn’t mess up those words. It’s just your imagination.” Girl can sing too. I look forward to her next song parody.

That’s it for the groups. Check back tomorrow when we break down the start of solo performances.