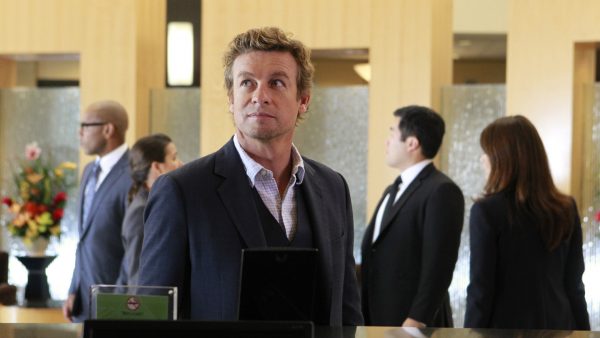 We’re down to the wire, folks. Here are your MENTALIST Top Five Moments!

The Case!
Two young lovebirds are shot dead in their car for being in a lover’s lane at the wrong time. Cho, who I’m relieved did not up and quit after last week, tells Lisbon they can use Jane’s special brand of intuition. Lisbon looks like she wants to throw up but puts on a smile and says she’ll do it. Oblivious Cho remains what must be intentionally oblivious. Jane, meanwhile, is enjoying the Grand Canyon in his airstream and ignores Lisbon’s call. Yikes!

The kids were each missing a fingernail. Ew. Abbott tells Lisbon he knows she and Jane are trying to work it out, but he says the case is getting headlines, and they need Jane’s noggin. Lisbon swears she’s working on it. And by that she means she put a warrant out for his arrest for “failing to appear.” At least Jane appreciates the pun.

A park ranger tells Cho of a couple of brothers who have a shack outside of the park where the kids were found, and I think Cho’s having Vega-related PTSD, because he’s especially rough with one of them. They turn out to be a dead-end.

Abbott later calls him on it after the ranger tattles on Cho. He admits to the aggression because he was caught by surprise and says it won’t happen again. Though he does get his back up when Abbott suggests he see the counselor he saw after he left Special Forces. Cho says he’ll think about it but not in a way you believe it.

However, he does genuinely thank Abbott.

The Psychic!
A woman named Ree walks in with her shy brother, Gabriel, who she claims is a psychic. He immediately sets off Wylie when he says he can hear Wylie crying inside and says he’s sorry. Then he freaks out Lisbon and Abbott by first saying Abbott is leaving then saying the murderer wanted to take the kids with him but couldn’t, so he took their “fingertips” which is close enough.

Things get a little sketchy from here. He says he talked with a creepy dude six months previous but cannot give any kind of description, since he only sees a person’s insides.

Jane Returns!
And ooooh…it’s a frosty reunion. Lisbon was sure he was dead, while Jane was sure she’d know he would return. She wants to know what she can do. He says he can’t just soldier on like she does and needs space and time to think. Lisbon agrees as long as he doesn’t ignore her phone calls. It’s a deal. Abbott is glad Jane is back, but he insists he’s just “stopping by.”

You know Jane can’t pass up meeting a “real” psychic. Gabriel pegs Jane as a fraud who will mock him, so ya gotta hand him that. Then he says Jane’s problems will be cured by the number three. Jane tells Abbott that Gabriel is a smart manipulator or an insane killer and says to keep an eye on him.

Jane goes to a tavern and gets trashed while the owner flirts shamelessly with him. He wins three free games of pinball, and they talk about how the number three is important to everyone. Also, Lisbon calls, but he doesn’t see or hear his phone. So much for the deal. Tavern lady takes Jane’s keys and tells him to sleep it off, but he’d rather walk it off. He falls asleep in some kind of field and when he wakes up, hilariously the first thing he sees is a three-legged dog. He follows it and spots land for sale with a cute little cabin next to a lake. A look of calmness overtakes him, and it’s stressed even more when Jane changes his tune. He tells Abbott he’s back.

Wylie and Cho, Partners!
To my surprise, when Wylie asks if he can partner up with Cho, he agrees. I would have thought he’d be gun-shy taking someone who’s even more naïve than Vega, out in the field. They spend the entire night outside of Gabriel’s house with nothing going on except that we find out Cho reads Dostoyevsky. Cho says he’ll show Wylie the ropes but admonishes that he should be going out in the field not because he misses Vega but because he wants to. Wylie says he’s tired of being in the office when Cho could use him and says he’s ready. Cho seems satisfied.

A girl stops by to talk to Gabriel. When she leaves, Cho stops to talk with her, but she basically just went to Gabriel for a psychic reading about her love life. She says she doesn’t believe in psychics but believes in Gabriel. Gabriel checks his mail and waves to Wylie. But seriously, they’re in broad daylight within eyeshot of the house. And Wylie didn’t even duck down.

Then Gabriel collapses, and when Wylie gets there to help him, Gabriel is convulsing on the ground holding his stomach where Vega was shot. He tells Wylie Vega is okay and not to worry about her. Then he mentions white bones wrapped in red clay. Turns out, there’s a red clay deposit not far from where the bodies were found. Though Lisbon is all “He’s not a psychic,” Wylie convinces her to check it out. They find multiple bodies. It’s a serial killer.

They take Gabriel in. Jane can’t break him, and when they try to hold him over, Ree comes there with a fancy lawyer and gets him out. The press is there, and Gabriel goes and paints a humongous red target on his back when he talks about how the killer will continue to kill, because he can’t help it.

Cho and Wylie stake out Gabriel again, Cho runs to check on a shadowy figure. It’s the love advice girl. She saw Cho and thought maybe he was coming for Gabriel. MEANWHILE, Wylie, who was told to stay put, immediately got out of the car and gets bonked on the head as a reward. He comes to, and they go inside Gabriel’s house to find Ree dead.

Afterward, Wylie gets cold feet and wants to quit the field work, but when Cho hits him with sitting at his desk answering phones, Wylie reinforces his back bone. He talks with Jane, who does his usual hypno trick, and Wylie remembers the person smelled like his uncle’s old fishing shack which didn’t smell so much like fish but old, spilled beer. As luck would have it, there’s a shutdown brewery less than a mile from where the bodies were found.

Poor Gabriel
Who’s unlucky is Gabriel. He’s hanging there all shot, banged up, and bloody with the word “fake” carved into his arm.

So, it seems we’ve come full circle! Here’s a young psychic who talks about a killer on TV and gets killed. At least there wasn’t a happy face next to this one.

As you’ve guessed, this is a two-parter series finale next week. I may get a little emotional, so try to bear with me.