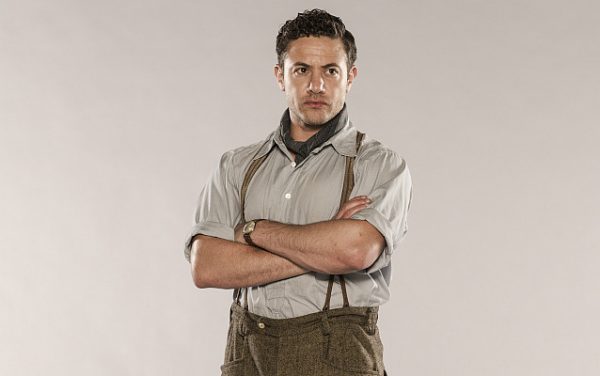 If you’re a British television fanatic, you may recognize Warrington-born actor Warren Brown as DS Justin Ripley on LUTHER, as Andy Holt on HOLLYOAKS or as Donny Maguire on SHAMELESS. But with CBC’s new World War II-set spy series X COMPANY (created by FLASHPOINT’s Mark Ellis and Stephanie Morgenstern) now airing, Canadian audiences will be introduced to Brown as Neil Mackay.

As a former Thai boxer, Brown gets to bring his own trained physicality to his role as Mackay, a working-class English cop who worked in Shanghai, where he earned a black belt and kept the peace among rioting gangs. However, when the war breaks out, Mackay’s family is killed in the Blitz — a period between 1940 to 1941 when the Germans invaded London — leaving him with only one thing on his mind: revenge.

Mackay gets that opportunity when he is recruited by Duncan Sinclair (Hugh Dillon), a Canadian military man who runs Camp X, which is based on the real-life top-secret training camp of the same name that was located near Lake Ontario and run by the Allies to train British, American and Canadian spies.

Among his fellow recruits are ordinary civilians — Aurora Luft (Evelyne Brochu), Alfred Graves (Jack Laskey), Tom Cummings (Dustin Milligan), and Harry James (Connor Price) — who each may not have his authoritative experience to call upon but have special skills that prove to be invaluable to the cause.

As seen on the Wednesday Feb. 18 pilot episode, Mackay’s motivation was put to the ultimate test when he found himself in a precarious situation where lives, which potentially included his own, were at the fate of a decision he had to make. He either had to risk losing his own life to save another or stay faithful to the mission at the cost of innocent lives. He chose the former.

If the pilot episode was any indication, Mackay’s chilling move will be far from his last. I had the opportunity to interview Brown last month to talk about his role on the new series. Check it out below!

First of all, I wanted to say congrats on the show. I found it really interesting.
WARREN: Thank you very much.

I had no idea about the British, American and Canadian involvement [in the secret agent world of World War II]. Were you aware of that prior to the show, or was that what attracted you to it?
WARREN: Admittedly, no. It was something I knew nothing of, if I’m honest, until I read this. But again, I found it really interesting that there was this kind of facility in Canada that played a massive, integral part to winning the World War. I suppose, in a good way, the fact that it was an ultra-secret facility and not a lot of people knew about it, that’s kind of the plan. Cause if everyone knew about Camp X and it wasn’t so secret… But yeah, it played a huge part. That coming together of British, American — that whole place, and this was the centre for it that started off the birth of espionage as we know it today.

Since it was so secretive, I’m assuming you didn’t get any actual cases you could study about it.
WARREN: No. We did a lot of research. There’s kind of a lot of books, and some of the things that may have inspired it, but obviously ours is kind of made up events. But to an extent, these things did happen. These men and women, they risked their lives, and did go behind enemy lines for the greater good to help us win the war. So, you know, huge, huge risk. Not a lot of people knew about them. But also had they not done this particular job, the world could be a very different place than it is today.

More than any other war, I think this war between 1939 and 1945 is really popular in films and television shows. Why do you think it resonates so much, even to 2015 audiences?
WARREN: Obviously it was a huge thing. Millions of millions of people died. Both world wars are kind of, as you say, very heavily documented. We kind of know of it and seen it in very different incarnations both on television and film. I think we’ve got an original take. Although it is period, although it is set in that time, it does have a real modern edge to it. That clash of period and the now of it is still relevant. It really works.

Your character [Neil Mackay] is described by [Duncan] Sinclair in the episode as hating Germans — he’s this “ex-copper.” Is that an ex-cop?
WARREN: Policeman, yeah.

His family was killed in the Blitz. Also, in the episode, we seem him risking his life for this little girl named Annie. Based on what is said about him and what he does in the episode, I get the impression that he has nothing left, and he is willing to risk his life. Would you consider his motivations as more of a revenge on the Germans or a sense of moral duty?
WARREN: I think having lost his family, he does take it very personally. He’s stated that he hates the Germans. But yeah, he has a strong moral compass. I think they’re all there — some of the things they have to do is quite vicious but ultimately for the greater good. These things had to be done in order to win that war. Saving this girl, he kinda sees things as black and white. If that means risking their lives, I think they’re all prepared to do that. They know that going into this job, they’re picked from very different backgrounds. They all bring different skills and qualities to the team, but ultimately they all want to be there and to serve.

What I like about the show is that every character is not black or white. They’re faced in situations where they have to go against their morals. For instance, your characters had to either destroy that bridge, even if your colleagues were in it, or risk losing the mission altogether. Are we gonna see more of these situations where they face dilemmas that don’t really have a right answer?
Definitely. It’s not quite as simple as what’s right, what’s wrong, we’re the good guys, the Germans are the bad guys… Another thing that I particularly like about this is that even the Germans are not painted as out-and-out evil. You do get to see their humanity. During these wars, men and women from both sides had no option but to fight, whether they believed in the cause or not. National service told you [that] you had to do it. I’ve stumbled off the question. (laughs)

(laughs) For a last question, what do you want audiences to take away from this [show]? What I see it personally as is a tribute to these unsung heroes that we’ve never really heard about.
They were these fictional characters. But there were men and women that risked their lives to win this war. So, yeah, a bit of a tribute to them and the millions of people who died during both of these world wars. But it’s also storytelling, and it’s escapism, and it’s hopefully done in an exciting, action-packed adventure, which I think it is.

Well, thank you so much. It was nice meeting you.
Thanks. Cheers. You too!

Alfonso Espina is a Toronto-based freelance writer and Ryerson University graduate whose writing can be found on sites like The Huffington Post, Up and Comers and Screen Invasion. If you need someone to talk to you endlessly about films, television and books, you can also find him on Twitter @alfonsoespina.