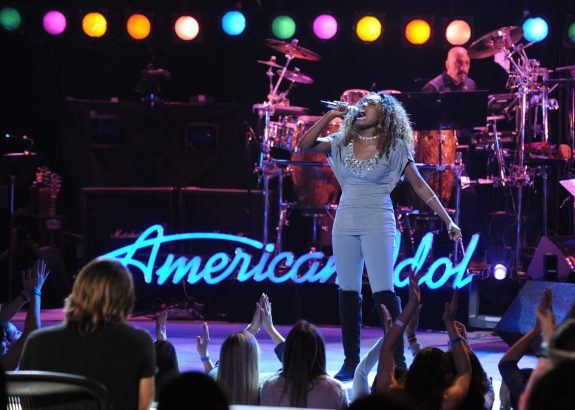 Last night was the girls’ turn with the ‘Idol’ speed round. Who was up to the task? Read on to find out.

Lovey James Sang “Love Runs Out” by One Republic
Keith Said: It got better and better as the song went on.
J-Lo Said: That was awesome.
Harry Said: I thought you did a really strong job.
The Verdict:
Lovey straight can’t sing. She was flat the entire time on this performance and never felt in the moment. Too much effort displayed just to look like she was actually present.
As the song went on, she did come alive a little bit, but her voice certainly never got to where it needed to be.
Grade: D+

Adanna Duru Sang “Rather Be” by Clean Bandit feat. Jess Glynne
Keith Said: You showed so much of your capabilities.
J-Lo Said: You have so much talent.
Harry Said: That was the best I ever heard you sing. You dangerous.
The Verdict:
Adanna took a fun little pop number and turned into an old-school diva torch song. This isn’t the type of song that seems like it can be slowed down the way she did it, but Adanna really made it work with a towering command of the stage and complete control of her vocal.
From its ballad beginnings, she took it full bore into a searing rock ballad to close the performance. She was close to giving a complete performance in a space of only 90 seconds. That’s really impressive.
Grade: A-

Alexis Gomez Sang “Gunpowder & Lead” by Miranda Lambert
Keith Said: You didn’t look comfortable playing the guitar.
J-Lo Said: I loved it. I love you.
Harry Said: It sounded like you were imitating the record.
The Verdict:
Alexis looks like a Portland hippie, sings like she should be in a beer bar in Tennessee and has the background of SoCal Mexican. She’s a walking contradiction that certainly makes her unique.
At least it should. Instead, she’s just about as generic a country sing as you can be. She sounds solid enough, but there’s just nothing different about her down to the point that she just sounds like she’s doing an impression of a country singer. A decent impression, but an inauthentic one all the same.
Grade: C+

Joey Cook Sang “Somebody Like You” by Keith Urban
Keith Said: It was fantastic. That’s what artists do.
J-Lo Said: That was all the best things about you.
Harry Said: You sound like if Keith and I had a baby.
The Verdict:
There was a girl on the show about half-a-decade ago who was probably the most talented person who ever performed on this show. Her name was Lilly Scott. She did things like play a mellotron while making Beatles songs all her own. She was totally unique, had a brilliant voice and should have won except that she was a little offbeat.
To call Joey the poor woman’s Lilly Scott is really not even close to far enough. She’s the dirt-poor penniless version of Lilly Scott and I’m getting insanely tired of how proudly weird she is. If she was really weird she’d just be weird, she wouldn’t announce it every chance she gets.
Also, she can’t play the accordion and she can’t sing. So there.
Grade: D

Katherine Winston Sang “Safe & Sound” by Taylor Swift feat. The Civil Wars
Keith Said: Gorgeous tone. I thought it was really nice.
J-Lo Said: It’s captivating. You have a magical quality to your voice.
Harry Said: You’re a phenomenal vocalist, but I question the song choice.
The Verdict:
Katherine has a very strange voice. It’s certainly not made for pop music, or country music, or really any type of music you hear on the radio. It sounds more like what you’d expect some mythic choir to sound like. The voice of the clouds. It’s almost not there.
It’s definitely cool that her voice is so unique, but I don’t see how it fits in this competition. This certainly wasn’t the right song for her vocals, and I don’t think there’s really one out there for her to choose.
Grade: C-

Shannon Berthiaume Sang “Who Knew” by Pink
Keith Said: Pink’s songs are really challenging vocally.
J-Lo Said: You are a phenomenal singer and you have to start believing that.
Harry Said: You’re so green. That novelty is going to wear off.
The Verdict:
It’s long been an adage on this show to never do Whitney, Celine or Mariah because they’re just far too superior of vocals for anybody to compare. Pink is unfairly kept out of that conversation: She’s one of the premier vocalists of her generation and to match her soaring rock voice is an extraordinary task for anybody to attempt.
Shannon certainly wasn’t capable of taking it on. There was an attitude to her voice that matched the song choice, but that was about it. She didn’t have anywhere near the vocal prowess to really handle the number and seemed overmatched the entire time. Don’t do Pink, ladies.
Grade: D

Loren Lott Sang “Note to God” by Charice
Keith Said: You’re giving everyone a run for their money.
J-Lo Said: That was a very brave performance.
Harry Said: That was powerful.
The Verdict:
Loren Lott says she’s an actress.
She’s either not very good at playing a singer or she’s really good at playing a bad singer who picks terrible songs.
So she’s either doomed or destined to become the second former ‘Idol’ contestant to win an Oscar. Either way, she should be a former ‘Idol’ contestant very soon.
Grade: D

Shi Scott Sang “Umbrella” by Rihanna
Keith Said: I don’t know that you really got me with that song choice.
J-Lo Said: I don’t know that they got the best of you.
Harry Said: You’re extremely talented, but it wasn’t the right song for you.
The Verdict:
Shi is just awesome. She has an incredible voice but has no idea how to sing with it. She couldn’t find the rhythm, melody or pitch of this song for a second but her voice still sounded amazing and she’s a completely compelling figure on stage.
I mean, she basically gave a heavy metal vocal to a symphonic arrangement of a pop/hip-hop song and seemed like she was going to have a nervous breakdown in the middle of the song.
What a beautiful catastrophe.
Grade: B-

Maddie Walker Sang “Love Gets Me Every Time” by Shania Twain
Keith Said: That’s not a really great song to show the strength of your voice.
J-Lo Said: I didn’t know if it was the right song for you to wow America.
Harry Said: It was a nice good solid performance.
The Verdict:
If Alexis was a decent impression of a country singer, then Maddie is just a dull one. There’s nothing compelling about her vocal or stage presence. She just strolled around the stage delivering a mundane vocal without any great moments or anything interesting going on at all.
Just completely boring and generic. Why can’t the show that produced Carrie Underwood get a single solid female country singer anymore?
Grade: D+

Sarina-Joi Crowe Sang “Mamma Knows Best” by Jessie J
Keith Said: That was the perfect balance of loose and tight.
J-Lo Said: I think you just rivaled Jessie J on that song.
Harry Said: You look great. You sound great. That was really really strong.
The Verdict:
Sarina was not on my radar at all going into the audience vote shows, but after one performance she’s become the biggest female blip. This girl has unreal and isn’t afraid to show them off. Yes, she becomes a little over-reliant on runs, but she handles them with such ease and confidence that they don’t seem at all excessive.
The judges made her go through Hollywood Week four times before they finally allowed her on the show. Maybe they were just waiting long enough to give her a chance to win. She’s definitely got the chops to go the distance.
Grade: A

Jax Sang “Bang Bang (Baby Shot Me Down)” by Nancy Sinatra
Keith Said: I love what you do. I thought that was killer.
J-Lo Said: We’re so lucky to have you in the competition this year.
Harry Said: Seeing you is going to be a fun thing to watch.
The Verdict:
So Jax appears to want to court a lot of comparisons to Lana Del Rey, and choosing a Nancy Sinatra song is the easiest way to put her squarely in that lane. Shrewd move.
People will say that this is a backhanded compliment, but she’s better than Lana Del Rey. She’s got a bigger range and more confidence in her voice despite a very similar tone and delivery. Her stage persona is totally different, but that’s not what she’s going for. She wants that offbeat but big vocal distinction and she totally nailed it in her first go.
Grade: B+

Tyanna Jones Sang “Lips Are Movin” by Meghan Trainor
Keith Said: Don’t be afraid to tell the band to play in a slightly higher key.
J-Lo Said: That voice is just from God himself.
Harry Said: I safely put you in the ridiculously talented category.
The Verdict:
One of my least favorite contestants this year singing one of my least favorite songs of the past five years by one pop music’s most detestable artists. Plus, Tyanna couldn’t stay in tune and went pitchy on every verse. Yes, she found some cool moments in the chorus, but undid those with unnecessary runs that she couldn’t really sing.
She’s destined to annoy me for weeks to come.
Grade: C-

Predictions:
As I mentioned last night, this first round is really about making an impression. It doesn’t really matter if it’s good or bad, as long as America remembers you. Those they forget don’t get the votes, and here’s who I think America will forget this week:

Shi not so much because she was unmemorable, but because the judges savaged her so badly that she won’t get many votes.

So there are exceptions to the rule. Unfortunately, Shi seems like this year’s exception.

Check back next week to see how I did with my predictions and for recaps of the top eight boys and girls.