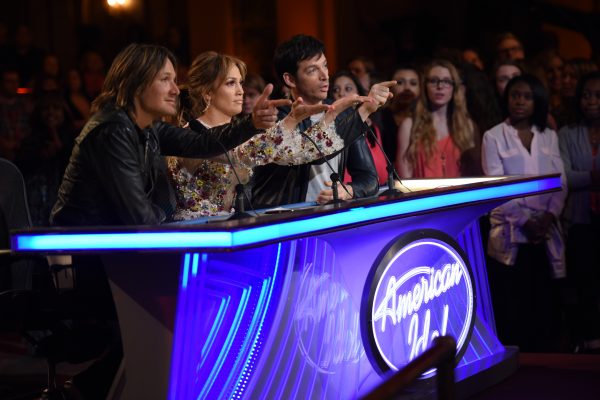 It was Motown Night for the boys on last night’s ‘Idol’ and also the first night of the cruel new elimination system that saw four guys prepare tunes only to never be heard.

Yes, this year the results and performance shows will be mercifully combined, adding even more tension to the performances and doing away with that unnecessary hour where nothing much happened. The way they’re doing it is tortuous as the guys sat in the dugout last night waiting for their turn at bat only to have four never get called up.

It’s devious fun, but it will be interesting to see how it affects performances going forward as a few showed the nerves of the moment when they took the stage.

So who made it and how did they do last night? Read on to find out.

Daniel Seavey Sang “(How Sweet It Is) To Be Loved By You” by Marvin Gaye
Keith Said: Don’t be too stuck in the melody.
J-Lo Said: It seems like you’re having fun, but I think the song was a little bit low for you.
Harry Said: I felt like you weren’t swinging hard enough with this group.
The Verdict:
Daniel ditched the guitar tonight and let his be his only weapon to make tween girls swoon.
I’m not sure how he did in the swooning department, but in the vocal department it was a mixed back. He flashes a lot of talent – hitting some cool runs and a tone that just shouldn’t be coming out of his body – but has trouble staying consistently in the pocket. He allows his vocals to get lazy and disconnects from the rhythm way too often.
The kid’s got talent but he lacks experience in a real way.
Grade: D+

Mark Andrew Sang “Papa Was a Rollin’ Stone” by The Temptations
Keith Said: I’m just glad you’re here, man.
J-Lo Said: I’m not sure that song in that way was moving me.
Harry Said: I thought you had a good time and you sang it well.
The Verdict:
On Motown night, Mark goes all disco with a weird upbeat take on this classic.
It’s a really strange choice for Mark. This can be a big deep soul number and he has a big deep soul voice. Choosing to play away from his strengths really doesn’t make sense. Yes, it was a little more fun than the original, but it only provided him a nice performance with what could have been a showstopper.
Sometimes arrangement choice is just as important as song choice.
Grade: C+

Rayvon Owens Sang “My Girl” by The Temptations
Keith Said: I’m interested to see what you do next.
J-Lo Said: I thought you did a great job. You made it your own.
Harry Said: Everything was really strong, but I want to see more than just your nice song.
The Verdict:
In Rayvon’s video package he noted he’d spent years gigging as a wedding singer. His history was very apparent here.
The way the song was arranged and the way Rayvon sang it (treacly, soulless, honey-dripping pleasant) almost demanded a daughter be dancing with her on a makeshift dancefloor. It was just so nice. Like it was made to be enjoyed but not steal focus from anything else. This isn’t the performance you want to give when you’re trying to distinguish yourself from seven other guys. It’s the performance you give when you don’t’ want to upstage the Best Man Toast.
Rayvon’s got a solid voice, but he’s got to understand his current audience.
Grade: C

Adam Ezegelian Sang “I Want You Back” by The Jackson 5
Keith Said: That was the perfect song for you
J-Lo Said: You really did a good job on that song.
Harry Said: Your voice is dangerous and you nailed every note.
The Verdict:
I don’t know what Adam is exactly. He seems like the show has reached some sort of critical mass after all these years and spit out fat Sideshow Bob to make us all finally shake our heads and accept that America is finally out of undiscovered talent.
But then he starts singing and becomes John Belushi’s impression of Joe Cocker crossed with Rob Halford in the best way possible. Somehow, singing in an ill-fitting tux made it even better.
This kid will always haunt my nightmares, but now it seems like their soundtrack might not be too bad.
Grade: B

Clark Beckham Sang “The Tracks of My Tears” by Smokey Robinson
Keith Said: You should have played the guitar without the band and you would have broken everybody’s hearts.
J-Lo Said: You have such a great voice, but it’s time to let loose.
Harry Said: It was lacking a beginning, a middle and an end.
The Verdict:
Give this kid the title right now. He just went all easy A.M. radio on a Motown classic and it totally worked. This guy is Seals, Crofts, Hall, Oates, Sanford, Townsend, England Dan and John Ford Coley all rolled into one throwback talent that seems ready to make a bunch of songs that hang on the chart for like a year because they fit so many formats.
Bonus points for the cool sped-up outro that showed a totally different side of best Beckham on the planet.
Grade: A-

Nick Fradiani Sang “Signed, Sealed, Delivered (I’m Yours)” by Stevie Wonder
Keith Said: You didn’t look comfortable playing the guitar.
J-Lo Said: It was a great song. You did it well.
Harry Said: I thought that was very strong.
The Verdict:
Look. I know there’s people out there who like Jason Mraz. I know he’s sold a lot of records. I know people think his music is not only tolerable but enjoyable. I’m not one of them.
So you can imagine that I don’t really take kindly to somebody turning a Stevie Wonder classic into a poor-man’s Jason Mraz tune. He may have a pleasant voice and know how to stay on pitch and in tune, but that arrangement was just intolerable to me.
Grade: D

Qaasim Middleton Sang “I Wish” by Stevie Wonder
Keith Said: So good, man!
J-Lo Said: You so damn funky, it’s crazy. You own that stage.
Harry Said: I thought it was extremely good. That’s what we’re looking for.
The Verdict:
Qaasim’s an entertainer first and a singer second. That was more clear than ever in this performance.
Be it some funked up dancing, joining hands with the backup singers, or even bits of mime involving his hair, Qaasim was an insane spiral of energy that took over the stage for 90 seconds of old-school fun.
His vocal wasn’t perfect, but it was good enough that it didn’t matter. Qaasim was all about the performance on this number, and he definitely delivered on that aspect.
Grade: B+

Quentin Alexander Sang “Master Blaster (Jammin’)” by Stevie Wonder
Keith Said: You know who you are. That was a Bulls-eye.
J-Lo Said: That was so easy. That was so smooth.
Harry Said: My favorite part was just how you settled into the groove of that.
The Verdict:
After his excellent performance last week, I was expecting more from Quentin. This performance lacked a certain vitality that he always seemed to have in abundance. Here, there was just a certain verve lacking from what he was doing. It may be because he was the last contestant saved and he was almost singing out of relief or it may just be that the relaxed groove of the arrangement.
I’m not sure exactly what the culprit was, but it stole just a little bit of Quentin’s swagger.
Grade: B-

Predictions:
If you’re keeping score, you’ll know through process of elimination that last night’s unlucky four were Michael, Savion, Riley and Trevor. That leaves me two-for-four. I’m definitely surprised about Trevor whose nerd-with-guitar act seemed poised to carry a ton of votes, but voters seemed to be buying it even less than I was.

This week, I have to deliver some bad prediction news: I think it’s the end of the line for my boy Clark. The judges weren’t too kind on him despite what they seemed to think was a solid performance. Sometimes this panel of judges is actually harder on those who they like more and it ends up undermining them with voters. Their comments for Clark will be enough to seal his fate, I think.

The other predicted cast-off is Mark Andrew. Going second and singing a very forgettable version of that song is a good way to get voted off, and I think that’s exactly what will happen.

Check back tomorrow for a recap of the Top 8 Girls.