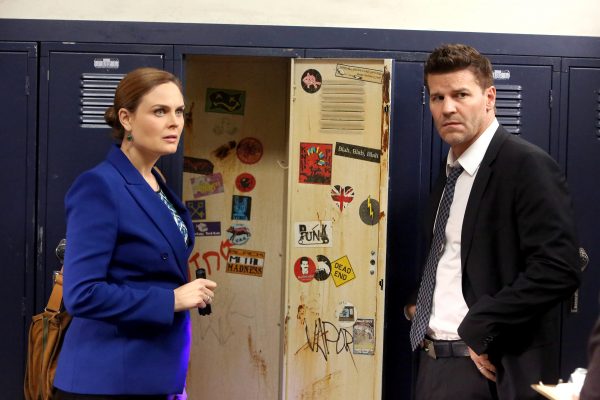 Hey, Bones fans. We start out once again in the B and B kitchen, with Brennan grumbling about pandering to the masses.

Brennan on Twitter!
Clearly Brennan’s publisher has lost their mind if they want Brennan to start a Twitter account. This woman says whatever is in her head. Within five minutes she’d be ticking off religious groups. Booth disagrees with me. You’ll see.

The COTW was found in an abandoned book store, but forget about the dead body. Brennan is torn up about the books strewn about, particularly when she finds her book in the clearance section. She’s so upset, it’s the last push she needs to get on Twitter.

But lucky for everyone, she’s out to prove how online sociological behavior is destroying interpersonal relationships. Angela and Cam both have the appropriate horrified expression when they find out. The first tweet is a link to a two-hundred page article. Squintern Warren, the most annoying one of the bunch, and that’s saying something, reminds Brennan that on Twitter, pithiness is key.

When Booth discovers Brennan has only ten followers, he tells her to consult Warren. Uh…be quiet, Booth. To my dismay, Brennan takes his advice. The end result is a selfie of the two of them, complete with a hashtag, which Warren retweets and says Brennan will now be a Twitter sensation. (In your words, “Ego much?) Though I admit it’s better than tweet 1, tweet 2. I like Brennan’s idea of taking a selfie with the skull better.

Though Brennan is ratcheting up the followers, I’m pleased to say Angela gives Warren a verbal smackdown about Brennan’s competitiveness and how she’d want more Twitter followers than anyone, and how it’s better to just let Brennan be Brennan. YES!

The Corpse of the Week!
Mia, twenty-two. She was part of United Teaching Fellows, where college graduates teach at underperforming schools. Boyfriend Hunter was on a “Coffeehouse tour,” since he’s a musician. Is there such a thing? Making the bf look super guilty is that Mia had a trust fund, and she put the fancy apartment in both of their names.

Caroline! Weeee! I’ve missed ya. Where have you been hiding? Anyway, she has a message for Booth: Be extra careful with the Mia case. Caroline is on the board of United Teaching Fellows. She doesn’t want word getting out that it’s dangerous. She gives Booth the name of the principal of the school and reminds him how she had to claw and scrape to get her education. Booth and I both remind her how awesome she is now.

The Case!
Booth and Aubrey arrive just in time to see Mia’s fellow teacher, Shane’s, Smart Car being hand-towed by the students. He sees it as a bonding experience and just drives it off the front lawn at the end of the day. Shane brings B and A to Mia’s classroom, where principal Anne Franklin is waiting. This woman puts up with zero crap.

In Mia’s desk, Booth finds a note with MM on it, standing for Marcellus Miller, one of Mia’s students, along with 187 Bitch. That would be the police code for homicide, so Booth seems to doubt how much of a success story he is. During interrogation, Marcellus comes off like a sweet, scared kid, but his legal guardian and brother, Keith, only nineteen, tries to get the word b*tch past Caroline. As expected, she hands him his ass.

Poor Mia was shoved in a locker, and the three-pronged hook bashed into her skull. Brennan is familiar with this mark, because she used to be shoved into lockers. Said bloody locker was unassigned, but the dog also goes crazy on the janitor, who has a shady past but is innocent. She gave him a watch. He liked her. Next!

Mia had a Twitter, but it was only to follow students. Her last tweet talked about how it sucked to be so wrong about someone. Ah, the good ol’ subtweet.

Angela’s investigation finds that Hunter was clearing the browser every day, because he was cheating, and his coffeehouse tour was cancelled. When Hunter tries to prove he was with a girl at the time Mia was killed, he gets the “Get Lost” hotline. HA!

Turns out a month previous, someone stabbed Mia in the hand. Only not. It’s Keith’s knife. Mia believes Keith forced Marcellus to get a job, so she picked up the knife by the blade and threatened that if Marcellus missed more school, she’d say Keith attacked her. But Keith won’t tell where he was when Mia was murdered. Marcellus does tell Aubrey that Keith was stealing food. Aubrey promises he won’t arrest Keith. It’s a sweet scene.

Solving the Case!
It’s time for Brennan’s big epiphany. Mia’s spine and knees were all smashed up postmortem. It’s because the killer had to put her body in the passenger seat of his car to move her, since his trunk was too small. No, this isn’t a new carpooling strategy. Hmmm…who has a really tiny car? Yes, it’s Shane. Who changed all of the answers on the standardized tests to make him look better than Mia. Important interview with Dept. of Education, he tried to grab the tests from her hand, she screamed, he strangled. It’s a good thing Caroline isn’t in the room when he says he wanted to get out of the school, because the kids weren’t going to amount to anything.

Caroline is Made of Awesome!
I love her so much. Anyway, at a diner with Marcellus and Keith, Caroline vows to tutor both of them. She wants Marcellus to finish his education and Keith to get his GED. She gives them her patented don’t mess with me look and asks if she’s going to be wasting her time, but these kids know when Lady Luck has shined down on them. She gets them pie. I tear up.

In the end, Brennan has three-thousand followers. She tweets about the teaching program and realizes social media isn’t only about selfies.

Bring back Caroline more often, show. She classes up the place.