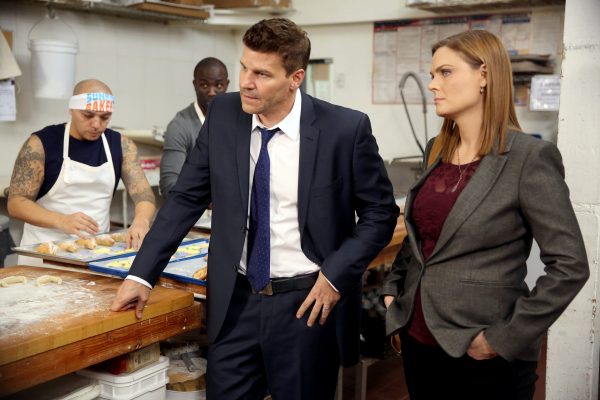 Hey, Bone fans. Today’s episode starts with a minor crisis. Booth can’t find an important picture of Brennan and Christine taken while he was in prison. No, another printout won’t do, since that pic got him through the ordeal. It’s lucky Booth married an anthropologist, because Brennan excavates it from the trash in no time. Crisis averted. On to the Bones top five moments.

More Squintern Drama!
What isn’t a minor crisis is what’s going on with Cam and Arastoo. His brother has cancer in his brain stem. They can’t remove it, so he doesn’t have much time. After Arastoo’s parents left, the government wouldn’t let his brother leave. Technically, Arastoo left before he was exiled, and he’s willing to risk going to check on his brother.

Cam seems shaken to the core as she realizes she has no say in his decision. Then calls him “Mr. Vaziri.” He tries telling her he loves her, but she says, “I’m sorry, but I don’t know what that means right now.” OUCH!

Cam goes to Booth for advice, because he’s been to Iran. His prognosis? Worry. But then he makes her laugh. It’s a nice moment between them. Booth is never in the lab any more, so this is a rarity.

In a major role reversal, Arastoo tries to talk about work, but Brennan takes a non-sequitur route to bring it back to his situation and scolds him to be honest with Cam about the risks.

Instead, he guarantees he’ll be fine. But Cam at last understands and tells him she loves him. In the end, he finds out his brother is worse, and he leaves in only a few hours. There’s a tearful goodbye.

Corpse of the Week!
In a break from tradition, we saw the corpse before he was one, since he was escaping a knife-wielding psycho. He tumbled into a blast area and thought he was safe but got blown to bits.

Back at the lab, Brennan hands Arastoo a flat pile of stuff that used to be a skull and asks him to put it back together. She does not use the Christine puzzle analogy this week.

The unfortunate victim’s name is Connor, and he’s an ex-con. As if getting blown up wasn’t enough, the knife-wielder tried to cut out his tattoo.

When Aubrey goes to check out Connor’s pad, he finds Connor’s girlfriend, immediately says something to piss her off, as is his special talent, and then starts interrogating her while she’s only wearing a towel. Turns out Connor told her nothing about his prison life and worked ten hours a day in a bakery. What she neglected to mention was that he took a bunch of drugs.

Did You Remember Booth was in Prison?
I guess this is the week we’re reminded of it throughout the show and just how traumatized he is. Not to minimize what he went through, but he was there for only a few months, got crap because he was a law enforcement officer, and had plenty of people on the outside working to clear him. A common prisoner he was not.

Booth tells Brennan not to judge Connor just because he was in a gang. He reminds her that when you’re behind bars, you gotta do what you can to survive. This theme keeps going, where Brennan spouts recidivism rates, and Booth talks about how there are some good men in prison who only want to turn their life around. She points out Booth was innocent, her dad was an anomaly, etc.

A Bakery Full of Delicious Pie Run by Ex-cons? Why not?
Roger Flender, the owner, hires ex-cons, because his dad was one. He’s upset his employees will think they’re suspects. Uh, yeah. Even if they were never ex-cons. As Brennan says, Roger himself is a suspect. Murder 101: first suspect those the victim knew. Don’t they watch Investigation Discovery?

My question. Why is it not until B&B visit the bakery that they first hear the name Pemberton? Isn’t that one of the first things Booth should have researched? Find out who the victim of his crime was and if they’d want revenge?

Anyway, Connor was a driver in a convenience store robbery, and Pemberton’s sister got shot. Pemberton would come by and threaten Connor, but Flender didn’t think it was noteworthy enough to mention, because it happens all of the time to the ex-cons, completely missing the point that the other guys weren’t MURDERED.

They figure out where Connor was being held before he broke free, and inside they find a ton of blood, three incinerated skeletons, and patches of skin with tattoos hanging up on hooks like laundry. YUCK. One of the victims was a priest, and the other was a fellow convict of Connor’s.

Solving the Case!
They find a connection to Rockwell with both the priest and convict. He used to be an altar boy and got into trouble when he was a kid. The convict served time with him.

So, Rockwell just got out of prison and became a serial killer? These killings are ritualistic. This guy seems like a common criminal.

Anyway, Rockwell is MIA at the bakery, but Flender agrees to track him down. For some reason, Rockwell agrees to meet with him, even though he immediately senses a setup. Booth wings Rockwell and arrests him. That was anticlimactic. I was sure it was Flender, and that he’d inherited some kind of serial killer gene from his dad. He’d been held up as such a do-gooder the entire time, I was sure of it. This way it seemed like a whole lot of buildup with a quick ending that made little sense. I never got the vibe that Rockwell was this evil mastermind.

That’s all, folks! Do you think Arastoo is coming back from Iran? Gosh, I hope so. I’ve barely gotten over Sweets.