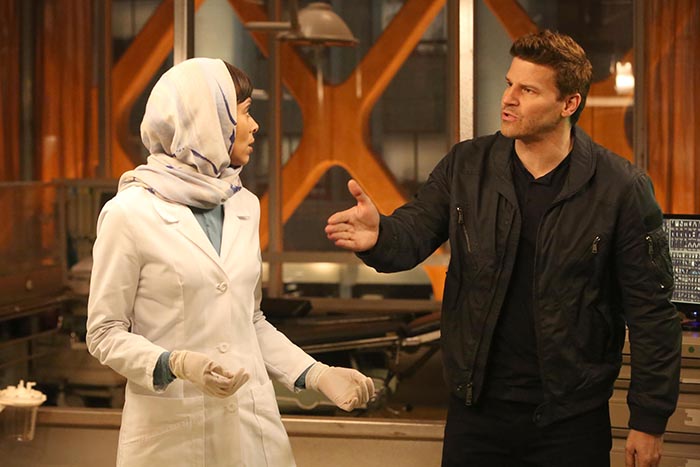 Hey, Bones fans! Looks like everything that’s been building up is coming to a head tonight, so let’s get started. Here are your Bones Top Five Moments!

Murder in the Middle East
Arastoo calls Cam all giddy as he picks up orange blossom ice cream for his brother, Hamid, who is in full remission. But talk of their pending reuniting is cut short when Arastoo spots a guy following him and hides before a couple of guys drag him into a van. There’s much panicked screaming before the line goes dead.

If there’s a rotting corpse lying on a table, it must be Thursday. Arastoo is brought to a private surgical center where he’s met by a high-ranking member of Parliament, Majid Namazi,. Arastoo’s ineffectual cries to be set free because he’s an American citizen fall on deaf ears. Majid kindly points out that while in Iran, Arastoo is an Iranian citizen. Plus in 1997, when Arastoo was eighteen, he was charged with crimes against humanity for writing a poem about democracy that was published in an underground magazine. The edict not being issued was an “oversight” that will be rectified if Arastoo doesn’t examine that rotting corpse, who is Magid’s son, Darius.

The U.S. has no diplomatic ties in Iran, so Booth’s hands are tied. He’s got Danny at the C.I.A. on it, but logical Cam wants to go to Iran on her own and rescue him. This makes total sense. Though the visa would take fifteen days, Danny can rush it through in hours. Good for him? Brennan wants to go with Cam, but BABY, so Booth volunteers.

Angela’s magical computer is able to determine where Arastoo was taken, but the case may be wrapped up in the next five minutes. Cam and Booth jet to Iran like it’s a vacation hotspot, are met with Danny’s contact, Hooshmand, and taken straight to a car with Majid inside. Looks like you guys can just go back home now. And Majid is providing the tickets. Problem solved! Then Booth points out an entire Jeffersonian staff and the FBI may speed things up.

Note to Cam and Arastoo: PDA in Iran by two people who are not married is frowned upon. Future displays may result in a hundred lashes.

Though we saw different, Darius’s death was ruled accidental from falling down the stairs, because he was drunk. Majid insists his son didn’t drink.

Bing, bam, boom, and Angela manages to hook up her magical computer to the room’s camera. Two minutes later they’ve got cause of death, which was a hit to the head before Darius went down the stairs. So, yay! Everyone can go home now. Oh, so now Majid wants them to solve the murder.

Darius’ cousin is an officer participating in the investigation. He says Darius had no time for a girlfriend. He spent all of his time working at a prestigious bank where Dad had placed him. Booth talks to the owner of the bank who leads them to a disgruntled contractor Darius had denied a loan to.

We’ll call the contractor Red Herring. He immediately calls Darius’s cousin a traitor. The cousin has a slight problem with translating. He interprets Booth’s “I’m doing everything by the law” to “Lie, and he will slit your throat.” But the cousin does tell the truth that the contractor heard arguing and saw a foreign blonde woman leave the house in a rage.

Cam does find evidence that Darius and the blonde woman had sex. And gross, two Dachshunds made a meal out of him. Good news, though. Since dogs are rare in that part of the world, they are usually brought in by foreigners and need their own passports.

The blonde is Oksana, an executive at a Russian oil company, and the owner of the dogs. She confirms she and Darius were in love, which enrages the cousin. Oksana and Darius fought, because he was drunk and obviously frightened but wouldn’t tell her what was wrong. When she came back to apologize, that’s when she found Darius as dog food.

All You Need is Love!

After finding out his son is a drinker, a fornicator, and a traitor, Majid is no longer interested in finding out who the killer is.. He tells Booth they’re free to go. Good news, right? But Cam and Arastoo say that Darius received a text that someone was trying to break into his laptop, and it happened after his death.

After Cam, Arastoo, and Booth read Majid the riot act, with their speeches coming in at a ten on the corny and ridiculous trope scale, Majid agrees to take jail off the table and let them solve his son’s murder.

Booth the Gambler
It’s been a little while since we’ve checked in on Booth and his winning streak when he got Brennan the necklace. Though Christine is supposed to be smart, she thinks her father would ring the doorbell to his own house, so she opens the door without checking who’s there. It’s a guy looking for Booth who owes thirty grand. Seems Booth owed fifteen grand and placed a double-or-nothing bet. The debt collector guy, Jimmy, makes not-at-all subtle threats against Brennan and her unborn baby before she slams the door in his face. Booth, my suggestion is to stay in Iran.

Brennan comes clean to Aubrey, because he was the one who warned Brennan about the dangers of Booth going undercover. Though I think it’s more important that the bad guy left his card, and Aubrey can look him up.

It turns out Jimmy is his real name, so he was easy to find to bring in for questioning. He is not intimidated by Aubrey’s steely stare. He threatens to go to the media to report Booth’s debt problems.

Brennan talks to Aubrey who is about to pay off Jimmy. He found out Booth’s old bookie wouldn’t take his bets, which is why he went to Jimmy. I was wondering about that, since his old bookie had helped with the gambling case that got Booth into this mess and had been worried about him. He’d seemed like a nice guy.

Solving the Case!
It should surprise nobody that the cousin was the one who tried to access the laptop. Booth confronts him, but in a surprise move, the cousin insists he was doing it to protect Darius from Daddy. Besides the drinking, fornicating, and associating with unclean dogs, Darius was also advocating for women’s rights and freedom of speech. Majid comes in to warn Booth that someone called the general to say what Booth and his team have been up to, so they only have an hour to get the heck out of Dodge or be thrown in prison.

With fifteen minutes to spare, it’s discovered Darius was thrown down stone steps like the ones at the bank, and the owner of the bank is an embezzler. Darius was compiling evidence against him. That’s when the police come crashing in to shut it all down, but Hooshmand comes in and saves the day. They go to arrest the owner of the bank.

Majid magically turns into a sweet guy who misses his son and offers to send Cam some tea. Then Arastoo and Cam visit Hamid to say goodbye. He says he’d like to come to the states for their wedding. Cam, you risked your life to go to Iran and get your man. You have to admit the time for commitmentphobia is over.

Confrontations!
Booth comes home to what he hopes will be a romantic reunion and is pleased when he finds out Christine is with grandpa. Then Brennan starts in on him with why he’d asked her about a baseball player and how long it would have taken for him to recover from his surgery. Booth plays it off like it was no big deal, so she point-blank asks him if he’s gambling, and he looks her in the face and lies to her. When she tells him about Jimmy, he still insists it was only one bet, even though he knows she’s aware of the amount he owed.

Brennan kicks him out of the house but looks torn up about it. Booth picks up his bag again and leaves.

That’s it for now. I’m glad the Arastoo arc came to an end, and Brennan knows everything that’s going on. Let’s hope this couple doesn’t stay apart for long, because they’re better together.