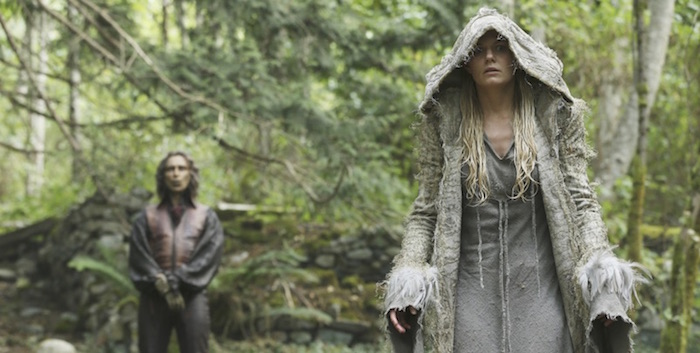 Dark Swan will play a big role on this season of ONCE UPON A TIME and our heroes and villains will team up together to try and stop Emma from giving in to the darkness. Will they ultimately be successful? It’s impossible to tell, but Emma’s journey towards darkness is an interesting one. After having screened the season 5 premiere, we have some spoilers to share with you.

The Camelot Connection. It’s clear that Camelot is going to play a big role this season. In fact, the first scene of the episode involves a young Emma going to see the Disney movie “The Sword in the Stone” and receiving a dark warning. Years later, in another land, we see Arthur and Lancelot as Arthur is on the hunt for Excalibur. You’ll soon come to realize that Excalibur has a very interesting connection to the ONCE UPON A TIME mythology we’ve come to know and you will also get a peek at the fabled kingdom. In fact, it’s going to be play a big role in the season’s mysterious storyline.

Fighting the Darkness. Emma, meanwhile, surfaces in the Enchanted Forest after emerging from a puddle of black goo. It’s there she meets Rumple. Well, actually, it’s not really Rumple — it’s a manifestation of the Dark One’s powers that is masquerading as Rumple. Needed to say, he’s whispering evil nothings in her ears and trying to get her to give in to both darkness and magic.

Merida the Brave. Pixar’s Merida is introduced quickly in the premiere when she and Emma cross paths. We’ll learn what happened to her family and why she’s trekking through the Enchanted Forest.

Deal with the Devil. As Emma makes her way through the forest, Regina, Hook, Robin and the Charmings are back in Storybrooke and desperately trying to figure out how to get to Emma. The Apprentice gives them a wand that will help, but they soon realize they’ll need to work with an old enemy in order to succeed. Naturally, things don’t go well with that, but our heroes and villains do set out for the forest themselves (with an amusing meta moment by Leroy and the dwarves).

A New Mystery. As mentioned, there’s a big mystery that’s set up by the end of the episode. We won’t spoil the details, but let’s just say that something ominous occurs and it’s clear that everyone will be mulling over what happened for weeks to come.