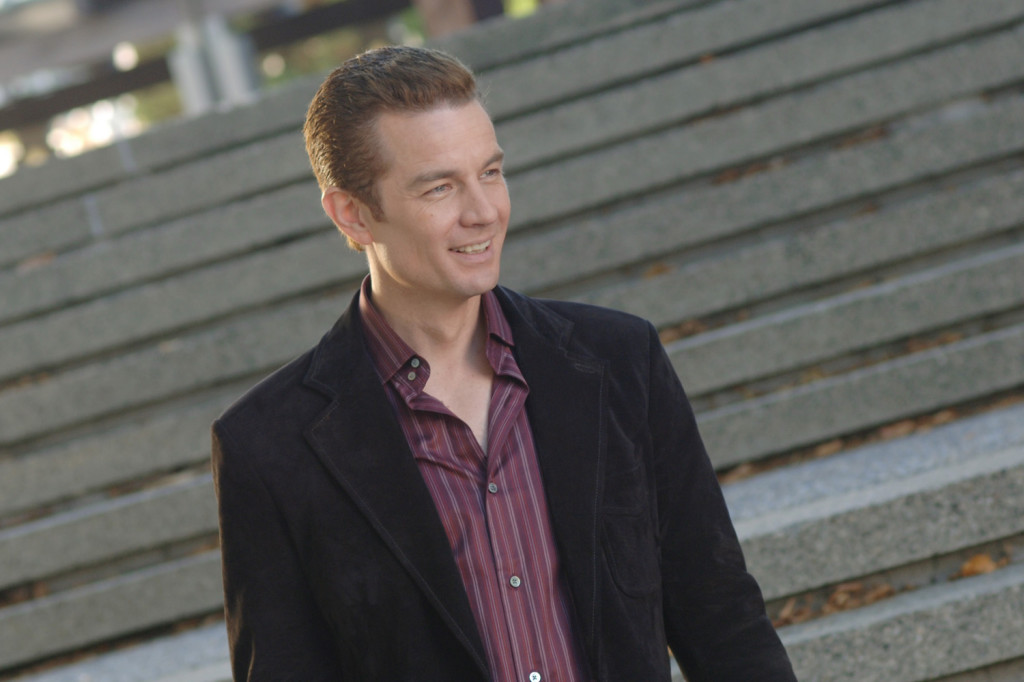 Actor James Marsters is best known for his role as Spike the vampire on the hit classic series BUFFY THE VAMPIRE SLAYER, but many fans may not know that he is also the lead singer of a rock band called Ghost of the Robot. In a exclusive interview, James talks about his upcoming album, Bourgeois Faux Pas, his favorite BUFFY episode, and the possibility of working with Joss Whedon again.

I had the chance to listen to your new single and it was great. What inspired you to write the song?
I was ending yet another complicated relationship when I read an article that said, “If a woman has a good relationship with her Father then it will be easier for her to have good relationships with me later on in her life.” The next day I noticed a woman named Katie standing in line for lunch. She had a large tattoo that said, “Dad” on the back of her neck. The back of the neck is not a painless place to get a tattoo, nor is it subtle. Only a badass gets a tattoo on the back of their neck. I asked her about it, and she said that she got the ink because she has an awesome Dad whom she loves a lot. I took it as a sign from the Gods that I try to date this beautiful, kind, badass. To seduce her I wrote the song ‘Katie’. I wanted it to be the most innocent love song ever written, so I wrote the chorus from the perspective of a 7 year old!

“Katie, come out and play,
I’ve got a present for you today,
It’s got your name on it,
I hope I spelled it right”

How long after you released your last album did you begin working on ‘Bourgeois Faux Pas?’
The song writing has been going on for year for ‘Bourgeois Faux Pas.’ We have three principle song writers in Ghost of the Robot: Charlie, Sullivan, and me. Between us we have about four albums worth of material for future projects. I guess we took a year off after we came out with ‘Murphy’s Law’ before we gathered as a band and started sifting through all those songs. We wanted to return to the hard driving Rock sound that we debut with on ‘Mad Brilliant’, and incorporate all that we’ve learned about sound production. The result is an album that screams, and also shimmers.

When do you plan on performing your next concert?
Touring has always been the challenge for the band. When we got together, three of us were still in high school, and a year after that, college. Today, our newest member, Sullivan, is at a University in Washington State. School is super important sooo… We have a major tour in the Summer. This year it was France, Spain, and Italy. Last year it was Germany, England, and France. Then we do shows during the holidays, but it all has to fit around school. Next Summer, I’m pushing for the Americas – US, Canada, Mexico, Brazil, and Costa Rica.

Can you tell me anything about your upcoming television/film projects?
I’m waiting to see if HBO is picking up a pilot I filmed for Jennji Kohan and Gus Van Sant called, ‘The Devil You Know.’ Jennji created ‘Orange is the New Black,’ and Gus is one of my favorite directors of all time having helmed ‘Good Will Hunting,’ and ‘My Private Idaho.’ It’s a daring, inventive, controversial take on the Salem witch trials.

Many fans are dying to know what was your favorite Buffy episode to film?
My favorite BUFFY episode to film was the musical ‘Once More With Feeling.’ The cast was terrified. We thought the show was jumping the shark. We thought Joss had gone insane and needed professional help. We all pleaded, and lobbied, and whined to try to stop him, but he was undeterred. At some point we stopped resisting and got to work. In the face of certain doom we knuckled down, stopped complaining, screwed our courage to the sticking place, and decided to go out swinging. And then it worked! Joss was right all along. When he gets this look in his eyes, I’ve learned to go with it and enjoy the ride.

Are you open to the idea of working with Joss again?
Yes, of course, I would work with Joss again! I can’t wait to see what he does next. I’m hoping that he will create a world from scratch again. I love it when he winds up his own universe. I told him years ago that if he had five lines, or five hundred, I would come for them. That has not changed. He’s the ballsiest storyteller I’ve ever met. He’s willing to offend his audience. He’s willing to hurt them. All in the name of Love.