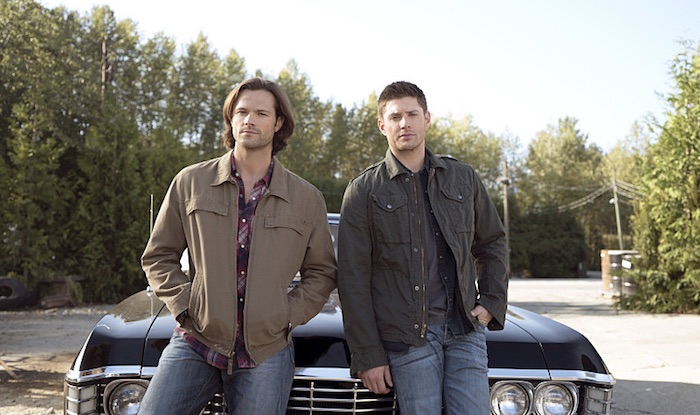 The Winchesters took a bit of a break from the Darkness in the most recent episode of SUPERNATURAL, hitting the road for a good old fashioned case. But it turns out they couldn’t escape the force they have unleashed upon the earth and they learned that even run-of-the-mill monsters are frightened of the Darkness.

During a recent visit to the set of SUPERNATURAL in Vancouver, reporters sat down to talk with stars Jared Padalecki and Jensen Ackles about this season’s big bad, the brothers fighting side-by-side and more.

When asked about Dean’s connection to Amara, Ackles said that “we will see kind of that relationship a little bit more and see what exactly that relationship is. I don’t think that he knows what to make of it. I’m not sure that he understands the connection and why [he has it with her].” Be prepared for Dean to hide his nerves about this connection.

Meanwhile, as the brothers fight together against a common foe, the actors were asked to give their thoughts on the nature of the Darkness and whether she (it?) is inherently evil. While Padalecki thinks that she is, Ackles was a bit more forgiving, explaining that it’s possible the Darkness “isn’t inherently evil, [but is maybe] opposite of what we know in the world as good. Or as light, so to speak. Which is why she is the Darkness…..I think it means she is out to bring darkness and whatever that means is yet to be determined.”

Padalecki and Ackles were also asked about the monsters who were frightened of the Darkness in “Baby” and the fact that they’re building up their forces to combat the Darkness. Will we see more of that? Padalecki joked that we’ll see “ghoul-pires at the bar with the angels and the demons”. Ackles went on to explain that we’ll continue to see unique alliances. “People are kind of getting their defences together. They’re forming these alliances and saying ‘listen, it’s not about you and me anymore, it’s about us and we’re going to lose all of this if we don’t join forces and man-up’. I think we’re going to see a little bit more of that in the future.”

Watch the interview with Padalecki and Ackles below and don’t miss the next new episode of SUPERNATURAL on November 4 at 9:00 p.m. ET/PT on The CW. You can also watch what the actors had to say about filming “Baby” and the return of Matt Cohen here.