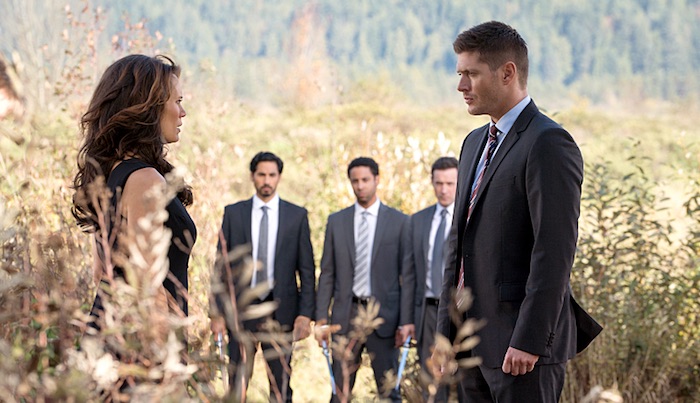 Amara was all grown up when the mid-season finale of SUPERNATURAL began and she was decided to kill a group of devoutly religious people for worshipping God, hoping to provoke a reaction from her brother.

Sam, meanwhile, continued to have visions of Lucifer in the cage. Seeking answers, he prayed and received a burning bush in response. Dean hated this plan and didn’t want Sam to go anywhere near the cage, but Sam was adamant. So the brothers called on Crowley, who was also reluctant to lead them to the cage until they told him this may be the only way to defeat the Darkness. When Crowley asked why Amara kept sparing Dean, he turned the attention back to the Lucifer situation. When Dean said he didn’t want his brother anywhere near danger, Crowley suggested there may be another way: the Book of the Damned.

Back in Crowley’s lair, he greeted his newly re-captured mother. Enter the Winchesters, who told Rowena that she should partner with them to help defeat the Darkness. But what’s in it for Rowena? Crowley promised to call off his assassins if she agreed to help and the Winchesters promised limited access to the codex.

As the Winchesters and Crowley hatched their plan, Amara sought her brother in a church. But praying to him got no response and she argued with a priest about God’s goodness. And then she decided to go on a killing and soul-feeding spree as she desecrated God’s house. Meanwhile, more of heaven’s middle-management gathered to figure out a way to defeat the Darkness without God’s help.

As Sam supervised Rowena and her access to the Book, Dean headed out to investigate the rash of murders that Amara was conducting. But Dean started to get a weird vibe just as he saw Amara again, distracting him from Sam’s call. She swept them off to a pier for their latest reunion as Sam, Rowena and Crowley headed off to limbo to summon Lucifer to a cage that Rowena had set up there.

Amara explained to Dean how God had forced her hand by ignoring her, while Lucifer was summoned to the cage. He greeted Sam and Crowley as Rowena fanboyed over him. Sam told him that the Darkness had been released and that that God was nowhere in sight. Although, he did tell him that God was giving him visions to seek out Lucifer. But was Lucifer on board to help? Well, Lucifer insisted that he could better help if he had a vessel….perhaps Sam himself?

As Dean snapped out of his stupor around Amara, he found he couldn’t kill her with his blade. She told him she couldn’t be resisted, so he should just give in. After she kissed him, she told him that they were bonded and that it was destiny. “We will become one,” she warned Dean. Enter the middle-management angels, who had come to kill Amara. Dean warned them to leave, but Amara just smited them down. And that got God’s attention. Just as the lightening and thunder started up, Amara sent Dean away.

Dean found himself back in the park where Amara had found him earlier, with no one else the wiser that something was amiss. And down in limbo, Sam refused to be Lucifer’s vessel again. But when Sam turned his back to the cage, the warding sigils failed and Sam found himself trapped inside with Lucifer. He told Lucifer this was playing out as God had told him it would be, but Lucifer revealed that when the Darkness descended it had damaged the cage. And God wasn’t sending Sam messages — Lucifer had been. “It was always just me,” Lucifer told him. “So I guess I am your only hope.” As we zoomed in on a terrified Sam, we faded to black…..

SUPERNATURAL will return with all new episodes on Wednesday, January 20 at 9:00 p.m. on The CW. Check out a preview from the January return below.