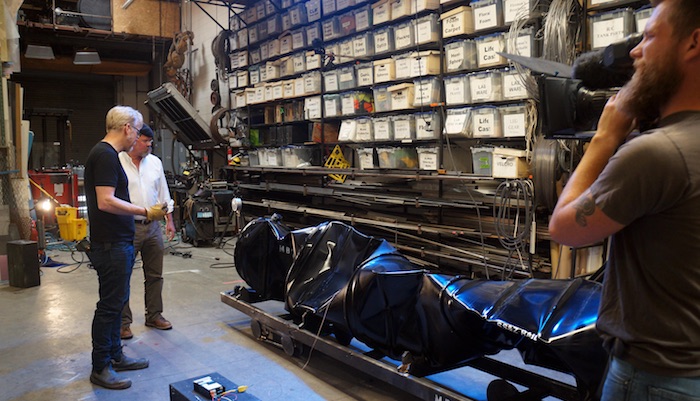 This week’s “Tanker Crush” episode of MYTHBUSTERS definitely wasn’t a “been there, done that.” After crushing more than 900 explosions, the MYTHBUSTERS crew finally took on a program about implosions. And it was a single-minded effort to do but one implosion — that of a 67,000-pound cold-rolled half-inch steel rail tanker, something that’s been on the MYTHBUSTERS list since nearly day one.

Why so long to tackle this myth? Because of its complexity.

In the original story, two rail workers steam cleaned a rail tanker car at the end of the day, then sealed it up, closing every hole and hatch. It rained, cooling the steam and creating a temperature differential, which means the external pressure was greater than the internal pressure, and the steel tank caved in. But to recreate the effect required a lot of effort, finding someone willing to part with a tanker car for the test, locating somewhere safe to perform the experiment, and getting permits. It took the final season to bring everything together.

Adam began by demonstrating the effect of heating water in a gallon metal can, sealing it, and then letting it cool. And it collapsed quickly. Then Jamie and Adam did the same to a 55-gallon metal drum. Structurally more sound, it look quite a bit longer, but it too collapsed, taking more than 15 minutes.

To better prepare for the main event, Adam and Jamie reset the 55-gallon drum experiment to take data, measuring the temperature, pressure, and time to collapse. Heating the water to nearly 200º F, the pressure dropped 16 inches and took 8 minutes for the collapse. Then they set up another 55-gallon drum, this time using steam as they would in the rail tanker. The temperature rose to 203º F, the pressure dropped 17.5 inches, and it took 16 minutes for the collapse.

The MYTHBUSTERS crew had been working with drums. To scale as closely as possible to the real event, Adam and Jamie built a scale model of an actual tanker – minus bulkheads – and ran another test. It took only 7 minutes at an 11-inch drop of pressure for the tank to collapse, attributable to the weaker construction Jamie surmised.

Finally, everything was ready for the real test. Using a remote two-and-a-half-mile track of rail in Oregon, the myth and one of the biggest production efforts in MYTHBUSTERS history was on.

Thermometers and pressure gauges wired into the tanker, Adam, Jamie, and crew used a huge portable industrial steam cleaner to clean the inside of the tanker, bringing the interior temperature to 209º F. Adam, suited in a heat-resistant suit, climbed onto the car and sealed the tanker and then rushed back to the safety bunker to watch. The local fire department turned on a hose of cold water to simulate rain, and the suspenseful countdown to implosion began.

After an hour and an amazing pressure drop of 27 inches – to a nearly perfect vacuum – the tanker failed to collapse. In their eyes, the MYTHBUSTERS crew had performed a flawless experiment but didn’t get the same results as in the original story. But they wouldn’t settle for the results.

Perhaps the tanker in the original story had been damaged or corroded, reasoned Adam and Jamie. So they ordered a corroded tanker for another attempt at the myth. This time they used an industrial vacuum pump to get the same pressure differential in a fraction of the time, but after an hour the results were the same: no collapse!

When they have tried all reasonable results to replicate the original myth and have failed, you know the MYTHBUSTERS: Try to replicate the results. Adam and Jamie brought in a crane and dropped a hefty chunk of concrete on top of the corroded tanker, denting the top. Then they vacuum pumped the tanker again.

This time, after 10 minutes and a drop in pressure of 23 inches, the tank collapsed — flattened like an elephant had stepped on a soda can. “I’ve never seen anything quite like that,” said Jamie in wonder, “something that sturdy collapsing like that.” Adam agreed: “It was beautiful!”

Of course, they couldn’t reproduce the original results so…

As a member of the Boomer generation, the first generation to grow up with television, Alan Eggleston has always been fascinated with broadcast entertainment. He even studied it in college and worked in television before becoming a writer and editor. To this day, he is enchanted with dramas and sitcoms and enthralled watching sci-fi and science programs aired by the major networks as well as the cable providers. TV has come a long way, baby, and he loves sharing his passion with our readers. You can follow him on Twitter @a_copywriter