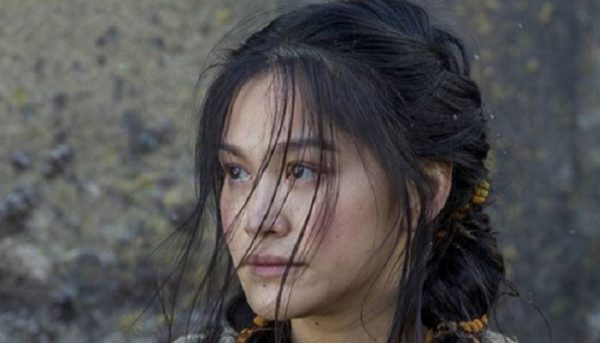 King Ragnar on History’s VIKINGS is in a very precarious position at the beginning of Season 4. He’s still hurting from his Paris “excursion” that ended the third season. When someone like him is vulnerable, people take notice. They may even start circling, ready to pounce and take over should he meet his maker.

So Ragnar’s in a lonely place. His brother’s off in Paris. His son’s bending over backwards trying to prove himself worthy a warrior and successor. His ex faces her own challenges in Hedeby. He has no time for his current wife. And, well, his best friend has gone to that great big Valhalla in the sky. RIP, Athelstan.

One distraction headed his way comes in the form of Yidu, a new arrival in Kattegat. THE TV ADDICT finds out what’s what with this slave woman in our exclusive interview with the Vancouver-based actress who plays her, Dianne Doan (ONCE UPON A TIME, Disney Channel’s DESCENDANTS). “It’s such an incredible season and I think that fans are really going to be happy with what happens,” she teases.

Doan introduces us to Yidu, analyzes her character’s relationship with Ragnar and she talks about filming in Ireland.

THE TV ADDICT: What is Yidu’s story?

DIANNE DOAN: From what you learn in the first couple episodes…and you’ll learn more about her background and her history more so throughout season four. But she comes on pretty early in the season and she’s captured on the Red Sea and brought to Paris where the Vikings kind of kidnap them back to Kattegat and she’s sold as a slave to the royal family so Queen Aslaug purchases me as a slave. And right off the bat there is this sense of mystery and interest just because she is so different from the people of Kattegat, like visually. And so that sparks some curiosity in Ragnar who’s known to be curious and continually learn. He wants to know my background, where I come from, who rules it, my religious views and then it kind of takes off from there.

TVA: I was going to ask what you think Yidu represents for Ragnar and why he takes a liking to her. So it’s because she’s so different from everybody else.

Yeah and I think that there’s a sense of power within her. I mean, she comes on as a slave. But within the first couple of episodes, she does challenge that position. Even though she’s a slave she stands up and she talks to a King. And so there’s that element of where she comes from for her to be able to do that.

TVA: What do you enjoy most about playing her?

I’ve never been a part of a series before so there was that aspect and at the same time it was this…the production was so collaborative that right off the bat, I was allowed to take risks and explore. Working with Travis [Fimmel, Ragnar] was more than I could have asked for. He’s such a talented actor. And he really pushed me — and the directors as well — out of my comfort zone and to really take this character and bring it to life the way that hopefully Michael [Hirst, VIKINGS creator] envisioned. It was really great.

TVA: This show features really strong depictions of women. They become earls, queens, warriors — what are your thoughts on that and how does Yidu fit into that?

What I think is interesting is the women on the show they do get a chance to be earls or queens or shield maidens. I think that it was exciting that Michael was kind of going towards the route of bringing on another ethnicity on the show and the fact that I kind of challenge that notion of being a strong, empowered woman as a slave, I thought that was really unique to play.

TVA: What are you most excited for VIKINGS fans to see about Season 4 and your character?

I’m just excited for them to see the work. I mean, I posted some behind the scenes pictures when the news got out that I was on the Season 4. I was just shocked about how vocal the fan base is. I knew it from the cast telling me about Comic-Con. But I didn’t realize how excited the fans were. So, for me, the main thing was just how they take my character. I know it’s such a different route from the typical VIKINGS storyline. So I’m just curious, are they gonna accept Yidu, are they going to accept the relationship that Yidu and Ragnar develop. I’m just really excited to hear what they think.

TVA: That might be tough. Because people still love Ragnar and Lagertha. And they haven’t been together for a long time.

I know. That’s a tough one. They’re not letting go of that.

TVA: Talk about filming in Ireland. What was that experience like?

Ireland is unbelievable. I mean, the country itself is so beautiful. And I do truly believe that it’s its own character on the show. I think the production takes full advantage of what they have. They really utilize the landscaping. And just the sets that they build are so big and from what I worked with on set, I dealt with very little CGI that I could see at least. So everything is very real, it’s realistic. I mean, I’m there in the setting. I didn’t have to work with green screen or anything. It was beautiful.

TVA: So the sets really helped you get into character?

Absolutely. We’re in Luggala, where Kattegat is. And then any sets they build on the soundstage will be full buildings. The Great Hall is actually a Great Hall. It’s not just a soundstage. Or like half the set. Everything is built to the nines over there.

TVA: You were a part of Disney Channel’s DESCENDANTS, right? Can you talk about that?

From the get go, everyone hopes their movie is going to be a big hit. But I felt that Disney did a really good job at marketing and making sure that it came to the right demographic. I got the chance to work with [famed producer, director, choreographer] Kenny Ortega. And that was a dream come true. I was a dancer before I was an actor and so to work with such a creative genius that he is. It was amazing. The fan base for that is the completely opposite end of the spectrum to VIKINGS. I think 12.5 million viewers tuned into the premiere to an 8 – 10 demographic. That to me was insane. I think what really appealed was that it was the children of the heritage characters. But you also got a glimpse of the adult or the older versions of the heritage characters, if you will. It was just an all around fun family film that really took off.

The fourth season of VIKINGS premieres tonight at 10/9c on HISTORY.