Suit up, diehard DC Comics fans.  DC’s LEGENDS OF TOMORROW crashes into Star City in 2046 in a version of their own futures in which they never were successful at stopping Vandal Savage (guest star Casper Crump).

Imagine the ramifications of what happens to the future if the Legends never catch Savage…Star City is in shambles.

Overrun by criminals and with a different landscape (like the “Palmer Technologies” building sporting the “Smoak” logo), the destruction of Sara’s hometown leads her to believe that Oliver/Green Arrow (guest star Stephen Amell) failed to “save his city.”

When Sara (Caity Lotz) and the team finally locates Green Arrow, GA is the one-armed, goatee-sporting version of the archer featured in Frank Miller’s “The Dark Knight Returns.”

Putting whipped cream on the sundae; Deathstroke is on the scene, as well!  While it may be or may not be Manu Bennett’s Slade Wilson, tonight’s Deathstroke is thought to be some form of “Wilson.”

Since the Legends have changed the past on a couple of occasions, this episode in the future gives Deathstroke an opportunity to appear without upsetting his extraction from the DC Television Universe and his rumored appearance in the feature film SUICIDE SQUAD.

This version of the future is not set in stone, so if producers have developed a clever way to send more Deathstroke the audience’s way, they deserve a great bottle of champagne.

For those who have not had enough excitement yet to geek out, also on the canvas in 2046 is Connor Hawke (guest star Joseph David-Jones).

The DC Print and Animated Universes depict Connor as the mixed race son of Oliver and Sandra “Moonday” Hawke.  Since William on ARROW definitely is not mixed race and his mom is named Samantha, it does not seem as though this Connor and that William are the same.

Perhaps the ripple in time affected Oliver’s liaisons and Connor is his son.  Perhaps the writers are doing a take on the animated series, BATMAN BEYOND, an older Oliver is training his replacement (Connor).   (In BATMAN BEYOND, an aging Bruce Wayne trains Terry McGinnis to be the new Batman.)

The audience will not have to be invested in the print and animated history of these characters tonight, while those who do may spot a few cool Easter Eggs.

With apologies to “Olicity” fans, perhaps one of these future adventures sees Green Arrow married to Black Canary as they were in the comics.

Granted, Felicity on ARROW and Felicity in print were miles apart and “print Felicity” only was a minor character.  Canary was the standout above all of Ollie’s many women and GA/BC in DC is A-OK 4me.

“Current day Oliver” could use a little of THAT Canary telling him to “suck it up, buttercup” and get him out of his own headspace.

All that being said, tonight’s episode, “Star City 2046,” should be a rip-roaring extravaganza full of infinite (and sometimes dreadful) possibilities, chocked so full of crime that Snart (Wentworth Miller) and Mick (Dominic Purcell) may not even stand out in the crowd.

One of those aforementioned Easter Eggs…Amell as the now one-armed archer sporting a Van Dyck in live action.  With rumors of his death exaggerated, he has been trying to hold the city by himself, despite being an archer with only one arm.

DC’s LEGENDS OF TOMORROW airs tonight at 8pm on The CW in the U.S. and on CTV in Canada at 8:30pm. 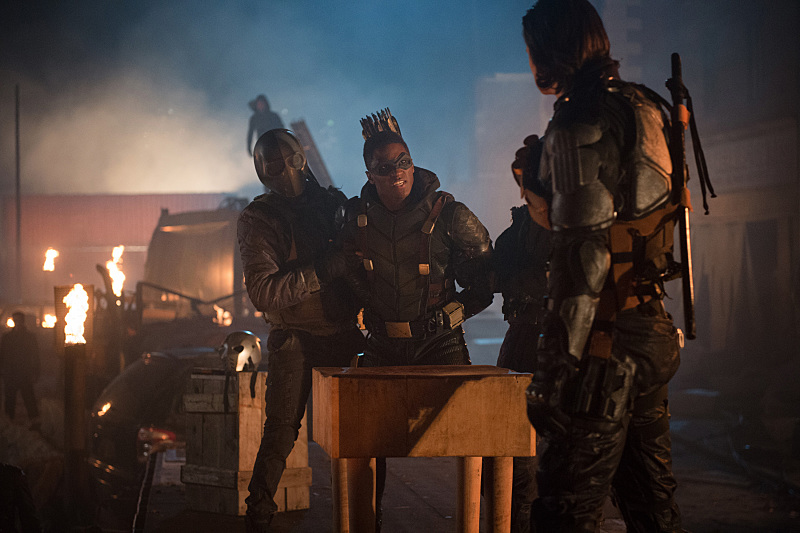