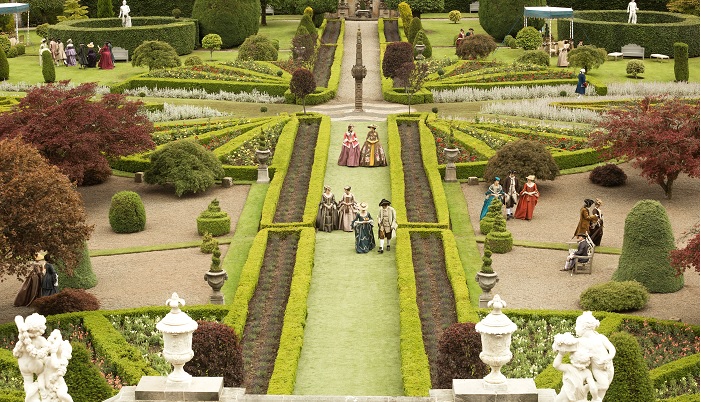 Besides the main cast in France, there are a few more familiar and new faces we’ll see in season 2, including:

Fergus. Fergus is a young French pickpocket who was raised in a brother. Prone to mischief, he is also wise beyond his years. “Equally adept at picking pockets as he is at handing out compliments, this precocious youth is fiercely loyal to the Frasers and would gladly lay down his life to protect them.”

Master Raymond. As a kindly apothecary, Master Raymond is a “mysterious healer with a great deal of knowledge regarding secret matters, both political and occult. Though generally viewed with suspicion by his contemporaries, Master Raymond forms a special bond with Claire.”

Alexander Randall. Despite the fact that they look alike, Alex possesses none of his older brother’s brutality. “A curate and secretary for the Duke of Sandringham, Alex is gentle, loving and kind.”

Dougal MacKenzie. Dougal is a skilled warrior who is the the War Chieftain of Clan MacKenzie. “Though his older brother Colum is the ruling Laird, Dougal covets the position for himself. Courageous on the battlefield and feared by many, Dougal’s judgment can also be clouded by ego and his fanatical devotion to the Jacobite cause. He will stop at nothing to restore a Stuart King to the throne.”

Colum MacKenzie. Colum is the Laird of the MacKenzie clan, Jamie’s maternal uncle and brother to Dougal. “Colum suffers from what is known in the 20th century as Toulouse-Lautrec Syndrome, a degenerative disease that renders his legs immobile at times, and fills his days with a great amount of pain. Unable to rule by brawn, he must rely on guile and intellect to lead his clan. Not surprisingly, there is a quiet sadness about him, as he must depend on his brother Dougal to be his enforcer. But above all, he is insightful and stern; a strong leader who secretly fears for the future of his clan and its leadership.”

Angus Mohr. A member of Clan MacKenzie, Abgus is a hard drinker who is always searching for a drink or a woman. “Mocking and playful, Angus is also loyal to the bone, a good friend to Rupert, a fearless follower of Dougal, and an enthusiastic supporter of the Jacobite cause.”

Rupert MacKenzie. Rupert is a goofy and lovable member of Clan MacKenzie and is also Jamie’s second cousin. He’s “the Hardy to Angus’ Laurel. A devoted and loyal follower of Dougal MacKenzie, Rupert will always step up to a fight and proudly joins the Jacobite cause.”

Jenny Fraser Murray. Jenny is Jamie’s older sister. “Stubborn and quick-tempered, Jenny is also smart, experienced and skilled, running Lallybroch (the Fraser ancestral home) when Jamie is away, with her husband, Ian Murray. From a young age Jenny learned the importance of family, and will stop at nothing to protect her own.”

Duke of Sandringham. “The Duke is about as opulent and flamboyant as they come in the 18th century. A cunning political player, we are never certain of the Duke’s true loyalties or intentions.”

Lord Lovat. Lovat is Jamie’s estrange paternal grandfather who “was known as ‘the Old Fox’ for his conniving, self-serving nature. Despite having four wives himself, he cut Brian, Jamie’s father, out of his life when he did not approve of his choice of bride. Lord Lovat manipulates affairs according to his own selfish will.”

Brianna Randall. Brianna is a beautiful redheaded young lady and is also the daughter of Claire and Jamie. “Strong-minded and intelligent beyond her years (traits inherited from both her mother and father), Brianna has a distinctly scholastic mindset, with a healthy dose of American strength, having been born and bred in Boston under the watchful eye of historian Frank Randall.”

Roger Wakefield. Roger is kindhearted, intelligent and charming and he’s also the grown-up version of Reverend Wakefield’s adopted son that we met in season 1. “After his parents died in World War II, Roger was raised by the Reverend (with help from his housekeeper, Mrs. Graham) and is a proud Scot through and through. Now a professor at Oxford, Roger has a keen interest in history, and all the secrets and insight it presents.”