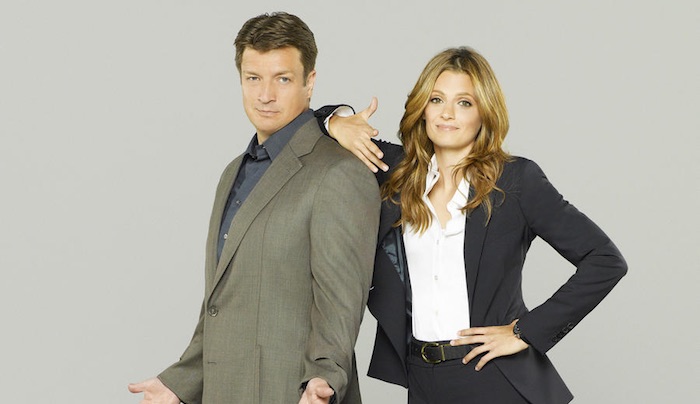 After eight long seasons, CASTLE ended last night with a less than satisfying conclusion. After a rocky season 8 and Stana Katic’s dramatic exit a few weeks ago, the ABC show was ultimately cancelled after much debate about whether it would return for a new season without Katic or not. Last night’s season finale ended in such a sour note for fans across the world, that we had to sit down and get the words out about it.

Just as we did when the news of Katic leaving the CASTLE hit the media, I got a couple of friends together who, like me, had once been reviewers and big fans of the show. So in a collaborative effort, Shana Lieberman from Gossip and Gab, Lissete Lanuza from Fangirlish and I discussed what happened in the finale, Caskett and our wishful thinking for the show, now that we have gotten to the bitter end.

Here at TheTVAddict, we are discussing Castle and Beckett’s relationship and our distaste for tha cliché happy ending we were treated to. If you head over to Gossip and Gab, Shana is hosting our thoughts about the finale in general, and Lizzie is hosting our wishful thinking at Fangirlish.

Luciana Mangas: This was one of the few TV relationships that I was ever really, really invested in. When I first started watching CASTLE, the chemistry between Stana Katic and Nathan Fillion seemed to jump off screen and it was such a joy to watch them banter back and forth. I tuned in because the premise sounded fun, but I stayed because their relationship – romantic or otherwise – was one of the best things I had seen in a while.

It was so much fun to watch them and cheer them on, but with time, it started to get frustrating that they never got together when they clearly had deep feelings for one another. And then they finally got together at the end of season 4 and we could not have been more overjoyed then. Season 5 was alright because they were still finding their footing as a couple and things had changed, so we understood why sometimes their scenes together felt a little strained.

Then we had the season 5 finale and I can’t even begin to describe what went through my mind then. I was ecstatic when Castle proposed to her, don’t get me wrong. But if you go back now and watch it again, the look on Castle’s face is nothing like someone who is happy about asking the love of his life to marry him. Sure, we can say it was because of the situation then – and that’s what I told myself when it happened – but if we’re really honest about it, that was the beginning of the end.

We will never know what actually happened behind the scenes, but looking back, their scenes together started to get more and more strained and forced. Katic gave it her best, because she tried to make it look natural and organic and she tried so hard to find that chemistry they always had when they were bantering. In fact, she was the one that made it bearable to watch whenever they had a love scene, because Fillion always looked like an awkward teenager who didn’t know where to put his hands.

Sigh. Castle and Beckett together had so much potential, but TPTB didn’t know what to do with them once they got together. Of course, some people will cry it was the so called “Moonlighting curse”, but it totally wasn’t. It was lazy writing that got progressively worse – particularly after Marlowe stepped out. And then they started to separate them more and more, culminating in this godforsaken season 8. By then, the rumors that things were not going well behind the scenes were flying rampant, and it was impossible not to wonder if that was why they decided to put Beckett and Castle in their respective corners and barely interact at all.

I didn’t watch most of season 8, but I know they were apart for a good portion of it. And then when Beckett finally came clean, they still barely had any scenes together. I mean, what gives? For a relationship that was so celebrated and loved by the fans, they were doing a disservice to the audience by keeping them apart. Add that to the complete reversal of Beckett’s character, and we have a show that became unbearable to watch.

Caskett was a relationship that I once upon a time was really invested in. But it died a gruesome death at the hand of the writers and producers when they decided to split them up. Not even that ridiculous “happy ending” last night could fix what has forever been tarnished for us. I am going to remember the earlier seasons fondly, but god knows I just want to forget that the relationship I saw in past two seasons ever happened.

Shana Lieberman: The beautiful confessions of love from Castle and Beckett were wasted on secondary characters, even though this was the last time we’d ever hear them. (Whether the series had continued or not, Caskett was through…) How did we get here? Someone tell me how we got to the point where Stana Katic and Nathan Fillion, two leads who once had such great chemistry which drove every dramatically charged moment on this show, couldn’t even be face-to-face to have their characters express their love for one another for the last time.

Seriously. How. How is that even a thing that’s allowed? If, for whatever reason, Katic and Fillion couldn’t play those emotional words opposite one another, they shouldn’t have been written at all. Kind of like none of the awkward attempts at “romance” shouldn’t have been bothered with since at least season six, given the unbalanced commitment — Katic threw herself into every scene, while Fillion often looked bored and incapable of knowing where to put his hands — and lack of sizzle.

Remember when every season finale involved some sort of tense, emotional conflict between these two perfect opposites? The “Caskett” in the Castle series finale was nothing more than an empty recitation of words, whereas those obligatory Beckett apartment fights of the past were full of heart.

But “at least Caskett is intact,” right? Wrong.

The more I hear, “oh, I’m happy with this because they didn’t kill Beckett,” the more enraged I become. Because they did kill Beckett, just not physically. They destroyed everything that made Kate Beckett a hero — save for maybe some badass ninja moves, that beautifully expressive face, and the hairporn.

Beckett became, over the course of Castle’s eighth season and, arguably during the seventh season as well, nothing more than a prop. There was a clear effort to remove her as the hero of the story; considering she was nothing more than a baby factory and muse in the messily tacked on “happy ending,” it looks like the Mission Destroy Beckett was a wild success. The audio from the ending moments of “Flowers For Your Grave” was meant as fan service, but, at least for this fan, was a slap in the face. The same goes for the line ripped from the series’ original opening credits…And “always,” which lost its meaning the second Beckett walked out on Castle to “protect” him, was the nastiest betrayal of them all.

This was not Caskett. This was Castle, with Beckett as a sidekick.

One of my least favorite Castle episodes — at least before this trainwreck of a season — was the sixth season’s time traveler episode, “Time Will Tell.” The man from the future didn’t present a logical conclusion to the Caskett story, at least as far as I was concerned, so for this ending to essentially prove that ridiculous fabrication true was yet another disappointment. But at least that episode was written by its original dynamic duo of Andrew Marlowe and Terri Miller, whereas this…was not.

Lissete Zanura: Oh, Caskett. You could have been everything. Instead, you were… I don’t even know what you were at the end. Were you a thing? Did you exist? Or were you merely wishful thinking and good memories?

I’m going to go with the later.

Years ago I fell in love with two characters who complimented each other, with the so-obvious-it-was-almost-tangible chemistry of the two leads and with a story of a man who found, not a muse, or an inspiration, but a partner in life. And yet, the funny thing is, for all that this show was named “Castle,” for me, it was always about Kate Beckett.

We saw her through his eyes, yes, but it was her we were invested in. She was the one with the tragic background, she was the damaged one who had to find a way to live and love. She was not just the muse, or the baby-making-machine, she was a hero in her own right.

At least for the first seven seasons or so.

Rumors of off-screen strife aside, I can’t even comprehend how we’re now discussing what didn’t work about Caskett. Because the truth is, in the beginning, almost everything worked. Each of them brought something to the relationship, and each of them took something from it. Simply put, the Richard Castle and the Kate Beckett we knew and loved were better because of each other.

Did it feel like that at the end, or did they mostly feel like a burden the other had to put up with?

Was that really what happened? I don’t want to speculate. But I do want to say that having our two leads proclaiming their love for each other to everyone but each other was the cherry on top of this whole mess of a season. Not even the tacked-on, horrible clichéd ending could bring back my good will, mostly because even the words in that were wrong.

In the end, we lost Caskett way before this season finale, and the last tiny crumbs they threw our way in no way, shape or form make up for the mess they made of what was meant to be a timeless love story. Remember the word fan-service? Everyone likes to use it. Well, this, this was FAN-SERVICE, and of the worst kind. The kind we would have rather done without.

For our thoughts on the finale and our wishful thinking, visit Gossip and Gab and Fangirlish, respectively.

20-something Brazilian journalist. Crazy about TV. Currently in love with DC and Marvel superheroes, that tattooed lady from NBC, clone conspiracies and dystopian futures. You can reach her at @lucianamangas on Twitter and talk about how much you love TV as well. Or puppies. Puppies are cool too.