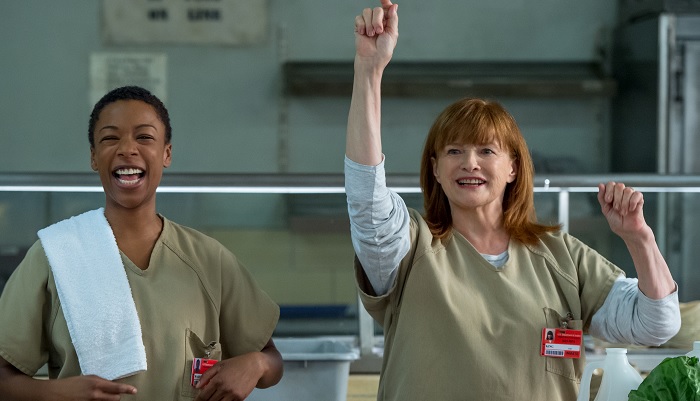 A new season of ORANGE IS THE NEW BLACK is coming to the Canadian streaming service in June, as is the new Netflix series A VERY SECRET SERVICE. In addition, there’s a lot of new Netflix original animated shows for kids, including LEGO FRIENDS and ALL HAIL KING JULIEN.

Check out the full list below of what’s coming to (and leaving) Netflix Canada in June.

Related: What’s coming to Netflix US in June?

(Dis)Honesty: The Truth About Lies (Dan Ariely)
Professor Dan Ariely examines the truth behind lying: why we do it when we do it and how society suffers from whoppers and little white lies alike.

72 Cutest Animals
This series examines the nature of cuteness and how adorability helps some animal species to survive and thrive in a variety of environments.

72 Dangerous Places
Get up close and personal with avalanches, fiery volcanoes and other natural cataclysm, and learn why some choose to live in their destructive path.

Bob Ross: Beauty Is Everywhere – Collection 1
“The Joy of Painting” host Bob Ross brings his signature wet-on-wet style to a bevy of bucolic landscape paintings celebrating the beauty of nature.

Coraline (Dakota Fanning, Teri Hatcher, John Hodgman)
Curious young Coraline unlocks a door in her family’s home and is transported to a universe that strangely resembles her own — only better.

Good Will Hunting (Robin Williams, Matt Damon, Ben Affleck)
When professors discover that an aimless janitor is also a math genius, a therapist helps the young man confront the demons that are holding him back.

He Named Me Malala
This documentary tells the story of a teenage Pakistani girl shot for her advocacy of women’s education, her survival, and her continued efforts.

Hitman: Agent 47 (Rupert Friend, Hannah Ware, Zachary Quinto)
A genetically engineered assassin dubbed Agent 47 teams with the daughter of a missing scientist to track him down and find the secrets of 47’s past.

Luther – Season 4 (Idris Elba, Warren Brown, Dermot Crowley)
A dedicated urban detective tries to keep a grip on his personal life while dealing with the psychological factors underlying the crimes he solves.

Maze Runner: The Scorch Trials (Dylan O’Brien, Kaya Scodelario, Thomas Brodie-Sangster)
Teens immune to the zombie virus that has overtaken the planet make their way through desert terrain pursued by undead and a sinister organization.

Need for Speed (Aaron Paul, Imogen Poots, Dominic Cooper)
Fresh out of the jail, a street racer puts the pedal to the metal in a wild cross-country event to take down the man who framed him for manslaughter.

Octonauts – Season 1 (Keith Wickham, Jo Wyatt, Ross Breen)
An intrepid band of explorers roam the oceans in search of adventure and fun. Led by a valiant polar bear and a daredevil kitten, these eight talented critters are always ready to embark on an exciting new mission.

Pokémon the Movie: Hoopa and the Clash of Ages
When Ash, Pikachu, and their friends visit a desert city by the sea, they meet the Mythical Pokémon Hoopa, who has the ability to summon things-including people and Pokémon-through its magic ring.

That Awkward Moment (Zac Efron, Miles Teller, Michael B. Jordan)
When Jason’s relationship crumbles, his two best friends decide to show their solidarity by staying single until he’s ready to get back in the game.

The Fear of 13
After 20 years on Death Row, self-educated inmate Nick petitions the court to be executed, then tells his twisting, turning tale of despair and hope.

The Martian (Matt Damon, Jessica Chastain, Michael Peña)
Abandoned on the surface of Mars, an astronaut presumed dead after a dust storm struggles to survive the hostile planet and send a message home.

Underdogs (Gabriel Almirón, Federico Cecere, Ezequiel Cipols)
A young man named Amadeo sets off on an unexpected adventure with the players of his beloved Foosball game.

Hibana: Spark – Season 1 – Netflix Original (Kento Hayashi, Kazuki Namioka, Mugi Kadowaki)
A dramatic series about friendship and conflict between two comedians who search for meaning in life and comedy. Based on the prize-winning book.

Rock the Kasbah (Bill Murray, Kate Hudson, Zooey Deschanel)
When a has-been music producer gets stuck in Afghanistan he discovers a girl with a wonderful voice, then has to find a way to market her talents.

Free Birds (Owen Wilson, Woody Harrelson, Amy Poehler)
When two adversarial turkeys find a time machine, they take a wild trip to the past to try to take turkey off the traditional Thanksgiving menu.

Paraíso (Andrés Almeida, Daniela Rincón, Camila Selser)
An overweight couple has been together since childhood, but will their bond break when they move to the city and one joins a weight loss group?

The Good Dinosaur (Raymond Ochoa, Jack Bright, Sam Elliott)
In a world where dinosaurs and humans co-exist, a runt dinosaur and a Neanderthal boy form a unique friendship and share an unforgettable adventure.

Le Bon Sinosaure (version canadienne-francaise)
In a world where dinosaurs and humans co-exist, a runt dinosaur and a Neanderthal boy form a unique friendship and share an unforgettable adventure.

Out of Africa (Meryl Streep, Robert Redford, Klaus Maria Brandauer)
A Denmark native shares a marriage of convenience with a womanizing baron. But when they move to Nairobi, she falls for a free-spirited hunter.

LEGO Friends: The Power of Friendship – Season 2 – Netflix Original
Five best friends face adventures side by side in their hometown. Zany antics, love and missteps are better with friends!

Steve Jobs: The Man in the Machine
This unflinching documentary examines the exacting work environment created by Apple’s mercurial CEO and his cultlike influence on technology culture.

Tammy (Melissa McCarthy, Susan Sarandon, Kathy Bates)
Pushed to the limit after losing her job and discovering her husband’s been cheating on her, Tammy agrees to flee town with her alcoholic grandmother.

Black Mirror: White Christmas (Rory Kinnear, Lindsay Duncan, Daniel Kaluuya)
This sci-fi anthology series in the vein of “The Twilight Zone” reflects on the darker side of technology and human nature.

Dark Matter – Season 1 (Marc Bendavid, Melissa O’Neil, Anthony Lemke)
After waking up aboard a derelict spaceship with no memories, the crew of the Raza investigates the mystery of their identities and destination.

Escape from Planet Earth (Rob Corddry, Brendan Fraser, Sarah Jessica Parker)
This all-ages animated comedy follows the adventures of astronaut Scorch Supernova, a hero of the blue aliens who has a vast appetite for adventure.

Night Owls (Adam Pally, Rosa Salazar, Rob Huebel)
After workaholic Kevin has a drunken one night stand with the beautiful train-wreck Madeline, he’s horrified to discover that she’s actually his boss’ jilted ex-mistress. When she takes a bottle of sleeping pills, Kevin is forced to keep her awake… and over the course of the night the two begin to fall for each other.

Think Like A Man Too (Kevin Hart, Gabrielle Union, Wendi McLendon-Covey)
All the couples are back for a wedding in Las Vegas, but plans for a romantic weekend go awry when their various misadventures get them into some compromising situations that threaten to derail the big event.

Orange is the New Black – Netflix Original (Taylor Schilling, Kate Mulgrew, Laura Prepon)
A privileged New Yorker ends up in a women’s prison when a past crime catch up with her in this Emmy series from the creator of “Weeds.”

I Am Thor
Jon Mikl Thor was a bodybuilding, steel bending, brick smashing rock star in the 70’s and 80’s whose theatrical band, Thor, never quite made it big. Years later he attempts a comeback that nearly kills him.

The Last Witch Hunter (Vin Diesel, Rose Leslie, Elijah Wood)
The last witch hunter is all that stands between humanity and the combined forces of the most terrifying witches in history.

Chicken Run (Mel Gibson, Julia Sawalha, Phil Daniels)
When a bird “flies” into a chicken farm, the fellow chickens see him as an opportunity to escape their evil owners.

Dragons: Race to the Edge – Season 3 – Netflix Original
From the creators of How to Train Your Dragon comes an all-new Netflix original series that takes Hiccup and Toothless to the edge of adventure.

The Fundamentals of Caring – Netflix Original (Paul Rudd, Craig Roberts, Selena Gomez)
In this inspirational buddy comedy, a young shut-in and his caregiver take a road trip in search of landmarks, but end up finding hope and friendship.

Trumbo (Bryan Cranston, Diane Lane, Helen Mirren)
In 1947, Dalton Trumbo was Hollywood’s top screenwriter, until he and other artists were jailed and blacklisted for their political beliefs.

Between – Season 1 (Jesse Carere, Ryan Allen, Justin Kelly)
When every 22-year-old or older person in a small town dies, the rest of them strive to survive.

Muppets Most Wanted (Ricky Gervais, Ty Burrell, Tina Fey)
In the middle of their global tour, the Muppets inadvertently get mixed up in a perilous drama involving a gang of international jewel thieves.

A Very Secret Service – Season 1 – Netflix Original
At the height of the Cold War in 1960, André Merlaux joins the French Secret Service and contends with enemies both foreign and bureaucratic.

How to Train Your Dragon 2