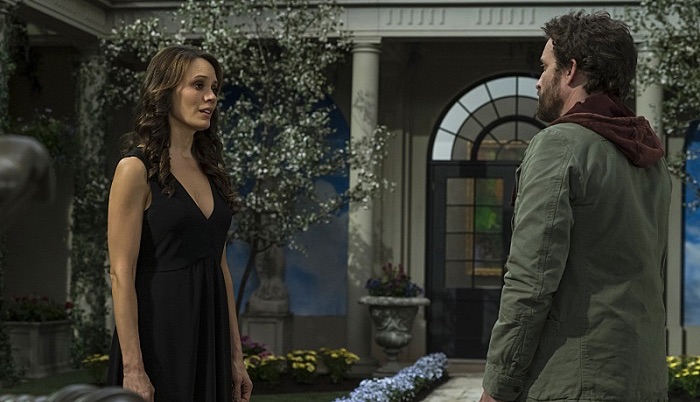 The ultimate showdown between light and dark took place on the season finale of SUPERNATURAL, but was Dean Winchester (bound to the Darkness) a casualty of that battle?

We picked up the season finale of SUPERNATURAL exactly where the last episode left off. While Sam went to help an unconscious God, Dean tentatively approached what he thought was an unconscious Lucifer. But if you were paying attention in the last episode you know that Amara killed Lucifer. At the very least, she ripped him from Cas’s body. But God is weakened and our rag-tag team of heroes has a new problem: the sun is dying. Amara is seemingly going for the slow-but-steady route of killing the planet and everyone on it.

Fortunately, God still had some mojo, so he zapped the group back to the bunker and Dean immediately broke out the beer. He recognized the futility in trying to fix the sun and he’s pretty much done with everything unless Sam can give him something tangible to fight.

Meanwhile, over in England (a.k.a. Vancouver doubling for England), we met Lady Antonia (Toni) Bevel. After watching a news report about the sun’s strange behavior, she received a call with the 411 about what was really going down. While she headed down to a secret study in her basement, we saw there was a wall full of information about the brothers. Soon after, she kissed her sleeping son goodbye and headed off.

Rowena, meanwhile, was cozying up to God back in the bunker, making him some tea and the pair are bonding over horrible kids (Rowena’s sucking up to God was a high point of the episode). Sam was not happy that everyone was being so fatalistic about their situation, but he was determined that they figure out a plan. As Cas and Dean headed out on a beer run (where Dean told Cas that he’s been a great friend to the brothers), Sam called them back to the homestead. His new plan? He wants to kill Amara. But how?

God had the solution: the Darkness can be killed with light. Specifically, the force of 10,000 suns set to supernova. Since suns were not readily available, what could they use instead? Souls. Rowena offered to use souls to build a bomb. So Cas headed to heaven to ask the angels for some of their souls and Crowley agreed to go back to Hell to see what was left down there. And the brothers? They decided to round up some ghosts.

Sam and Dean headed to an old sanitarium that was very, very haunted and got to killing themselves some ghosts. Thanks to a crystal from Rowena, they managed to trap all the souls. But someone was spying on them….Billie the reaper.

Back at the bunker, Cas announced that the angels were refusing to help because they know God is dying. Instead, they’re sealing up heaven and preparing to die with dignity. Crowley also turned up nothing. Enter Billie, who was quickly brought up to speed on the plan. And she agreed to help them. After all, if you want souls, you just have to call a reaper. And gather up souls Billie definitely did — a couple hundred thousand, to be exact. She then bade the boys goodbye and Cas said they needed to bring the bomb to Amara via someone she trusted. Specifically…Dean. But Dean couldn’t just drop a bomb at Amara’s feet and run…he had to *be* the bomb. Once Rowena placed the souls inside Dean the clock was running, because he only had an hour to accomplish his task before becoming a walking, ticking time bomb.

While our heroes and villains built their soul bomb, Amara was hanging out in a beautiful park — possibly just waiting patiently for the world to die. An older lady stopped by to chat up the Darkness and Amara seemed…conflicted. Particularly when the woman started talking about the importance of family. “Even when you hate them, you still love them,” the lady said. And from the look on Amara’s face it appears that she agreed.

The Winchesters, God, Crowley and Cas all headed to Mary’s grave and Sam expressed concern about this crazy plan. But Dean insisted this was the only way. As Dean said goodbye to his friends and brother, he gave out a laundry list for his funeral. And then he was spirited away to Amara’s pretty park. Dean told her he was there to give himself to her as he slowly approached her. But she immediately knew about the bomb he was carrying. And yet, she wasn’t afraid, because he had never been able to hurt her. She also revealed that the sun was dying because God was dying — and that she too would cease to exist when God died and the universe died along with him.

At the same time, Crowley, Cas, Sam, God and Rowena headed to a bar to ride out the possible end. God continued to deteriorate, while Amara confessed to Dean that she just wanted God to pay. But Dean Winchester knows a thing or two about revenge and he explained that revenge was never the way to go. Family is the way to go and it’s the one thing that really matters. Back at the bar, Sam told God he just needed to hang on a little bit longer and then Chuck disappeared.

It turned out that Amara had summoned Chuck for a talk about family. She confessed how angry she was at God when he turned his attention from her and created the world, but she also doesn’t believe revenge will make her happy. “What you’ve made, it’s beautiful,” she told him. And then she took his hand and healed her brother, thus returning the power to the sun. Back at the bar, everyone believed that Dean had succeeded in the plan and was gone.

Meanwhile, God took back the souls from Dean, and he and Amara headed off for a family meeting. But before she disappeared, Amara thanked Dean for giving her what she really wanted. And in return, she would do the same for him.

Sam and Cas arrived back at the bunker and had a pretty terrible introduction to Lady Toni Bevel. She immediately banished Cas and then told Sam that the Men of Letters was taking him in. He’s caused too much trouble for too long. He resisted, naturally, and then….she shot him? Maybe. We don’t know because his body was off-side when her gun went off.

And then, in the cliffhanger moment, Dean was trying to find his way back to civilization when he heard a woman’s voice calling out for help. It was Mary Winchester. In the flesh.

This definitely wasn’t the best finale SUPERNATURAL has ever had. In fact, it was a bit of a let-down. Overall, there seemed to be a lack of urgency and strong emotion in this episode. Had this been a finale back in earlier seasons we would have seen stronger protestations from Sam about Dean’s plan, despite whatever he said about respecting his brother’s decisions. But perhaps the weakest aspect of it was Amara’s about-face. After a season full of anger and hatred we’re just supposed to believe she truly loves her brother? That may be true, but it doesn’t seem earned. Her rage at the world would have played out better all season if we had seen her having conflicting feelings about her brother before now. Family forms such a cornerstone of the SUPERNATURAL universe, but Amara was played as a straight villain for so long it’s hard to understand her motivations now. Regardless, the fact that the season ended without much of a fight also seems like a let-down. I don’t need an apocalypse to close out every season, but God and Amara just drifting off into the ether while holding hands seems….anti-climatic. After all that tension and build-up, where was the hard-won resolution?

Regardless, the end of another season of SUPERNATURAL is also a time to look ahead. The show finally seems ready to turn attention back to the Men of Letters arc with the introduction of Toni, which is a good thing. This is an arc that has a lot of untapped potential and hasn’t been a focus for the show in a long time. Naturally, I’m not even the least bit worried that Sam Winchester is dead, but watching him and Dean go head-to-head with old school Men of Letters members could be interesting next season. Of course, the biggest surprise/question is Mary. Is she alive again? Will she be a recurring character on the show? Or has Amara just given Dean a chance to see his mother in the flesh one more time? We’ve got more questions than answers right now, but that’s always the way with this show.

SUPERNATURAL will return this fall on The CW.