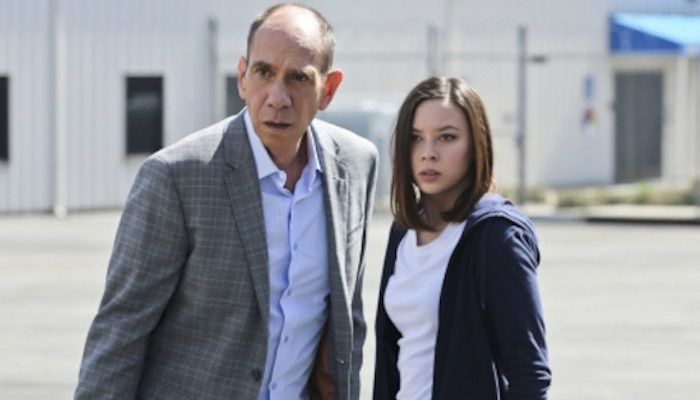 It’s too quiet on the entertainment landscape. One of the fabulous voices of our industry was silenced Thursday following a bout with throat cancer. It’s especially sad because that horrible disease could affect the basso profondo of a man with a beautiful voice, Miguel Ferrer.

Many of you who read my column know that I had great admiration and respect for Miguel. I had the honor of working with him several times, and unlike his often gruff, imposing characters, I always found him to be charming, thoughtful and very funny. And talented. Very talented.

I was thrilled when his latest series, NCIS: LOS ANGELES, gave Miguel a chance to show off his softer side in an episode titled, “Granger, O.,” (above with TV daughter Malese Jow). For the episode preview, I listed some things I had learned about Miguel over the years.

An accomplished drummer and fellow Batman fan, Ferrer, 61, is being praised by many who worked with him in his dozens of films and TV shows over the years.

R. Scott Gemmill, showrunner of NCIS: LOS ANGELES issued a statement, “Today, NCIS: LOS ANGELES lost a beloved family member. Miguel was a man of tremendous talent who had a powerful dramatic presence on screen, a wicked sense of humor, and a huge heart. Our thoughts go out to his wife Lori, his sons, and his entire family. He will be greatly missed.”