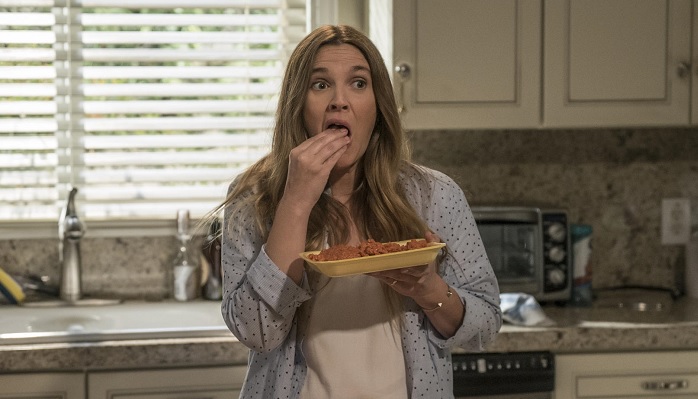 The new Netflix series SANTA CLARITA DIET will be available on the Canadian streaming service in February 2017, as will weekly episodes of RIVERDALE and season 4 of THE 100. On the movie side, you can see the original Netflix film DAVID BRENT: LIFE ON THE ROAD starring Ricky Gervais.

Check out the full list below of what’s coming to (and leaving) Netflix Canada in January 2017.

February 1
17 Again
Cast: Zac Efron, Leslie Mann, Matthew Perry
Nearing a midlife crisis, thirty-something Mike wishes for a “do-over” — and that’s exactly what he gets when he wakes up to find he’s 17 again.

50/50
Cast: Joseph Gordon-Levitt, Seth Rogen, Anna Kendrick
An otherwise healthy twentysomething has a comically early midlife crisis when he gets slapped with a cancer diagnosis and a 50-50 chance of survival.

Ashley Madison: Sex, Lies, and Cyber Attacks
Cast: Christopher Russell
The film details the hacking of the Ashley Madison “extramarital affairs” website and the fallout from the public release of their users’ emails.

Batman vs. Robin
Cast: Jason O’Mara, Stuart Allan, Sean Maher
Batman’s rebellious son (the new Robin) is recruited by a secret society trying to take control of Gotham. But he’ll have to get past his father.

Black Nativity
Cast: Forest Whitaker, Angela Bassett, Tyrese Gibson
Langston Hughes’s play is the basis for this uplifting drama about a teenager whose single mother sends him to spend Christmas with his grandparents.

Butter
Cast: Jennifer Garner, Ty Burrell, Olivia Wilde
When a gifted butter sculptor announces his retirement, his ambitious wife sees her hopes for future fame — and the presidency — melt away.

Don’t Be a Menace to South Central While Drinking Your Juice in the Hood
Cast: Shawn Wayans, Marlon Wayans, Tracey Cherelle Jones
In this goofy send-up of the gritty urban movies of the early 1990s, Ashtray moves to South Central L.A. and falls in with his gang-banging cousin.

Dreamland
Cast: Johnny Simmons, Amy Landecker, Jason Schwartzman
Broke pianist Monty longs to open a piano bar. A steamy affair with a rich older women could pave the way, but is he willing to risk all that matters?

Escape Plan
Cast: Sylvester Stallone, Arnold Schwarzenegger, Jim Caviezel
Framed and thrown into an escape-proof prison that he designed himself, structural security expert Ray must use all his know-how to break out.

Hector and the Search for Happiness
Cast: Simon Pegg, Toni Collette, Rosamund Pike
Unfulfilled by his career as a psychiatrist, Hector leaves everything behind and travels around the world in search of true happiness.

Masha’s Spooky Stories – Season 1 Episodes 5 – 6
Little Masha shares tales of common childhood fears like ghosts and monsters. She playfully explains why these creatures are nothing to worry about.

Mother’s Day
Cast: Jennifer Aniston, Jason Sudeikis, Julia Roberts
The trials and tribulations of several Atlanta moms (and one clueless widower dad) make it a Mother’s Day to remember in this ensemble comedy.

ParaNorman
Cast: Kodi Smit-McPhee, Tucker Albrizzi, Anna Kendrick
When an army of zombies invades a small town, it’s up to an odd local boy with a knack for communicating with the dead to save the day.

Semi-Pro
Cast: Will Ferrell, Woody Harrelson, André Benjamin
Jackie is the cocky owner and coach of the Flint Michigan Tropics — the team with the worst record in the renegade American Basketball Association.

The Constant Gardener
Cast: Ralph Fiennes, Rachel Weisz, Danny Huston
Justin Quayle, a member of the British High Commission based in Africa, begins his own international investigation when his wife is murdered.

The Hurt Business
Cast: Tito Ortiz, Rashad Evans, Ronda Rousey
From the producers of ‘Bowling for Columbine’, ‘Fahrenheit 9/11’ and ‘Generation Iron’ comes ‘The Hurt Business’ which examines the rise of mixed martial arts fighting through the eyes of today’s top stars.

The World’s End
Cast: Simon Pegg, Nick Frost, Paddy Considine
A group of middle-aged friends attempts a marathon pub crawl, hoping to make it to the World’s End pub — a name that proves rather literal.

The 100 – Season 4
Cast: Eliza Taylor, Paige Turco, Thomas McDonell
A century after Earth was devastated by a nuclear apocalypse, 100 space station residents are sent to the planet to determine whether it’s habitable.

Riverdale – Season 1 – Netflix Original – New Episodes Weekly
Cast: K.J. Apa, Lili Reinhart, Cole Sprouse
Archie’s got an edge. Veronica’s hiding her past. Riverdale is a little darker and a lot more interesting than it was in the days of Archie Comics.

February 7
Michael Bolton’s Big, Sexy Valentine’s Day Special – Netflix Original
Santa’s buried in a backlog of toys, and he needs 75,000 new babies by Christmas. Only one man can get the world in the mood for love: Michael Bolton.

February 8
Into the Woods
Cast: Meryl Streep, Emily Blunt, James Corden
In the woods filled with magic and fairytale characters, a baker and his wife set out to end the curse put on them by their neighbour, a spiteful witch.

Skiptrace
Cast: Jackie Chan, Johnny Knoxville, Bingbing Fan
A detective from Hong Kong teams up with an American gambler to battle against a notorious Chinese criminal.

February 10
Abstract: The Art of Design – Netflix Original
From Executive Producer Morgan Neville, Abstract, a Netflix original docu-series, takes you beyond blueprints and computers into the art and science of design, showcasing great designers from every discipline whose work shapes our world. Go inside the minds of the world’s greatest designers.

Cyborg 009: Call of Justice – Season 1 – Netflix Original
Years after taking up normal lives incognito, the cyborgs are forced to fight again when the superhuman Blessed appear with a plan for humanity.

David Brent: Life on the Road – Netflix Original
Cast: Ricky Gervais, Doc Brown, Tom Basden
David Brent: Life on the Road sees a documentary crew catching up with the idiosyncratic David Brent from the BBC2’s mockumentary ‘The Office.’ When audiences were first introduced to Brent, the self-proclaimed “Friend first, boss second. Probably an entertainer third” dreamed of becoming a rock superstar. Twelve years on, Brent is now a traveling salesman chasing the dream with his band, ‘Foregone Conclusion’. Assembling a group of session musicians who are just in it for the money, and a talented rapper Dom (Ben Bailey Smith) in an attempt to gain street cred, Brent cashes in his pension and takes unpaid leave in pursuit of his dream and one last shot at fame and fortune.

February 12
The Land Before Time XIV: Journey of the Brave
Cast: Reba McEntire, Damon Wayans Jr., Felix Avitia
When Littlefoot’s father doesn’t return from a trip, the brave dinosaur and his pals set off on a rescue mission through strange new lands.

February 13
The Woman in Black 2: Angel of Death
Cast: Phoebe Fox, Helen McCrory, Jeremy Irvine
During World War II, a group of London schoolchildren are evacuated to a dilapidated house, where they unwittingly reawaken a vicious spirit.

February 14
Girlfriend’s Day – Netflix Original
Cast: Bob Odenkirk, Amber Tamblyn, Tucker Smallwood
When he’s caught up in a deadly conspiracy, an unemployed greeting card writer must create the perfect card for a new holiday to save his skin.

White Nights – Season 1 – Netflix Original
A cold hearted heiress, a man from her past and an ambitious new hire in her company all become entangled on a battleground for money and power.

A History of Violence
Cast: Viggo Mortensen, Maria Bello, Ed Harris
After foiling a robbery, a small-town diner owner becomes a hero in the media but soon attracts the attention of a mobster who thinks he’s someone else.

Drive
Cast: Ryan Gosling, Carey Mulligan, Bryan Cranston
A Hollywood stuntman and getaway driver is lured from his isolated life by a lovely neighbour — until her violent husband is released from prison.

Ella Enchanted
Cast: Anne Hathaway, Hugh Dancy, Cary Elwes
Burdened with the “gift” of obedience by a fairy godmother, Ella searches for a way to lift the curse that prevents her from pursuing her dreams.

He’s Just Not That Into You
Cast: Ben Affleck, Jennifer Aniston, Drew Barrymore
Love-hungry Baltimoreans deal with the pitfalls of human interactions in this big-screen adaptation of Greg Behrendt’s best-selling book.

Just Friends
Cast: Ryan Reynolds, Amy Smart, Anna Faris
Years after high school, a once-portly nice guy comes home for the holidays and reunites with a former crush he still has feelings for.

Step Up: All In
Cast: Ryan Guzman, Briana Evigan, Alyson Stoner
Continuing the Step Up street dance series, competitors gather in Las Vegas for the ultimate dance-off, including champions from the previous films.

February 16
Disney’s The BFG
Cast: Mark Rylance, Ruby Barnhill, Bill Hader
A girl named Sophie encounters the Big Friendly Giant who, despite his intimidating appearance, turns out to be a kind-hearted soul who is considered an outcast by the other giants because, unlike them, he refuses to eat children.

February 21
Trevor Noah: Afraid Of The Dark – Netflix Original
The “Daily Show” host ponders the perils of naming your own country, why 007 can’t be black and how traffic lights make New Yorkers invincible.

February 22
The Impossible
Cast: Naomi Watts, Ewan McGregor, Tom Holland
The story of a tourist family in Thailand caught in the destruction and chaotic aftermath of the 2004 Indian Ocean tsunami.

February 24
I Don’t Feel at Home In This World Anymore – Netflix Original
Cast: Melanie Lynsky, Elijah Wood, Jane Levy
Depressed Ruth gets a new lease on life when she and a neighbour track down burglars who robbed her. But they’re soon dangerously out of their depth.

Legend Quest – Season 1 – Netflix Original
Cast: Ashley Cowie, Kinga Philipps, Jeremy Dellova
Leo lives in the past, but he travels across time on a magic ship with his ghost and monster friends on their mission to defeat a mystical enemy.

The Sound of Your Heart – Season 1 – Netflix Original
Based on Korea’s longest-running webtoon series, this comedy follows the ridiculous daily lives of a cartoonist, his girlfriend and his subpar family.

VeggieTales in the City – Season 1 – Netflix Original
Larry, Bob and their Veggie pals expand their horizons, presenting colorful, inspiring tales from the city as well as their own backyards.

February 28
Badlands, Texas – Season 1
Cast: Ronny Dodson, Ronda Haberer, Michael Kasper
The small town of Terlingua, Texas is a little known oasis on the Rio Grande River where eccentric residents trade modern comforts for a unique brand of freedom. But the price of their freedom proves high when a brutal crime threatens to tear their town apart. This true-crime docu-series delves into the eccentric world of Terlingua as its citizens struggle to reconcile the killing of a dear friend and fight to hold the town together as it grapples with change.

Your Worst Nightmare – Season 1
Cast: Eric Abraham, Clark Sarullo, Kevin Todde Coughlin
Each episode of this investigative series spotlights a terrifying true crime and reveals twists and turns too shocking to be fiction.

February 2
This is Where I Leave You

February 7
A Most Violent Year