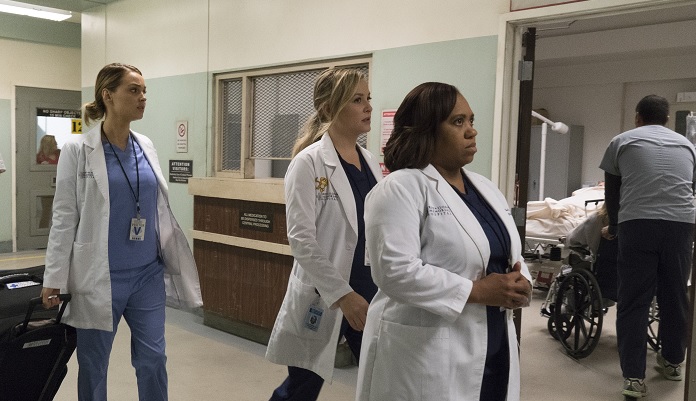 To say it’s been a long winter hiatus would be an understatement as tonight’s all-new episode of GREY’S ANATOMY takes the doctors of Grey-Sloan Memorial through unprecedented situations. The most common of them being associated with prison — Alex and the possibility that he may very well end up behind bars, and Jo, Bailey, and Arizona visiting a prison to treat a violent patient.

In the sneak peek below, we see Bailey, who is clearly not happy to be attending to a patient in a prison — let alone one who’s pregnant and 16-years old. Arizona, while trying to stay positive, ultimately agrees with Bailey’s thoughts. Jo, on the other hand, is more on the defensive end because, unbeknownst to them, she’s been in difficult situations before where violence was a means to her survival. Here’s to hoping Jo’s compassion and personal connection doesn’t end up backfiring on her.

Meanwhile, we’re all at the edge of our seats, anxiously waiting to know if Alex turned himself in and are curious to know how the outcome of Maggie rounding-up all the doctors in favor of Richard will play out with Dr. Eliza Minnick coming in to take his position — especially with Bailey.

Will Jo let her personal feelings interfere with her work?