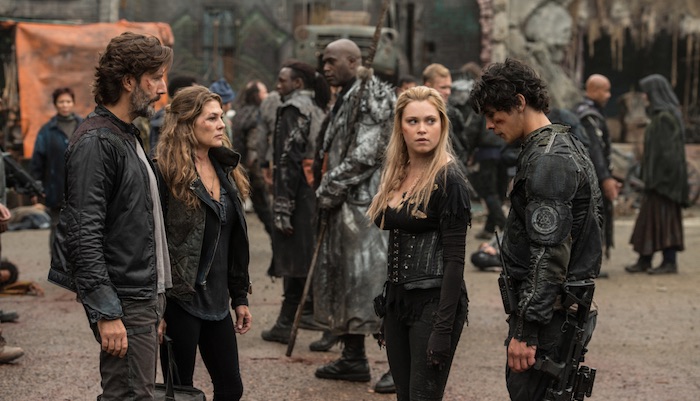 Clarke made a decision at the end of season 3 of THE 100 that saved people…and may have doomed them at the same time. In choosing to end ALIE and destroy the City of Light, Clarke seems to have condemned humanity to death by radiation as the world’s nuclear plants melt down. As always, Clarke is ready to do what it takes to survive, but season 4 presents the arkers (a.k.a. Skaikru) with a new challenge unlike any they have faced before.

During a visit to the set of THE 100 in Vancouver, Eliza Taylor (Clarke), Bob Morley (Bellamy) and Richard Harmon (Murphy) spoke to journalists and what’s next for the arkers.

The Unseen Enemy. The enemy can’t be seen in season 4 of THE 100, but its effects will absolutely be felt. “This whole season’s mostly based around how we’re going to deal with fighting an enemy that we can’t go to war with. So it’s going to prove very interesting,” Taylor teased. Morley hinted that the impending apocalypse “weighs in quite a lot. It’s a huge factor throughout this season. It’s this impending doom and we all have to figure out how to address that and whether you decide to find a way to get through it or find solutions to live through it or whether you start making a bucket list and just decide to let it wash over you in a literal sense. There’s that existential dilemma of whether we deserve to survive or whether should we live the rest of our lives hedonistically with whatever we have left. That’s definitely the clock that is ticking throughout the season.”

Spreading the Truth. When will Clarke start telling people about what she knows? Some people will be informed quickly, but telling the rest of the world will be done cautiously, Taylor told us. “It’s something that she has to be really careful about because obviously she’s just taken all these people out of a beautiful city that they were happy [in] and brought them back into a world that’s about to end. So she has to be very careful about how she goes about telling people without starting a riot, basically.” However, you will not see Clarke acting like the lone wolf that she was for most of last season. Once she starts telling people, she will be more open to working with others again: “I think you will see more of her relying on her friends and family, which is good because (a) Eliza missed working with them and (b) it’s kind of like the old crew being back together again. It feels like season 1 again, which is awesome.”

Related: What’s in store for the Grounders in season 4 of THE 100?

Clarke and Bellamy…Together Again. In particular, expect to see Clarke and Bellamy working side-by-side: “They’re a real team and I really like the way their storyline is going,” Taylor said “there’s a lot of mutual respect and they’re sharing the leadership role, so that’s cool.” Be cautious, however, because Morley ominously said “they’re obviously going to go on their own journeys and they’re going to have their own issues that they have to deal with and demons they have to fight. But for the most part in the beginning there is that unity again. But everything that’s peaceful is short-lived on this show. Just wait and see again.”

The Sins of the Past. Bellamy made some bad choices last season and the guilt he feels will not go away quietly, even as he works to atone in season 4. Morley said that “all the decisions he’s made since season one always hang over his head. So [so what happened in season 3 is] just another addition to the amount of guilt and remorse that he has. He’s got a lot of weight on his shoulders and he’s carrying that around but has to find a way to be useful again and to be helpful to those around him that he loves. It’s going to be dealt with, we’re constantly dealing with that stuff. The culling of the 500, Mount Weather. It doesn’t just go away. That’s the great thing about this show, I get to carry around those demons forever. That’s definitely prevalent this season.”

Who is Working Together? In addition to Clarke and Bellamy reuniting, “you’ll see a lot of Bellamy and Kane’s relationship which is really great for me,” Morley said.” I love working with [Henry Ian Cusick]. We have a lot of fun. He’s like, I guess, adopted me as his son or vice versa, maybe I’m the father figure between the two of us. There’s a lot of that stuff, Kane and Bellamy. Obviously the relationship with Octavia is always something that has to be addressed and we address constantly that ever-evolving relationship….There’s a return of the adventure squad of the younger kids as well which is a lot of fun. This season I’ve got to spread myself around a lot and work with a lot of different people which is nice.” Morley also said that “this show loves to pair groups of characters together that you wouldn’t necessarily expect. Ticking clock or not you always see these couplings and these groups that go out that you wouldn’t necessarily imagine being friendly or aggressive or whatever it is, regardless. Obviously the ticking clock [of the apocalypse] is a catalyst to putting these groups together. There’s a whole heap of different groups that you won’t usually see and I think the writing team really likes to explore putting characters together that you wouldn’t expect together.”

Related: Watch an extended preview for season 4 of THE 100

Trying to Get Along. Murphy has generally been the guy to look out for number 1, but that may change a bit in season 4. “I think that a big theme of this season is seeing everyone’s true colors when all the chips are on the table,” Harmon said. “This [new apocalypse] is coming. It doesn’t really look like there’s any way we’re going to be able to get around it. It’s probably going to kill us all. What do your favorite characters do with that information? Do some of them actually try to fight against it with almost no hope of survival or do you give up and just enjoy your last couple weeks or months or however long it is on Earth? Speaking for Murphy specifically, I think we’ve seen him be a survivor this entire time. There’s been pretty bad times for him and times when he’s had nothing really to live for and he’s survived anyway just because he doesn’t want to die. I think I can say speaking for him that’s not going to change anytime soon. The guy cares and especially now that he has something to live for in Emori. I think he’s trying to get along with the group a little bit better. I think he’s, now more than ever, finding his place within the 100 team.”

A Stable Relationship? Clarke and Bellamy both lost their significant others last season, but Murphy is still trying to hang on tightly to his, according to Harmon: “We’re going to see a relationship [between Murphy and Emori] that is strained through the adversity of knowing the world is coming to an end. I think that’s a hell of thing to put any relationship through, but I know those two really care about each other. They’re two outsiders that have finally become insiders through each other. It’s a really beautiful thing and I’d like to take a second to acknowledge how amazing Luisa D’Oliveira is who plays Emori. One of my favorite teammates I’ve ever had on set. We just work really well together. I think that shows a lot on screen in the chemistry that we have and I’m really excited for fans to see where we’re going with that.”