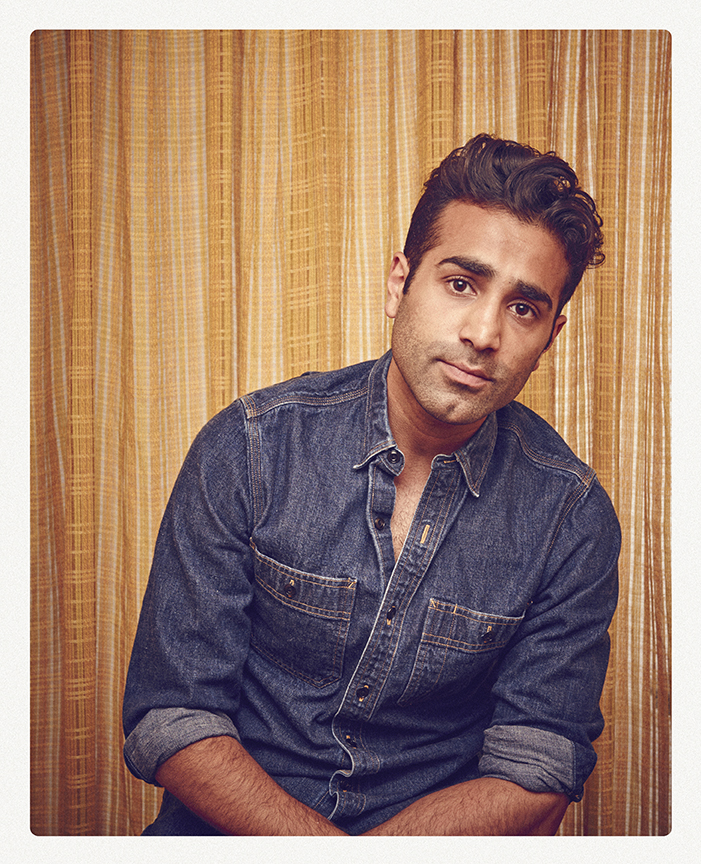 Al Mukadam is a self proclaimed ham’n’egger – a working actor, who broke into the biz at the tender age of 11. Now, at age 31, he’s banked an impressive twenty years of experience with early credits that include Nickelodeon’s Radio Free Roscoe, Degrassi: TNG and Disney Channel’s Get A Clue where he starred alongside Lindsay Lohan and Little Rascal’s Bug Hall. Recently he’s appeared in more mature roles like Oscar nominated John Madden’s feature film Miss Sloane where he shared the screen with the likes of Jessica Chastain, Mark Strong and Michael Stuhlbarg. Next up, Al can be seen in Canadian director, Mark Raso’s feature film Kodachrome, where he plays opposite Jason Sudeikis. We caught up with Al to discuss the past, present and what the future holds for this Canadian born rising star.

What made you want to get into acting at such an early age?
I guess I was an attention seeking class clown. I’m the youngest of three brothers in a very loud, very funny family – so I guess without knowing it, I was building character by just wanting to be heard and acknowledged. ‘Cause you’d get cut off or talked over pretty quickly if the story you were telling wasn’t funny or compelling.

You experienced success in the industry pretty early on. What can you attribute that to?
Luck. Timing. I don’t know. When I was a kid, it was fun. There was no pressure or expectations. It was professional make believe. There was a comfort and ease in its simplicity. Nowadays I have to keep myself from overthinking, doubting myself or being insecure – back then, it was so simple and natural. I’m constantly striving to get back to that place.

Starting off as a child actor, did you find it tough to transition into more adult roles?
Yeah that wasn’t always easy. And we all know that can be rough for some kids. But I guess I got lucky for the most part. Puberty didn’t rock me too hard. It was a gentle transition. But I mean, yeah, there was a period of time where I didn’t find work for a few years during my early twenties. At the time it was awful, but in retrospect I think it was necessary. Proper self reflection where you had to ask yourself some serious questions like do you really want to keep doing this? Do you still love it? Are you going to take it seriously? And I think those are just important questions to ask yourself throughout your life and career. Like circling back to check yourself – before you wreck yourself, you know?

Did you ever think of quitting acting?
Oh sure! Look it’s not an easy racket and has an abundance of disappointments and frustrations. But I always came back to the fact that I actually have no other discernible skills, talents or crafts whatsoever. So it’s basically this or…destitution. Also, I love it.

But it’s worked out. What do you attribute your unwavering commitment to acting to?
Okay, I appreciate the fancy way you put that, but no, early on, I just kind of decided that this is what I want to do for the rest of my life. Sounds corny, I know, but it’s true. There’s going to be good times and bad times and that’s okay. I’m a ham’n’egger. Like Rocky, you just keep going, no matter what. God, I love that movie. Definitely worth a rewatch. And if you’ve never seen the first Rocky, do yourself a favor and take that masterpiece in.

You’ve done comedic roles, with Spun Out and dramatic roles, like Miss Sloane – which do you prefer and which is more challenging?
Yeah, there seems to be that age old debate, doesn’t there? Which is harder, comedy or drama…Jeez, I don’t know. They’re different. They’re opposite sides of the same coin. Different sides of yourself, different ways to tell a story. I genuinely enjoy them both, it’s just working different muscles. Either way, I’m just trying get to a place of sincerity and truth in a performance. Because they both suffer if you’re not approaching it openly and honestly.

Working on Miss Sloane, you worked with some heavy hitters – John Madden, Jessica Chastain, Mark Strong and Michael Stuhlbarg, what was that experience like?
Unforgettable. Incredible. Inspiring. I can go on and on about that experience. Definitely a career highlight thus far, for sure. It was a big learning experience as well.

What was the most important lesson you learned on that set?
Ah..Just to be in it. In the moment. I mean, all the folks you just mentioned have such esteemed and accomplished careers and I admire their bodies of work and the skill and talent and hard work they put into what they do – but man, they’re also just having fun out there. There was levity and fun and jokes and a good natured vibe always on that set. I feel like you stay young when you love what you do. Not that there weren’t challenges to get through while shooting scenes for that movie, but they were all genuinely loving the process and wanting to perfect it and go deeper and I loved that. They were all just in it. I feel like the mark of a true professional is someone who makes something very difficult look effortless and graceful. And that’s something I saw in spades on that set.

Next up, people can look forward to seeing you act opposite Jason Sudeikis in Kodachrome, that comes out later this year. How was it working with him?
That guy’s the best! So smart and so sharp and obviously so funny. But he’s so quick. Like something would happen and he’d have three jokes flying at you about it right away. I really had to be on my toes with his brand of really smart, fast humor. And he’d do something slightly different every take without telling you, which I loved, because it was fresh and after a few takes, I started throwing new things back at him. So we were really playing with one another and it kept it really exciting. Love that guy.

Finally, as a veteran of the biz, what advice would you give to a young person wanting to get into acting.
Oh jeez. That’s your final question? That’s a tough one. I’m reticent to ever offer up any advice, simply because I’ve had a lifetime of people telling me what I ought to be doing and how to do it without they themselves ever having done it – do you know what I mean?… I remember watching Inside the Actor’s Studio with Don Cheadle, and they asked him that same question and his reply was amazing, he said – don’t do it… And then he followed up with – and if you actually listened to me, then you’re not cut out for this business. Something like that, I’m paraphrasing. His point being that, it’s tough and it sucks a lot of the time, but you have to really want it and you have to stick with it. He said it way better, look it up on YouTube, it’s worth it. I guess I’ve got my own take on that, which is…if you want something, go get it. And don’t listen to anybody, including me and the rest of this sentence.