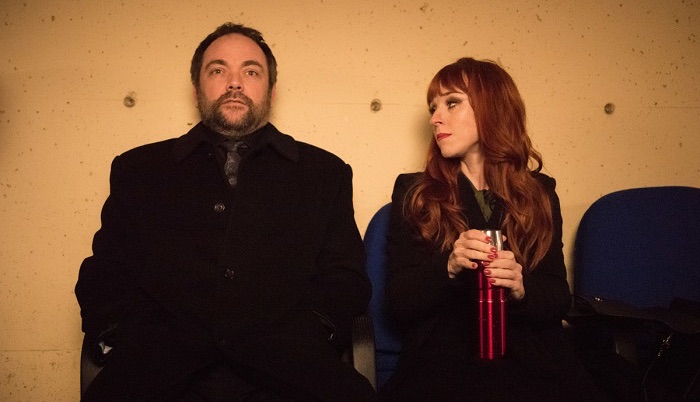 We begin this week’s SUPERNATURAL in Massachusetts, with the mysterious death of a woman.

Back at the bunker, the Winchesters recap that Kelly Kline is still in the wind, so Sam suggests they investigate a case (involving the death of a teacher at a museum). Was a witch to blame? Dean suggests they call up Mary for some help. But she’s busy using some newfangled technology to kill monsters, courtesy of her new BFFs, the British Men of Letters. And when Dean calls, she declares herself “too tired” to help the boys.

Meanwhile, Crowley has Lucifer (in Nick’s old meat suit) locked up and we learn how Crowley captured Lucifer after the others thought they had sent him back to Hell for good. He also explains that they found poor old Nick years before so that Lucifer could continue to inhabit his old meat suit (and Mark Pellegrino could continue to play the role).

As the brothers head out to investigate the case they find more victims online and Dean seems suspicious about Mary’s excuse. The boys also soon realize that the case is connected to the Star, the ship Gavin (Crowley’s son) was supposed to die on.

Back in Hell, Lucifer and Crowley are having a chat about Kelly and Lucifer insists that his baby is still alive (which Crowley didn’t know). When called, Crowley refuses to help the brothers find Gavin and expresses anger that they let Lucifer’s baby live.

The boys turn to Rowena instead for help and they soon greet Gavin at a bus station. They introduce Gavin to his grandmother, Rowena, and she seems genuinely pleased to meet him. They head to the museum and Gavin recognizes a locket that he was going to give to his girlfriend, Fiona, before they were going to board the ship. Sam and Dean quickly conclude that the killer ghost must be Fiona, but the locket is missing from the exhibit. They try to track it down and discover that the ghost gave it to someone at a nearby all-girl’s boarding school.

All manner of ghostly things start happening at the school and two teachers are attacked. The Winchesters rush in — all hero-like — and save the day, at least momentarily. They’re joined by Gavin and Rowena and Gavin tries to talk to Fiona’s spirit (assuming it’s her). The ghost reveals herself and it is, indeed, Fiona. The pair discuss the night Gavin disappeared and she reveals how she became an angry spirit.

The Winchesters’ only solution is to send Gavin back in time so he can protect Fiona, prevent her from becoming an angry spirit, and die. Rowena is initially unhappy about this plan, but Gavin is fine with it. Crowley, however, pops by to say this is never going to happen. But Gavin is insistent and he had called Crowley to say goodbye. “He’s not like us, he believes in things. Let him do what he believes is right,” Rowena tells Crowley, just before she freezes Crowley so he can’t stop Gavin from leaving. Back at the bunker the boys prepare the spell to reunite Gavin and Fiona and soon Gavin is gone.

Throughout the episode we also see that angels are tracking Kelly and looking to kill her, but she’s got some help from one demon in particular: Dagon (a.k.a. Ramiel’s sister). After saving Kelly from the angels, Dagon takes a moment to educate her on the politics of Heaven and Hell and explains why the angels want her dead.

Elsewhere, Mary is hanging out with Mr. Ketch, who continues to be interested in the Winchester boys. But he tells her to “disengage from them a bit”. He tells her she’s weaker when she speaks to them, but when she’s hunting she’s strong.

As the boys realize that their plan worked, Mary stops by with burgers and beer and she makes a startling confession: she’s been working with the British Men of Letters. But Sam and Dean refuse her suggestion to work with the BMOL, so she begs them to hear her out.

Crowley confronts Rowena at the end of the episode, saying that what Rowena did wasn’t right because he believes she did it out of spite. Rowena insists that Gavin was a lovely boy and she cared for him in her own way, but the whole thing was really payback for Crowley making her kill Oskar to remove the Mark of Cain.

Throughout a montage we see Mary trying to convince her boys, Crowley brooding, Kelly accompanying Dagon to parts unknown, and Lucifer whispering for Dagon. Will Kelly’s baby daddy be reunited with her soon enough?

The next new episode of SUPERNATURAL will air on March 2 at 8:00 p.m. ET/PT on The CW. Watch a preview below.