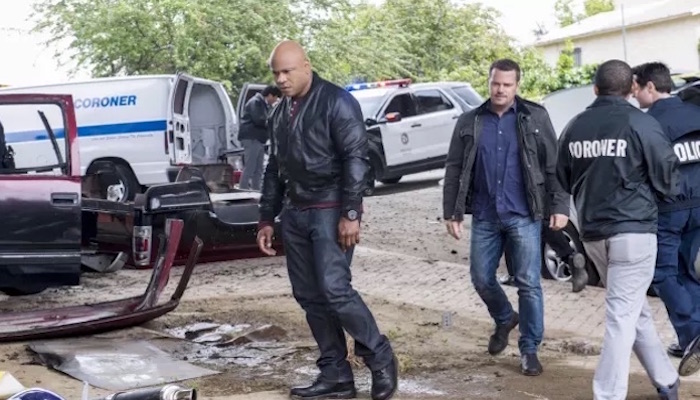 Every once in a while, there is an opportunity to watch a veteran cast bring a wealth of talent to the screen and show us just exactly how it’s supposed to be done.

That is the case tonight on NCIS: LOS ANGELES when last week’s “to be continued” storyline puts even more meat on its bones.

Just in case you missed last week, John M. Jackson’s character, Retired Admiral AJ Chegwidden, continued to integrate into the boatshed gang. Presumably a replacement for Miguel Ferrer’s Owen Granger, Jackson brings the easy skill of an actor with a lot of experience into a situation in which most of the cast has 8 years working together…a situation that often does not lend itself to incorporating a new player.

(Before I go on, a “thank you” to the producers for leaving Ferrer, who passed away earlier this year, in the credits. Hopefully, Owen Granger will be living happily ever after on a beach with an umbrella drink…or probably a Scotch.)

But back to AJ Chegwidden…in an inspired casting choice, NCIS: LOS ANGELES not only picked an experienced vet to fill the void, it reached back into the annals of NCIS history and plucked a character that was part of the mothership of the franchise…JAG.

Yes, for those of you graduating middle school this year, NCIS was not the original show in the mighty franchise. It was spun off from a series named JAG, about lawyers in the U.S. Navy’s Judge Advocate General’s office.

Jackson originated the Chegwidden role on JAG where he played the original Jethro (not Gibbs) for most of the series’ 8-year run. AJ, aka Albert Jethro, even reprised his role for an NCIS episode with the aforementioned Gibbs.

Now, NCIS: LOS ANGELES has chosen to incorporate AJ and Hetty (Linda Hunt) into a backstory in which Chegwidden was close with both Hetty and Granger during the Vietnam War in which he served as a Navy SEAL, so he should have some bonding opportunities with Sam (LL Cool J).

Both veterans of dozens of television shows and feature films, Remar is best known for SEX AND THE CITY and DEXTER. Lumbly, CHICAGO MED and ALIAS’s Marcus Dixon, and Remar are both staples in many Warner Bros. Animation series, and Lumbly and Ferrer split voiceover duties on J’onn J’onzz, The Martian Manhunter.

So, as we finish our six-degrees of acting talent, here are the credits for the rest of the NCIS: LOS ANGELES cast: Chris O’Donnell, Daniela Ruah, Eric Christian Olsen, Barrett Foa and Renée Felice Smith.