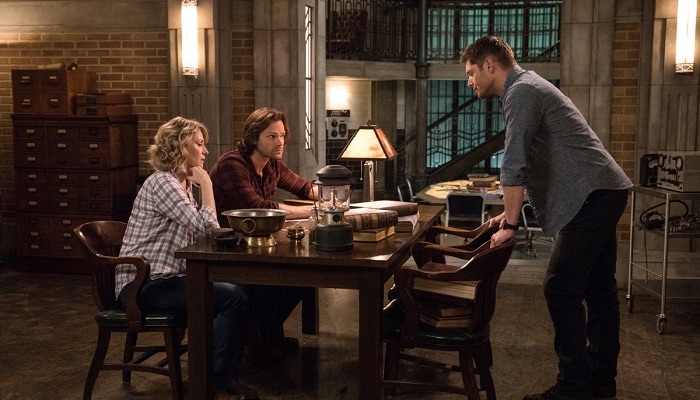 The Winchester brothers had to deal with a brainwashed mother, a murderous British Men of Letters (BMOL), and Lucifer and his possibly evil spawn in the season finale of SUPERNATURAL. Thankfully it was two hours long, which was plenty of time to deal with the multiple bad guys they had to vanquish.

But did they vanquish them? Read on to find out.

Before we get to the vanquishing, we have to deal with the aforementioned brainwashed Mary Winchester, who is slaughtering her fellow American hunters left and right and ready to take orders on who to kill next.

Back in the bunker, Toni manages to convince the brothers to keep her alive long enough to de-program Mary. But before that can happen they need to figure out a way out of the bunker. They get to work, searching through their various books to find a spell that could help. They managed to get the lights to flicker, but the first spell fizzled out and Toni announced that magic wouldn’t work. As the boys got to work trying to get through a concrete wall, the air started to go thin and Sam realized they probably wouldn’t get out. Enter the grenade launcher. After all, Dean’s been dying to use it.

Fortunately that worked and Dean managed to get out and reverse what Ketch had done to the bunker last week. They quickly headed to Jody’s house where Mary had attempted to kill her. Fortunately, Alex and Jody managed to knock Mary out. The boys ordered Toni to fix their mother, but Mary insisted there was nothing Toni could do — Mary’s programming was permanent.

While they tried to figure out what to do about their mother, Jody called in some reinforcements — the two American hunters who had killed Sam and Dean back in the season 5 episode “Dark Side of the Moon”. With a rousing speech, Sam managed to convince their little group that they should take the fight to the BMOL.

Dean opted to stay behind because he had injured his leg while using the grenade launcher. So he asked Toni to help him save Mary as Sam headed off with his merry band of hunters. Back in their bunker, Dean established a psychic link to Mary and found himself in the old Winchester house, along with young Dean and baby Sam. Mary was taking care of her boys, oblivious to the outside world and to Dean’s pleas to snap out of it.

“I hate you,” he told her bitterly. “You lied to me. I was a kid. You promised you’d keep me safe. And then you make a deal with Azazel.” He recounted how Azazel went to Sam’s room because of the deal Mary made and how their family suffered as a result of what she had done. “I hate you. And I love you,” Dean said. “You’re my mom and I understand because I have made deals to save the ones I love more than once. I forgive you. I forgive you for all of it. Everything. On the other side of this, we can start over, ok? You, me, Sam. We can get it right this time. But I need you to fight.”

That got through to her. Unfortunately, Ketch burst through the psychic bubble by killing Toni and attacking Dean, ripping him out of Mary’s head. Dean fought Ketch, but he was already injured and seemed to be losing. Enter Mary, who woke up and killed Ketch.

Meanwhile, Sam and his fellow hunters stormed the BMOL bunker, shooting their way inside. One by one they picked off the BMOL mercenaries. Hess managed to lock herself in a safe room, but Sam burst through. And back home in Britain, the big boys refused to help extract Hess. But Hess explained to Sam that Lucifer was back and they shouldn’t be so quick to kill her. After all, he might need the BMOL’s help.

Back at the bunker Mary apologized to Dean for her part in this mess. But Dean explained that everything she did had made them who they are — kickass hunters who save the world. Sam walked in just as Mary said she was worried he could never forgive her, leading to a family hug.

Seriously, a *family hug*. It was beautiful. I may have shed a tear.

And that was the end of part 1.

At the start of part 2 we see that Kelly and Cas have been hiding out in a cabin by a beautiful lake. Kelly was frantically trying to put the baby furniture together, while Cas was promising to raise the baby when Kelly died. Later, as Kelly and Cas returned home from some baby shopping we see Kelly start to have contractions and, somehow, a bit of her baby’s essence escapes and flitters through the air.

Back at the bunker, Sam brings Mary and Dean up to speed on the Lucifer situation and we get confirmation that Crowley wasn’t dead — he had just been hiding out in a rat. Fortunately he had found his old vessel and reanimates it. As Sam tries to call Rowena for help, he learns that Lucifer had killed her and then answered her phone. He insists the boys ccan’t kill him and now they can’t put him back in his cage with Rowena gone. The only possible solution they have is to keep Kelly and Cas moving so Lucifer can’t find them. Fortunately, the baby would bring some biblical plagues to herald its own birth, so all the boys had to do to find Cas and Kelly was follow the signs.

Cue Cas touching that piece of the baby’s essence outside the cabin, which instantly transports him to some mysterious place with a creature that attacks him. Fortunately he was saved by …

Well, we don’t know yet. Because he returns to Kelly before the figure’s identity is revealed.

Back at the bunker Crowley stops by for a chat and Dean is furious that Crowley had let Lucifer out. But Sam suggests he might be able to help them with a spell now that Rowena was dead. Crowley laments about how much he hats his job but offers his services. “Whenever there’s a world-ending crisis at hand, I know where to place my bets. It’s on you,” he tells the boys. And he offers to close the gates of Hell once they get rid of Lucifer this time. So the Winchesters continue to search for a lead and figure out where Cas and Kelly are hiding. As they head out Dean stabbs Crowley through the hand and tells him to stay where he is.

At the cabin Kelly tells Cas that the baby was coming and Cas recounts what he saw to Kelly when the nephilim showed him the future. “I saw a world without pain, war, hunger or want. I saw the world that this child, that your child, will create. Maybe it is a world without fear and without suffering and without hate. I saw paradise,” he tells her.

The Winchesters arrive at the cabin and Cas is shocked to hear that Lucifer is back. Dean tells Cas they have to get moving, but Kelly is already in labor. Sam goes to double-check the warding and sees the glowing portal (“a tear in space and time,” Cas says) in the backyard. It’s an alternate reality, he explains. The baby’s power is puncturing the fabric of the universe, but Sam just wants to know what’s on the other side. “You don’t want to know,” Cas warns. But Dean insists they need to know and so Cas takes them there.

They find themselves in the same dusty land that Cas was in. This alternate world was caught in a war between angels and demons and the few humans that remained were trapped in between them. But Cas insists the baby could close this door. “I have faith,” Cas says before Dean calls him a dumbass.

Then that mysterious figure returns and….it’s Bobby Singer! But he doesn’t know Sam and Dean because this a world where Sam and Dean had never been born and, thus, had never saved the world. As the brothers and Cas return to our reality Crowley shows up and insists he is the answer to their problems.

Sam and Dean prepare for the big showdown with Lucifer as Cas tries to reassure Kelly that everything will be fine. “Remember….paradise,” Cas tells her.

Sam, Dean and Cas head outside to confront Lucifer, who has arrived at the cabin. Sam tells Lucifer that God will stop him just like he did before, but Lucifer just laughs that off. Cas charges first, but easily gets swept aside, so Sam and Dean take off running and head to the alternate reality. Lucifer quickly follows and Dean confronts him with the angel killing bullets Alternate World Bobby had been carrying. Nearby, Crowley is setting up the spell to lock Lucifer away. He interrupts Lucifer beating Dean as the Winchesters head closer to the portal.

“I hate you, deeply, truly,” Crowley tells Lucifer, before taking his own life because a sacrifice was needed for his spell to work. Then Cas bursts through the portal and heads toward Lucifer. He manages to stab Lucifer, but it doesn’t seem to do much. As Lucifer and Cas head back to the right side of the portal Lucifer kills Cas and Mary starts to beat on Lucifer. But she and Lucifer fall into the portal just before it closes, trapping them in there.

Sam and Dean are heartbroken and Sam rushes inside as he sees a light coming from Kelly’s bedroom. He finds Kelly dead and then sees bloody footprints on the floor in the hallway.

Cue the creepy glowing eyes of the nephilim, who seems to be much larger than a baby.

Holy moly, the body count of this Supernatural finale. Is that it? Are Crowley and Castiel really dead? Will Mary ever make her way back to her own world? Is Lucifer gone for good?

We’ll have a long time before we find out.

SUPERNATURAL will return this fall for season 13. The show will also be doing an animated crossover episode with SCOOBY DOO next season.