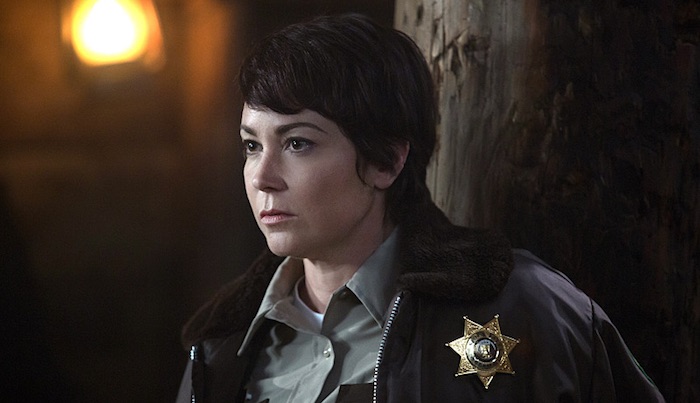 Here’s what you need to know about the show’s leading ladies.

Leading the group is Sioux Falls Sheriff Jody Mills (Kim Rhodes – Colony, Kings of Con), an associate of Bobby Singer, who has grown to be one of Sam and Dean Winchester’s most trusted friends and allies. A foster mother to Claire Novak, Alex Jones and new character Patience Turner, Jody’s greatest challenge will be to prepare them for the battles ahead.

Lending Jody a hand will be series fan-favorite Sheriff Donna Hanscum (Briana Buckmaster – Arrow, Frequency), a relative novice to the hunter’s life, but a close friend who Jody can confide in.

Claire Novak (Kathryn Newton – Big Little Lies, Manchester by the Sea) was introduced to the supernatural world when her father became the vessel for the angel Castiel (series star Misha Collins). Now, a gifted hunter, she lives with Jody, but struggles against her rules.

Also taken in under Jody’s wing, Alex Jones (Katherine Ramdeen – The Tall Man, Almost Human) was rescued by the Winchesters from a family of vampires who used her as a lure for unsuspecting humans. Traumatized by the violence, she has resolved not to hunt…until a threat emerges in Sioux Falls that threatens her new family.

A new member of the Wayward Sisterhood is the character Patience Turner (Clark Backo – Designated Survivor), a high school over-achiever whose life is turned upside down when she discovers she’s a powerful psychic, a gift she inherited from her estranged grandmother (and season one Supernatural character) Missouri Moseley. Hunted by dark forces for her power, Patience finds refuge with Jody and her wayward family.

The spin-off will be introduced in an episode of SUPERNATURAL. WAYWARD SISTERS is written by Andrew Dabb and Robert Berens, who will executive produce along with Robert Singer and Phil Sgriccia.