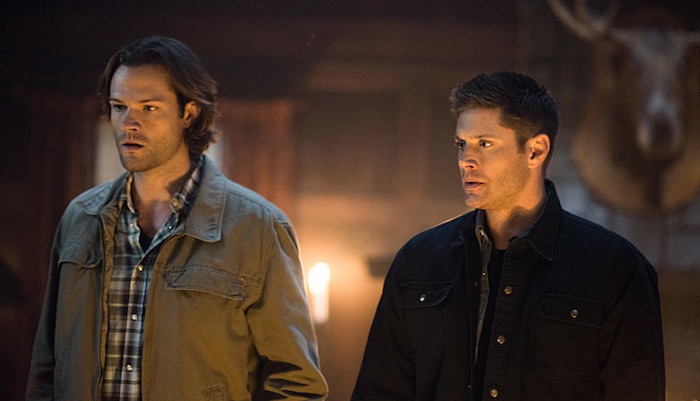 Three characters were killed in the last season finale of SUPERNATURAL and Sam and Dean Winchester were left with the spawn of Satan, while Mary and Lucifer were trapped in an alternate dimension. In other words, everyone is in the trouble — including the world itself. Lucifer and Kelly’s son, Jack, aged quickly after killing his own mother with his birth and now the Winchesters will have to deal with a being of immense power while reeling from the deaths of their friends and allies, as well as their mother’s disappearance.

Jensen Ackles, Jared Padalecki, Misha Collins and executive producers Robert Singer and Andrew Dabb came to San Diego Comic-Con to tease season 13 of SUPERNATURAL and what the Winchester brothers will be dealing with next season.

10.35 – Jared and Jensen filmed a cute little intro to the panel talking about heading to Hall H and Kansas came out to perform “Wayward Sons” live! (watch the video below).

10.41 – Richard Speight Jr and Rob Benedict came on stage to moderate the panel.

10.45 – Did they really kill Castiel? Singer said “we have to go with the story takes you” and the writers thought that perhaps Castiel’s time had come. As he said that Misha dragged his own little chair out on stage.

10.48 – Singer confirmed that Misha will be returning to the show.

10.49 – Dabb said that leading into season 12 the guys had the happiest situation they could have — their mom was back, they saved the world without having to sacrifice each other, and their friends were alive. But in season 13 “we just murder”, he joked.

10.54 – Jared and Misha recall the twitter pranks they’ve played on each other, including posting rude/embarrassing tweets on each other’s phones.

10.55 – How will Dean and Sam react to Jack? “Differently,” Jensen said. With their mom and Cas being gone, the brothers now have this person/thing/entity and “in Dean’s mind [he] just simply has to go”. But because Jack is half-human Sam wants to handle him differently and not simply kill him.

10.57 – Jensen jokes “why would anyone want to see how it turns out?” if they let Jack live. Jared reiterated that the Jack situation is a “nature versus nurture” argument. Sam, ever the optimist, wants to try to figure out how to handle Jack because he’s still Kelly’s son and Kelly was a good person. Dabb said that Sam is a character who was destined to do “very bad things” and he can put himself in Jack’s shoes a bit better. And Jack will struggle with his situation in their version of “Hell: My Two Dads”.

10.59 – Dean thinks that Mary is gone, that she went through the rift with Lucifer and then the rift closed. Singer says that Dean is convinced their mother is lost to them forever. While Dean is upset he’s prepared to accept it. But Sam thinks that Mary could still be alive — after all, the boys have traveled to other dimensions and returned. It will be a problem between the guys because Sam’s mission is “let’s find Mom” and Dean thinks they have bigger fish to fry. But Mary is definitely not dead. “Dean is kind of a debbie-downer at the beginning of the season,” Jared joked.

11.01 – Dabb said that it took Mary a while to find her footing with the world and her sons after she came back. But Mary made the sacrifice to kill Lucifer and go into the rift knowingly and she comes to terms with that, even if she’s still being active. The world she’s gone into is worse than the world where her sons are. Jack is the key to getting Mary back — but is opening that rift really something the brothers want done? It could threaten their dimension.

11.08 – Jensen likes that they’re never telling the same stories twice. There’s always new characters and new stories to tell. “We’ve had great seasons we’ve had maybe not so great seasons” but he’s always proud to be part of something that has lasted this long. Jared agreed and said that for him as well, life can has its ebbs and flows, but it’s wonderful. And to look out at the crowd after 13 years and see how many fans they have blows him away.

11.22 – “Baby is not a prop. Baby is a part of me,” Jensen said in response to a question about favorite props. He said that the weight of the angel blade really calls to him because he’s always spinning it in his hand and it’s like the “OG fidget spinner”. Meanwhile, Jared’s favorite prop is the demon blade. He said that it was actually put together incorrectly when it first appeared on camera. He found that out early on and whenever he has to handle it he’s conscious of that because when he pulls it out the blade is facing the wrong way.

11.25 – What fear would they die from if the curse in “Yellow Fever” was true? Misha joked his would be “being up on stage in front of a large number of people with my friends making fun of me”. Jensen said “about 13 years ago [being in this situation] probably would have killed me.” He thinks that being in front of a large crowd like this is “daunting”. He’s been able to face that, but years ago that would have been one for him.

11.29 – The final fan at the microphone asked which character would make the most interesting spin-off? Dabb said that they have a lot of strong female characters on the show, such as Jody, Alex and Donna and he thinks they would make a great addition to the SUPERNATURAL universe. Casting for the spin-off WAYWARD SISTERS was also announced today.