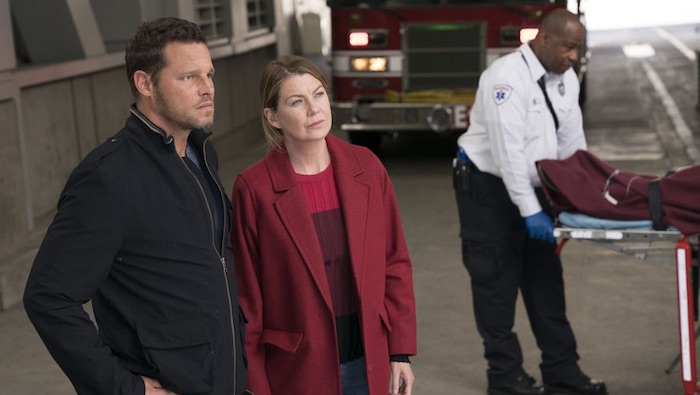 It’s incredible to think that GREY’S ANATOMY has been a part of countless lives for this many years. Some of us have grown up during the show; others are just now finding it via online streaming services such as Netflix. We’ve seen these characters grow, we’ve seen them fail, we’ve seen them succeed, we’ve seen them surpass obstacles that life has thrown at them and we’ve seen the storylines take turns that no other show had ever dared to do. Tonight’s all-new episode of GREY’S ANATOMY will be one full of nostalgia as they’ll be paying homage to the characters that made this show what it is today — one of the most beloved medical hit dramas to ever hit our television screens!

In the sneak peek below, we see Meredith tell Alex that she feels like she’s hallucinating as two young adults begin bickering whilst being trapped in a crushed and broken-off rollercoaster car — she’s immediately reminded of George and Christina. Alex, on the other hand, seems dumbfounded by her thoughts.

Meanwhile, during the promo, we immediately hear the song “Chasing Cars,” and, as you all know from watching this show, this song is extremely meaningful in Shonda’s medical hit drama as this was the song we heard when Izzy lost Denny during the second season and completely broke our hearts. Little did we know, we’d have a playlist full of songs that not only captured significant moments for the Grey Sloan doctors, but made every single one of us sob