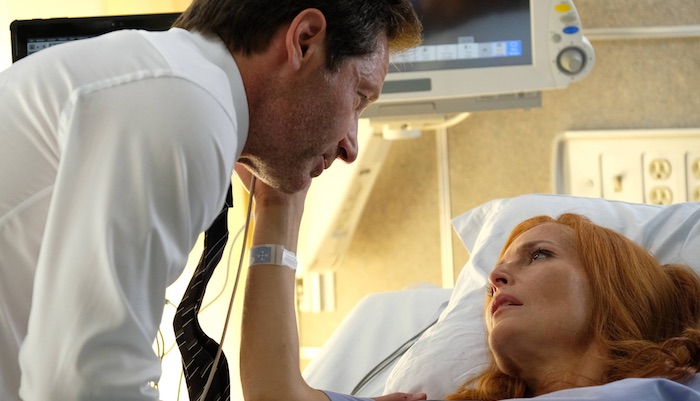 THE X-FILES is back…and yes, it’s another struggle. When we last saw Special Agents Fox Mulder and Dana Scully, humanity’s very existence was in jeopardy. Mulder himself was at death’s door whilst stuck on a bridge; and Scully, gifted with just enough alien DNA and super speedy science to manufacture a vaccine, was the human race’s only shot at salvation. Enter “My Struggle III” and a complete rewrite. Not only of the series’ mythology, which had already been completely re-tooled in the six-episode tenth season but also, more importantly, of one Dana Katherine Scully’s only sense of joy in THE X-FILES’ (original) final seasons.

When we struggle to find original episode titles, we also struggle to write ourselves out of a corner! When Mitch Pileggi called the THE X-FILES season 11’s first script “a head spinner,” that was an understatement. Unfortunately, whether the actor meant this in a positive way or not, what actually transpired in “My Struggle III” was brain-melting in the worst of ways. For starters, the script in question took the easiest and most predictable way out of a crisis: completely changing the story so as to make that crisis irrelevant.

As it turned out, every “My Struggle II” scene following Scully’s step into her Mulder’s office was nothing more than a “vision” while she was unconscious, having suffered some sort of seizure. Mulder’s life wasn’t in danger; Scully’s was. But Mulder had no warning that she would be sick because “She’s perfectly healthy. She’s a doctor. She would have told me.” (Ouch.)

Scully was rushed to the hospital, where Skinner and Mulder learned all about her abnormal brain activity. Skinner managed to  figure out that Scully’s brain was sending one message, over and over: “Find him.” Oddly enough, Skinner’s morse code interpretation was the only thing that made sense in this scene. Even binge-watching 13.5 out of 15 seasons of ER couldn’t make any of the medical mumbo jumbo make sense.

Really, the only thing that did make sense in any of this was that Mulder was, in classic X-FILES fashion, distraught over the thought of his not-romantic-at-all partner’s condition. As David Duchovny played what must be second nature to him by now — namely, playing a Fox Mulder worrying over a sick Dana Scully, all while expressing his character’s misplaced guilt over the whole situation — it became more clear than ever that the only thing saving this series was the leads’ ability to sell absolutely any fantastical story, especially the intense amount of love in their characters’ supposed non-relationship.

When Scully finally woke up long enough to share some longing looks and whispered words with her…whatever he is…she expressed her belief that she had seen the future. In the briefest of moments, when Fox Mulder Himself seemed as if he might be skeptical about something other than religion, Dana Katherine Scully reminded him of one very important thing: “It’s me, Mulder. I’m not an irrational person.”

And in the first of many, many reminders of Gillian Anderson’s talent in THE X-FILES‘ eleventh season premiere, Scully made the case for Mulder to actually leave her bedside in the only way she possibly could: by appealing to his emotions, his feelings for her, and less-than-explicitly stating her own feelings for him. “You’re dying, Mulder. And I can’t save you.”

Cool Man Mulder drives a lot, wears classy shades, scruffy face…not sure what he found at the end of his journey? After Scully’s soul-crushing admission that she couldn’t save the one person she loved most in the whole world her work partner, Special Agent Fox Mulder lived every middle-aged man’s midlife crisis: He drove around in a hot car, looking hot, with a hot woman waiting for him in bed (albeit a hospital bed) back home (in a hospital, which is basically home for these two). While he was cruising, THE X-FILES featured plenty of David Duchovny’s vocals, as Mulder shared his innermost thoughts with us via an Emo Mulder Voiceover Extraordinaire.

While Mulder was enjoying a joyride down the actual middle of the road, as well as an action fantasy sequence, Monica Reyes was busy lighting cigarettes and chatting with The Smoking Man about…whatever sociopathic garbage he was spouting. At one point, Reyes even asked Black Lung Bush if he thought Scully would forgive him; and I wondered whether she remembered anything about Dana Scully at all.

(First off, the answer to Reyes’ question? No. Second off, Scully’s name doesn’t get to pass your lips when you’re cheating on her with the enemy, in the grossest of ways.)

Basically nothing that came out of CGB Spender’s mouth made sense, which at least meant that this episode was consistent in its ability to be illogical and “a head spinner.”

So, Mulder was on a Sunday drive, and The Inexplicably Resurrected Tumor chatted with his new bff. As all of this was happening, Jeffrey Spender gave Mulder a call to let him know that there were people looking for his son. Because Jeffrey Spender was totally Fox Mulder’s best friend. He was Scully’s, too, which we found out when he appeared by her sickbed to chat about William. But we’ll get to William in a bit. Oh, yes.

At any rate, Mulder took a pit stop to meet with some nameless members of The Syndicate, learn about their plans to colonize space, and then remember that the only person who could save us was Scully. Time to turn that car around, buddy.

In summary, everything awful that Scully dreamed about was real. Spender was, in fact, alive. Reyes was, ridiculously, his henchwoman. And Scully remained the world’s savior. If only this mess of a story had ended with that revelation and absolutely zero others.

THE X-FILES’ most vomit-worthy betrayals. Back at the hospital, Scully had even more visions. She may or may not have also received a visit from William’s Uncle Jeffrey. Now, I’m going to assume this moment was another seizure dream, as it indicated that the formerly crispy man was now looking a lot better. And then there’s the whole mind-boggling reveal that Scully had asked Spender to help her hide William.

As I recall, it was Spender’s decision to pretend to be Mulder, then sneak into William’s room and inject him with magnetite without his mother’s consent, that was the proverbial straw that broke the camel’s back. It was, after all, following Uncle Crispy Critter’s visit that Scully gave up her miracle child in the first place.

But this is THE X-FILES season 11, so all bets are off — and not in a good way. Jeffrey was helpful in hiding William all along, which makes about as much sense as Monica Reyes swapping nicotine with the enemy or Scully thinking her son would be protected with not-her, so we’ll go with it.

More confusing was Scully’s realization, after I-lost-count-of-how-many brain attacks, that the images of humanity’s future death were coming to her from her own super-well-hidden son. Even that made some sort of weird alien miracle baby sense, but what was later revealed about William and his origins was nothing sort of disgusting.

After an episode full of Scully’s physical trauma, which included collapsing in Mulder’s office for a second time — but only after Scully told Mulder that he needed their son and she needed him — Skinner had an unexpected visit from everyone’s least favorite duo: Reyes and Emphysema Man. It was only fitting that the series’ most pivotal conversation would happen in a government-issue vehicle. Mulder had made his own Mustang commercial while Scully was busy wrecking her vehicle (because medical doctors don’t know not to drive when their brains are impaired, apparently), so Skinner deserved a car scene, too! And since so much of THE X-FILES’ core partnership involved never getting out of the damned car, the partners’ enemies deserved their own road trip to nowhere, too.

When Whatshisname rattled off some more nonsensical pseudoscience and conspiracy jargon, the main idea came down to just a few things: First, Skinner would need to betray Mulder and Scully in order to ensure his own safety. Secondly, the immortal Dana Katherine Scully would be safe, and she’d be asked to choose between William and Mulder…because that had never happened and gone awfully wrong in THE X-FILES history at all.

A flashback to the seventh season’s “En Ami” showed Scully questioning Sir Puffsalot about drugging her; and as he smugly answered Skinner when directly asked, he — not his son — had impregnated Dana Scully. Scientifically, not in the beautiful, old-fashioned way that everyone knows damned well happened in “All Things.” And in the worst invasion of a woman’s body autonomy on THE X-FILES since, well, all those other times Scully was violated.

For THE X-FILES to have closed out its eleventh season opener with this revelation is nothing short of disastrous. It taints one of the series’ few happy moments for our beloved agents in the worst of ways; and to start 2018 off with an old man, smugly admitting to having medically raped a woman even more times than previously believed…Well. That just opens a whole ‘nother can of worms and a future serious discussion of its own.

Here’s hoping that the “I WANT TO LIE” message at the beginning of “My Struggle III” was some sort of message that The Morley Man was lying to Skinner. Even that would be bad enough…But at least it wouldn’t be one of the most sickening admissions on television, coming from a series that’s been lauded for its inclusion of a feminist icon in one Dana Scully, in memory. We can’t create a token “strong female character” on the surface and then think things like this are in any way a good idea, much less creative.

Sorry, THE X-FILES, but that’s just not how any of this works.

Additional thoughts…if thinking is even possible.

The next all-new episode of THE X-FILES airs on Wednesday, January 10, at 8/7 on FOX.