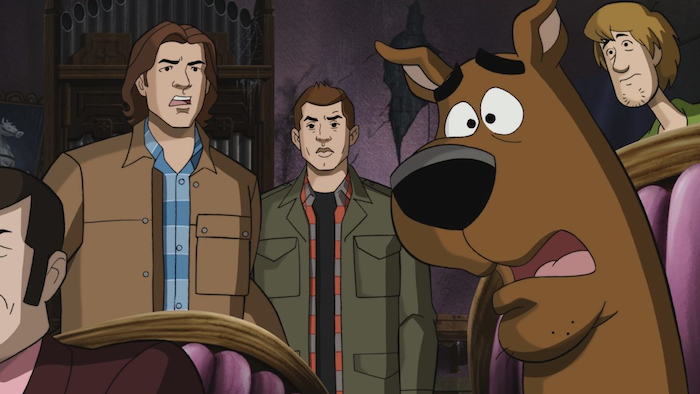 SUPERNATURAL has never shied away from meta episodes. Back in the earlier seasons Sam and Dean first met Chuck, an author who wrote a very meta book series about their lives (and was later revealed to be God himself). The brothers have also entered various television shows thanks to the Trickster (a.k.a. the archangel Gabriel) and were also transported into a world where they learned about their own real alter-egos (Padalecki and Ackles) who played Sam and Dean on a TV show. The show has also been animated once before, in the season 8 episode “Hunteri Heroici”, when Sam and Castiel entered an animated world briefly (although they remained real).

But SUPERNATURAL has never really done meta in the way they’ll do it this week with “ScoobyNatural” — a blend of episodes like “Changing Channels” and “Hunteri Herorici”. This time the Winchester brothers will be sucked into a real television show — specifically, into SCOOBY DOO. Growing up on the road as the brothers did, SCOOBY DOO was something of a cornerstone for Dean in particular and SUPERNATURAL has alluded to Dean’s love of the show before. But this time he’s utterly thrilled to get an opportunity to meet the Scooby Gang and solve a mystery with them. While Sam isn’t as enamoured with the possibility of dealing with this group of people who don’t at all believe in the supernatural, Dean convinces his brother that they have to play along with the game in order to get back to their own world. Later, Castiel gets sucked into the animated world as well and makes friends with Scooby and Shaggy in particular.

Thanks to PaleyFest and Executive Producer Andrew Dabb, we know that the idea for this episode came from Dabb’s friend, Jeremy Adams, who works in Warner Bros. Animation. While the SUPERNATURAL Writers played around with the idea of doing an animated episode even under the show’s creator Eric Kripke (who departed as showrunner at the end of season 5), the idea never really came to fruition until late 2016, when to Adams asked Dabb if he would consider the crossover. After SUPERNATURAL received an early season 13 pick-up, the script for “ScoobyNatural” was written and the majority of the voiceover work was done in April 2017.

Back in the fall, we visited the set of SUPERNATURAL, where Jared Padalecki and Jensen Ackles talked about SUPERNATURAL becoming part of the SCOOBY DOO mythology (and vice versa).

“I grew up watching SCBOOY DOO and I remember when the SCBOOY DOO movies came out, and they wanted me to try out for Shaggy,” Padalecki said. “I was young, and [Matthew] Lillard’s great — I fought not to do it. I don’t want to…. I’m a big James Bond fan, not that I could ever be James Bond. Someone’s like ‘would you try out?’ No, I wouldn’t, cause I wanna watch that as something I enjoy.”

“You don’t want to mess it up. You want to do it justice,” Ackles said, before laughing about how Dean makes sure to hit on Daphne in the episode (a crush that goes all the way back to season 2 of the show).

Watch our interview with Padalecki and Ackles below, as well as a behind the scenes featurette for the episode. Don’t miss the “ScoobyNatural” episode of SUPERNATURAL on March 29at 8:00 p.m. on The CW.