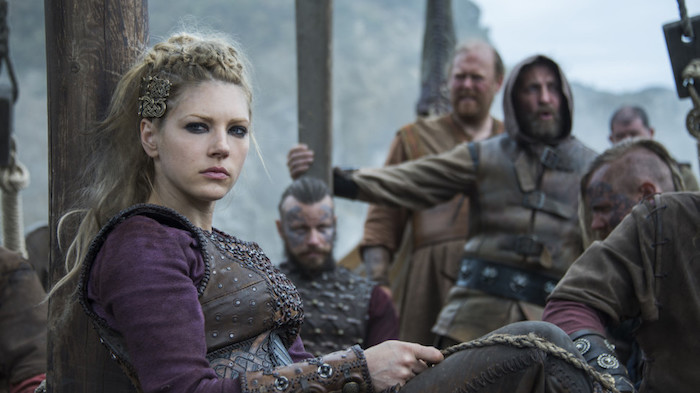 During VIKINGS’ San Diego Comic-Con panel today it was announced that the show would return for its season 5 midseason premiere on Wednesday, November 28 at 9:00 p.m. ET/PT.

In the season 5 mid-season finale, a face-off between the Lothbrok family and Ragnar’s sons ended with a victory going to Ivar the Boneless. Ivar also vowed vengeance on those who betrayed him and put a target on Lagertha’s back. Lagertha had lost her appearance as a fierce Viking warrior, but she’s still hopeful to regain her position in Kattegat as its rightful leader.

In season 5B a legendary Viking arrives — Duke Rollo (Clive Standen). He “causes further upheaval in a Kattegat still reeling from Ivar the Boneless becoming its King,” according to the History Channel. “As Bjorn (Alexander Ludwig) and Lagertha flee Ivar’s murderous forces with Bishop Heahmund (Jonathan Rhys Meyers), Ivar’s tyrannical reign over Scandinavia ushers in a new Dark Age, the likes of which have never been seen. Ultimately, Ivar’s reign will not go unchallenged by the sons of Ragnar and old enemies will become allies to defeat the despot who has declared himself a God on earth. Meanwhile in Iceland, Floki (Gustaf Skarsgård) battles the elements, and his own settlers’ desire for revenge, to forge a Viking colony on the beautiful and desolate landscape.” Watch a trailer for season 5B below.

Season 6 of VIKINGS is currently in production as well, with a premiere date to be announced in the future.