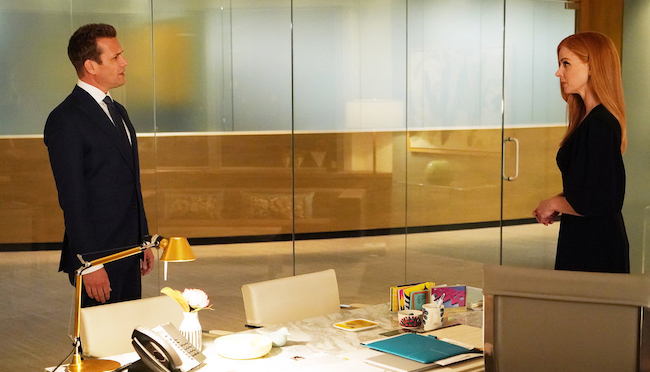 SUITS entered its final season after, at long last, defining the series-long will they/won’t they Darvey relationship with a firm “they will.” Seemingly as a nod to this big development, one of the first lines of the SUITS season 9 premiere, “everything’s changed,” became the episode title. Given the way that finally igniting a slow-burn relationship can have a huge impact on a series, one might be misled to believe that the Darvey of it all would fundamentally change everything about the story of Insert Firm Name Here.

But everything is just as it should be: The firm is in trouble, and there’s even a name change on the horizon. Characters that viewers have come to love are exactly who they’ve always been (unlike in certain seasons that will be forgotten forever, save for some key moments); and as for Donna Paulsen and Harvey Specter, Donna plus Harvey still equals Darvey. Just like always. Their interactions are back to making sense; they’re no longer awkward and stilted, no longer suffering from angst for angst’s sake and forcing the two characters apart just to prolong the inevitable.

Weirdly, one of the biggest weaknesses of some previous SUITS premieres has been exactly what made this final one great: It was the same old, classic story of a family of sketchy lawyers, banding together to save their butts from the consequences of their actions. And maybe, just maybe, Darvey happened to be the extra special cherry on top.

12 hours, all night. Not a dream, not a misdirect. Remember that time when SUITS opened 6B with Donna and Harvey in bed, only to reveal that the whole thing was a dream? Or what about the seventh season premiere, when Harvey was on a mission to ask out…not Donna? Thankfully, that kiss from the eighth season finale was not another lie; and neither was the absolutely sweet finishing opening moment of Darvey making love before finally calling it a night.

Across town, the world was still turning—Samantha Wheeler had to rush away from the boxing ring to deal with the Robert situation—but Harvey and Donna were in their own, separate world.

By the time morning came around, Harvey and Donna were back to doing what they’ve done so well for all these years: shamelessly flirting and bantering. There was a discussion of whether or not Donna might have told Rachel that Harvey was better the first time; and there was even a confirmation that everyone was happy Harvey came last night and would be coming again soon. Many, many times.

(Important because if this had been a one night stand, SUITS viewers of the Darvey-shipping persuasion might have been rioting in the streets.)

But just as the relationship conversation was about to get serious, the real world came crashing back in—in the form of Louis Litt, showing up at Donna’s apartment. The new couple briefly panicked, wondering whether or not they should let Louis know that Harvey had spent the night; but after realizing that jumping out a window and hoping to stick the landing on a sidewalk 12 stories down (12 is this couple’s lucky number!), Harvey also decided that there was absolutely no reason to hide.

Was the whole, “let’s panic and hide that we’re together” bit about as tropey as it gets? Yep! Was I still here for it? Absolutely! Was Harvey Specter, of all people, deciding to have no fear at all of sharing the news—because he was confident in this relationship from day one—exactly the type of growth this character had earned after all of these years? Confirmed. When SUITS wants to do something well, it does it so, so well…

While Louis couldn’t consciously fathom that Darvey might finally be banging, his subconscious was all over the truth: “The most important thing is, you guys were banging it out all night.” (In unison now, “that we were!”) Even with all the awkward glances and double entendres about Donna and Harvey both being “very good at releases,” Louis didn’t catch up. So, of course, Harvey wanted to know why: “I don’t get it. How could he be such a good lawyer and not see what’s right in front of his face?”

I’m not even going to begin to address that question…

Back to your regularly-scheduled SUITS programming. Right! There’s a firm out there, doing firm things!

Where were we? The Robert Zane fallout. Of course.

By the time Louis left Donna’s apartment, it was decided that Harvey’s job would be to help Samantha Wheeler keep all of Zane’s old clients; and despite the news that Robert had been disbarred for breaking privilege, the firm would keep his name on the wall. It’s not as if Insert Firm Name here has an unlimited “change the wall, the letterhead, and all the business cards” budget anyway, right?

Oh, wait. This is SUITS. It totally does.

While Louis kicked off his morning being too afraid to believe used to the status quo to realize nothing everything had changed for Donna and Harvey, Alex Williams was getting some exercise…only to be interrupted Steven Faulker from the New York Bar Association. Faulker told Alex that he “showed a lot of courage” when he pointed the finger at Zane; and he urged him, through the world’s least-veiled threat, to make sure that the firm removed Robert’s name from the wall.

And after that little surprise, Alex also found himself on the receiving end of a “thanks but no thanks” conversation with Thomas Kessler, who also wasn’t interested in having lunch with Donna because he knew what “he’s somebody who I can’t figure out how to cut out of me” meant. (Good. Bye.)

Consider yet another alternate title for the SUITS season 9 premiere: “Alex Williams’ Horrible, Terrible, No Good, Very Bad Day.” Or, perhaps, “Samantha Wheeler’s All of the Above.” Honestly, the only time Sam managed to have anything go her way was when she broke a few of Eric Kaldor’s bones for calling her Sweet Pea.

As Alex and Louis were busy trying to figure out whether or not the Bar could force them to take Robert Zane’s name off the wall, it was “Save the Clients 2k19” for Sam and Harvey. Despite their best efforts, though, neither Harvey nor Male!Harvey could manage to close the deal.

Further complicating matters, Harvey Headass lied to Sam about why he left in the middle of their heart-to-heart: When she guessed, during a Marvey-style evening of mid-case drinks, that Harvey had simply needed to be alone that fateful night, Harvey told her she was right.

To be fair, after Louis was finished cockblocking them, Darvey had changed their minds on the whole, “who cares if people know” thing. Donna decided to wait to tell the people they cared about until after they were through the latest firm crisis. (Someone should tell her that one of those always ends in another, so there’s never a perfect time to share good news.) But here’s the thing: Lying is never cool, especially when you’re in the middle of preaching about how important it is to stand by your family when they’re in trouble.

So, when Looselips Louis, who had spent most of the episode telling people that it was actually Harvey—not Robert—who had broken privilege, revealed to Sam that Darvey had been up all night “working,” she realized that Harvey was a big, lying liar.

Sam was so upset that she kicked Geriatric!Harvey’s ass the next day in the boxing ring—but only after Donna convinced Harvey that it was more insulting to do the whole, “I won’t hit a woman!!!!” bit to avoid squaring off against a trained athlete than it was protective. Also, there was this: “I’ll admit: You did pretty good—for a guy in his 70s.” Amazing.

After beating the crap out of each other and trading some friendly trash talk, Harvey and Sam were back to being SUITS’ latest working dream team. They were more sure than ever that Robert’s name had to stay on the wall no matter what, but that meant keeping clients that just weren’t willing to work with them.

And everything just kept falling apart.

Louis couldn’t get himself accepted as a keynote speaker at an ethics conference (can’t imagine why!).

So, it was time for Louis to ask Harvey to be his deciding vote in getting rid of Zane’s name after all. And, since absolutely nothing has changed on SUITS, that conversation happened just in time for Sam to overhear it and become extremely upset. It was the final straw that broke Harvey Camel’s back. As much as he hated to do it, he brought Kaldor the clients—Harvey’s own—that he had wanted in the first place. It was the only way to save everyone he cared about without having to choose which partner to betray.

The move might not have been one  of taking full responsibility for his and Donna’s actions, but it was something on the road to maturity.

With the latest firm drama settled, it was time for repairing Donna and Sam’s relationship. Donna apologized to Sam for being responsible for her loss but was honest, saying she wasn’t sure that she would have done anything differently. Rather than letting Donna completely take the blame, Sam let her know about Robert’s guilt over what he’d done for her years before.

And then all was happily-ever-after at the firm…until someone from the Bar came, gave Louis an ultimatum, and closed out the episode. Cool.

And now, a word from our Darvey sponsors. The SUITS premiere might have ended with the arrival of Faye Richardson; but we’re going to go ahead and pretend like the scene that immediately preceded it provided the true final moments.

Harvey finally told Donna why he came by her apartment that night, and he did it by having her help him christen meet him at Mike Ross’ old apartment. Evidently, Harvey has kept his son’s personal space the same way as he left it, all in hopes he might come back one day. He was supposed to find a tenant but opted to make up a fake one—using the name of the candidate who didn’t show up on the day that he ultimately hired Mike—instead. When it was time to have the most open moment of his life, Harvey’s decision to keep the place paid off.

Mike’s apartment used to remind Harvey of everything he had lost; but now, all it made him think about was how much Donna had helped him to accept. Like, you know, his mother? Remember that time SUITS tried to convince us that Paula was the “someone special?” Totally never happened now! Thank God!

Lots of loving looks and raw emotion later, Harvey confirmed what we’ve been saying all along here: “because once it hit me that we should be together, it felt like we’ve always been together.” It felt like that because it was reality…Prove me wrong.

And then, he basically told Donna that he loved her for the 50th time in “Everything’s Changed.” Darvey kiss. End episode. See you next week.

Catch the next all-new episode of SUITS on Wednesday, July 24, at 9/8c on USA.