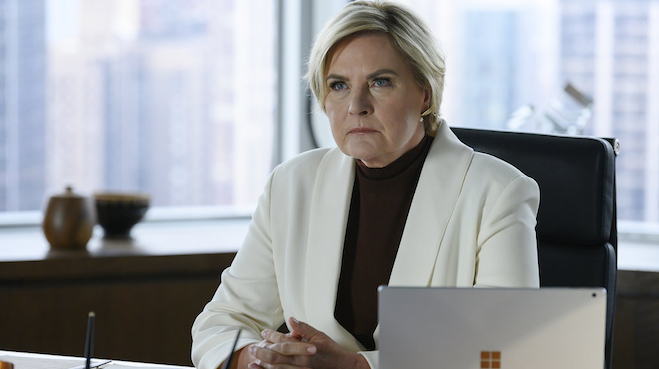 SUITS’ final season is officially four-for-four with great storytelling, from top to bottom. Its latest episode was yet another reminder of everything that’s ever been good about the series. From day one, the theme of the firm as a found family has been integral to all of the best arcs; “Cairo” was a continuation of that tradition. When Faye Richardson continued to attack Donna Paulsen’s position at Firm Whomst, and an old frenemy attempted to attack Alex Williams, the family swooped in to protect their own. As they do. But it wasn’t just this non-traditional set of relationships on display: When James Paulsen came for a visit, Donna and Harvey had to work on that family before losing everything.

Frak Faye. Rating Faye Bitchardson Richardson as a Big Bad is easy: She’s the absolute worst. In “Windmills,” she tried to demote Firm Whomst COO Donna Paulsen to her personal secretary; that was, of course, when she wasn’t outright daring Harvey Specter to do something illegal, all while threatening to fire him if he did.

That brings us to “Cairo.”

Here’s the good news: Faye had the impeccable taste and common sense to ask Katrina Bennett to adapt a code of conduct for Firm Whomst. She was even smart enough to agree to Katrina’s terms: “I write the code as I see fit. You accept it wholesale or not at all.”

The bad news: Literally everything else Faye did in the latest SUITS episode, including breathing, was offensive as…well, you know. It starts with “F.”

Of course, breathing was a minor infraction compared to demanding that Donna give up her vote—since that whole, “hey, you’re just a secretary again” scheme failed, let’s just hit harder!—because of her relationship with Harvey. The resident demon even went so far as to outright confirm Donna’s suspicions that she saw Harvey’s vote as more important. As an extra slap in the face, and in a false effort at appearing “fair,” Faye told Donna that she could always discuss the problem with Harvey.

We’re out here, attempting to drive a wedge between Darvey after thousands of years of waiting for them to get in bed married together; so, the new policy at the firm of Lieberman & Nope is that Faye must die.

Faye claimed taking away everything that Donna had worked for, all because the man she’d been in love with since the year 0 finally grew up enough to be with her, was because of some “undue influence” Donna and Harvey had on each other. As if finally banging created that “clear conflict” or whatever? Please. Harvey Specter has been wrapped around Donna Paulsen’s little finger since before the Big Bang. Next.

Initially, rather than discussing the vote problem with her future husband boyfriend, Donna attacked him when he came to see her in the copy room. Donna had a very real concern about the bad blood between Harvey and her father, but all anyone who didn’t understand the bigger picture needed was to see Donna’s pained expression when she turned away from Harvey, plus this one line: “I shouldn’t have to give up something that’s important to me just because I’m in a relationship with you.” Even Harvey, blindest of the blind, knew that something more was at play; but, rather than press the issue, he ran away with his tail between his legs when instructed.

After her fight with Harvey, Donna had another pointless conversation with Faye. She tried to explain that keeping both her vote and Harvey’s actually benefited the firm: “We don’t just influence each other; we balance each other. We make each other consider opposing points of view; and then, in the end, we do what we think will make the firm stronger—whether we’re in agreement or not.” (Excuse me while I melt over the perfection.)

But, proving yet again that she did not deserve to breathe anywhere near Donna or at all, Faye refused to listen. She said she wouldn’t make exceptions for the Future Mr. & Mrs. Specter’s (Mrs. & Mr. Paulsen’s?) “individual circumstances,” so Donna went for the kill shot by bringing up what happened between Faye and her ex-husband.

Petty? Yes. Loved it? No doubt.

…but even that didn’t work. So, when she learned that Harvey had made the situation with her father worse, Donna lashed out a second time. But unlike in their first fight, Harvey wouldn’t let the conversation end until he found out what was actually making Donna so upset. When he asked why Donna didn’t tell him about Faye sooner, she admitted that she didn’t want to hear him say that his vote was more important.

And his quiet “I wouldn’t have said that” was gut-wrenching.

Unfortunately, the pain was about to get worse. Just as he was attempting to recover from Donna’s confession, Harvey got into a nasty fight with Louis over what was more important: saving Donna’s vote or getting Gretchen back. Unlike in previous seasons, though, Harvey swallowed his ego and apologized to Louis for his lack of respect.

Oh, and he also had a plan.

Which brings us to…

Firm Whomst Family. Harvey’s solution was simple: Get everyone who mattered—the whole family—to demand respect from Faye. But it went deeper than that. When Firm Whomst’s Scooby Gang boss-walked their way to the demon’s office, they had also worked out a way to free Gretchen from her clutches and protect Donna’s vote.

What did the plan rely on, folks? That’s right: Making it clear that the members of this firm are a family. Dysfunctional, sure. But family.

Every single name partner took advantage of their right to waive the (non-existent!) conflict in having a soon-to-be-married couple the indivisible entity that is Darvey have two votes. When Faye tried to push back, the partners each shared the many, many ways that they’re more than just coworkers and friends. There was Louis’ reminder of “Harvey and I came up in the bullpen together” (I cried); and Sam shared that she had attended family dinner at Casa Williams, also home of the man who took Louis on a bowling date.

When Faye still didn’t understand that she should F off forever Firm Whomst is not your average firm, the solidarity stepped up a notch. Louis threatened to resign. So, too, did the remaining names on the wall (whichever those are at this point—nobody knows)—which meant embarrassing Faye and forcing her to explain to the Bar “why every name partner left because you wouldn’t accept our legal right to waive conflict.”

With that, Ms. Bitchardson had no choice but to stop her anti-Donna campaign and return Gretchen to her rightful work home.

Let this be a lesson, in case you haven’t paid attention to SUITS for the previous 127 episodes: Nobody messes with this family.

That also goes for Craig Cameron (not Craig from DEGRASSI), who spent “Cairo” attempting to blackmail Alex Williams into taking his shitty Panasonic deal, all because he didn’t share a client years ago. The client in question, Masterson Construction, was the client whose case involved Tommy Bratton covering up a murder. But somehow, despite now knowing there had been foul plan, Craig still felt that Alex owed him.

In the present day, though, Alex had a new family member: Samantha Wheeler. And when Alex asked her to tank her case, she knew something was wrong. Sam warned Alex against doing something shady to get Craig off his back; but after being approached by Alex’s wife, Sam found the perfect way to turn the leverage around on Craig. But she didn’t give Rosalie enough of a “map” to do the dirty deed herself. Instead, Sam put herself at risk.

Asked why she took the fall like that, Sam told the Williamses that she saw what they had (family!) and wanted to protect it.

Yes. Protect family at all costs. That’s what we do on SUITS. Period.

Also, let’s go ahead and start a Darvey family…

Forever!  After starting her day with “a handsome coffee for my handsome man,” Donna’s day went downhill pretty quickly, thanks to Faye‘s refusal to drop dead.

Sadly, the work drama wasn’t the only difficulty Donna faced. Daddy Paulsen was in town, and Donna wanted him to instantly fall for her new boyfriend. But unfortunately, Mr. Paulsen had a nasty history with Harvey. Donna was convinced that her dad would be happy for her when he saw how happy she was. That is, however, just about the opposite of what happened.

When Donna told her dad the news, he had some concerns about how “selfish” Harvey could be, but Donna (finally) knew she was Number One in his life: “Dad, if this has to do with Mike Ross, Harvey would throw himself in front of a train for me.” (F is also for “facts,” like this one.) She left her father-daughter time feeling discouraged (at best), which made her demand that Harvey figure out a way to fix it.

There may have even been a “what are we doing” comment in there, but that would imply a threat to end the relationship so we’re not going there.

Harvey called his mom for advice; she told him to make some kind of gesture. And, as Harvey sometimes does, he took a problem and turned it into a disaster. No, you shouldn’t meddle in your girlfriend’s father’s business deal after you’ve repeatedly implied that he’s the worst businessman ever. How can someone as smart as Harvey be so stupid? (The greatest mystery of SUITS, to be honest.)

Thankfully, the whole Faye mess made Harvey open his eyes and realize that what he really needed to bring James was respect. So, he invited his girlfriend’s dad over for drinks, complimented him on how he’d managed to win back Donna’s mom, and essentially confirmed that James would give Donna away (icky tradition but whatever) at their wedding.

Somewhere in there, James said he didn’t realize Harvey was such a hopeless romantic; and all I could wonder was how Daddy Paulsen had never seen the way the man looked at his daughter when she so much as breathed.

With everything worked out (as always happens for Mr. Best Closer In The City™) , Harvey was ready for an engagement to spend the night in bed, celebrating Darvey’s future nuptials with Donna, and then there was…Wow.

SUITS gifted shippers with a lot of flirting about being “together forever” and how Harvey should ask Donna to marry him. Darvey even swapped turns with making each other speechless; and the only thing that stopped Harvey from dropping dead in panic was a phone call from his mom, who finally got to “meet” Donna.

…and SUITS 9×04 ended with Donna telling Lily all about the (actually perfect for them) engagement, all while Darvey made gooey eyes at each other.

For the record, all of the marriage talk means they’re engaged. It’s canon. I will take no arguments. Literally no one cares if Harvey thought he was just joking; besides, it’s not like these two morons haven’t been married without knowing it all this time.

It’s fine. Death is fine. See you next week.