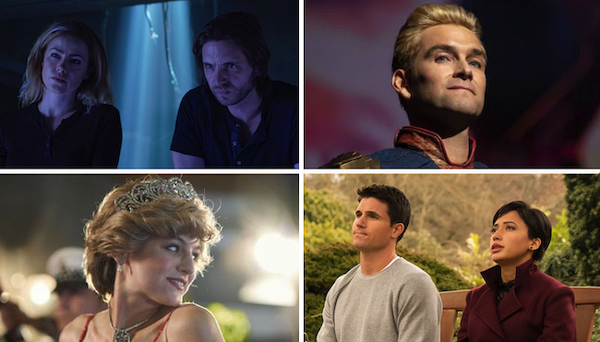 Back in March 2020 when Toronto went into its first lockdown, my Netflix list had over 200 titles. And that was just a single streaming service. But with everything closed and nothing to do, streaming was the very thing I could tackle. And so I began the various marathons that have carried me through the pandemic. Focusing on one show at a time, I resolved to get through as much of the backlog as I could and enjoy new series as they were released. These shows have entertained me throughout the last 10+ months. And while there have been some misses (I just couldn’t get into THE OFFICE despite giving it 3 seasons), I’ve got some recommendations for you. There’s a mixture of old and new shows here, as well as comedies and dramas and scripted shows and documentaries. And since there’s a lot of shows, I’ll be dividing this series into three parts.

12 MONKEYS (Canada – Amazon Prime Video; US – Hulu): I’m so sad that I slept on this show when it originally aired on Syfy. The 1995 movie of the same name starring Bruce Willis and Brad Pitt is a jumping off point for the show, but I dare say I enjoyed the show far more than the movie. A man, James Cole, travels back in time before a pandemic and encounters Dr. Cassandra Railly, a virologist whose message in the future leads Cole and his time-travel machine creating mentor, Katarina Jones, to believe that she can help them stop the pandemic from happening. The show flits between various years and thoroughly examines the issue of causality in a way that doesn’t annoy me because it actually takes the time to do it thoughtfully. There’s a cast of thoroughly interesting supporting characters (I dare you to tell me Deacon doesn’t go from villain to your favorite character by the end of the show). And while this is an extremely involved serialized show, there’s also some almost stand-alone episodes that involve a time period of the week trip (the episode involving an auction house heist is particularly delightful). In addition, I had heard the series finale of 12 MONKEYS described as one of the best and I’m happy to confirm that it absolutely is. Because this is a show about causality, the finale wraps up the entire show in an incredibly satisfying way. And it made me cry.

BRIDGERTON (Netflix): BRIDGERTON is GOSSIP GIRL meets PRIDE AND PREJUDICE. It’s a guilty pleasure, but it’s also fun. Taking place in the 1800s, the first Shonda Rhimes show for Netflix focuses on a small group of wealthy families who are navigating the “season” in London, England. There’s fake relationships, forbidden romances and a newsletter that reveals all of the secrets of the “ton” (the wealthy families that surrounded the palace court). BRIDGERTON isn’t flawless by any means, but it’s still enjoyable in a way that soap operas are. There’s gorgeous costumes, delightful language, and wealthy intrigue. While a second season hasn’t yet been announced, there’s a good chance it will happen. That said, the first season comes to an end that feels satisfying. And the good news is, you learn the identify of Lady Whistledown, the writer of that newsletter.

THE BOYS (Amazon Prime Video): THE BOYS isn’t the MCU. While Captain America and Thor may be virtuous heroes, the superheroes of THE BOYS are psychopathic or the bad guys. Season 2 of THE BOYS came out during the pandemic, and while I didn’t initially enjoy it as much as the first season, the show did pick up a lot as the season went on. Regardless, THE BOYS is an interesting show (assuming you can stomach the gore). And Homelander, one of the most powerful and popular of the superheroes, remains one of the most complex and interesting characters on television. He’s played by Antony Starr, who clearly gives all he has to the role. What thrilled me the most about the second season was actually the set-up for the third season, which now puts our actual heroes in interesting positions that they (and we) hadn’t foreseen.

THE CROWN (Netflix): Admit it, you’ve been waiting for the Princess Diana season of THE CROWN this whole time. Technically I’ve been watching THE CROWN since the beginning and I’ve enjoyed this show immensely. But we’ve all been waiting for the introduction of Princess Di. And yet, there’s an undercurrent of despair that hangs over the fourth season. Not only because of the overall subject matter (watching Diana’s struggle as she adjusts to the royal family and a loveless marriage is difficult), but because we know how this fairy tale tragically ends. Emma Corrin embodies Diana so well, down to her very mannerisms, and she generally nails her voice too. Gillian Anderson is also terrific as Margaret Thatcher. And while her voice and manner of speaking can become occasionally tiresome, I admire her absolute commitment to the role. While THE CROWN has always been a series focused on women (after all, the show’s most important character is female), season 4 seems to be focused on three women – Elizabeth, Margaret and Diana — in a way that explores each of their powerful roles in the monarchy and on the world stage.

MCMILLIONS (Canada – Crave; US – HBO Max): Are you familiar with the McDonald’s Monopoly game contest? Well, over the entire 1990s, that contest was primarily rigged by a security manager who had access to the game pieces. As he distributed prizes to a group of friends and acquaintances, his actions eventually caught the notice of the FBI. This documentary series is beyond delightful with a crazy cast of characters, even though the subject matter can be a bit tragic as people get their comeuppance. FBI agent Doug Mathews is also the best part about this show and his eclectic personality will never fail to make you smile. This is a quick binge overall at only six episodes, but this crazy story will keep you hooked from the first moment to the last.

UPLOAD (Amazon Prime Video): The best show to ever deal with the afterlife will always be THE GOOD PLACE, but UPLOAD comes in a close second. Robbie Amell, previously of various CW shows, really becomes a star in this series, showing he can do both comedy and drama. The show centers around a futuristic world, where people can “upload” their consciousness at their time of  death to various virtual “resorts” that will allow them to continue living out their days for eternity. Amell’s Nathan is guided through the afterlife by technician Nora, who also seems to develop a bit of a crush on her charge. Along the way it deals with issues of classism and what death really means in the grand scheme of humanity, all under the guise of a pretty humorous comedy series. There’s also the question of exactly how Amell’s character died, lending an air of mystery to the series. The good news is the show has already been renewed for a second season.

WANDAVISION (Disney+): Technically only a few episodes of WANDAVISION have aired at the time of this article, but I’m so delighted to finally have some new MCU content for the first time in a long time. The pandemic pushed back Marvel’s plans to unveil its slate of shows that was originally supposed to debut in 2020. And while I’m eager to watch THE FALCOLN AND THE WINTER SOLDIER (originally the first MCU show that was supposed to be released), WANDAVISION is an absolute delight. You can tell that Elizabeth Olsen and Paul Bettany are living their best acting lives in this off-the-wall series that pays homage to beloved shows such as BEWITCHED and (in episodes to come) THE BRADY BUNCH. And while some people might think that this unusual series is a departure from the MCU, it’s clear there’s an undercurrent of something sinister behind the live audience laughter. I, for one, can’t wait to see how it ends.