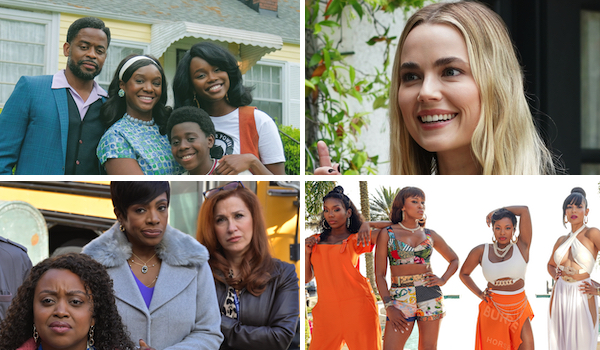 In addition to announcing ther 2021-2022 primetime schedule, ABC has also released trailers for several fall and midseason new shows that are coming to the network.

QUEENS (Tuesday, 10:00 p.m.)
The show centers around four women in their 40s who have become estranged and out of touch over the years. But they’re reuniting now for a chance to “recapture their fame and regain the swagger they had as the Nasty Bitches – their ’90s group that made them legends in the hip-hop world.” The show stars Eve as Brianna aka Professor Sex, Naturi Naughton as Jill aka Da Thrill, Nadine Velazquez as Valeria aka Butter Pecan, Taylor Selé as Eric Jones, Pepi Sonuga as Lil Muffin and Brandy as Naomi aka Xplicit Lyrics.

THE WONDER YEARS (Wednesday, 8:30 p.m.)
Inspired by the award-winning series of the same name, this new version of THE WONDER YEARS “is a coming-of-age story set in the late 1960s that takes a nostalgic look at a Black middle-class family in Montgomery, Alabama, through the point of view of imaginative 12-year-old Dean. With the wisdom of his adult years, Dean’s hopeful and humorous recollections show how his family found their “wonder years” in a turbulent time.” The show stars Don Cheadle, narrating the series as adult Dean Williams, Elisha “EJ” Williams as Dean Williams, Dule? Hill as Bill Williams, Saycon Sengbloh as Lillian Williams, Laura Kariuki as Kim Williams, Julian Lerner as Brad Hitman, Amari O’Neil as Cory Long and Milan Ray as Keisa Clemmons.

ABBOTT ELEMENTARY (Midseason)
This workplace comedy centers around a group of dedicated, passionate teachers — and a slightly tone-deaf principal — who are brought together in a Philadelphia public school “where, despite the odds stacked against them, they are determined to help their students succeed in life. Though these incredible educators may be outnumbered and underfunded, they love what they do — even if they don’t love the school district’s less-than-stellar attitude toward educating children.” The series stars Quinta Brunson as Janine Teagues, Tyler James Williams as Gregory Eddie, Janelle James as Ava Coleman, Chris Perfetti as Jacob Hill, Lisa Ann Walter as Melissa Schemmenti and Sheryl Lee Ralph as Barbara Howard.

MAGGIE (Midseason)
Based on a short film, MAGGIE “follows a young woman trying to cope with life as a psychic. Maggie regularly sees the future of her friends, parents, clients and random strangers on the street, but when she suddenly sees a glimpse of her own future, Maggie is forced to start living in her own present.” The show stars Rebecca Rittenhouse as Maggie, David Del Rio as Ben, Nichole Sakura as Louise, Angelique Cabral as Amy, Leonardo Nam as Dave, Ray Ford as Angel, Chloe Bridges as Jessie, Kerri Kenney as Maria and Chris Elliott as Jack.